Before the show started, a video was shown featuring a ton of different celebrities sending their love to Manchester.

It is truly beautiful that this brought together so many people, not just celebrities but over 50 different countries were watching live, and I am sure many other countries are watching different clips on YouTube right now.

Take a moment and see all of the shout outs!

I absolutely love anything acapella, well for the most part. I have stated in the past that I am not a huge Jimmy Fallon fan but I can appreciate when it puts together things like this. It’s very ‘Pitch Perfect’ if you ask me!

This is of course to promo the new movie ‘Sing’ that stars a slew of stars, that are all basically in this video. Tori Kelly, Reese Witherspoon, Matthew McConaughey, Scarlett Johansson, and more!

To all of my readers, I hope that you have a great holiday season! 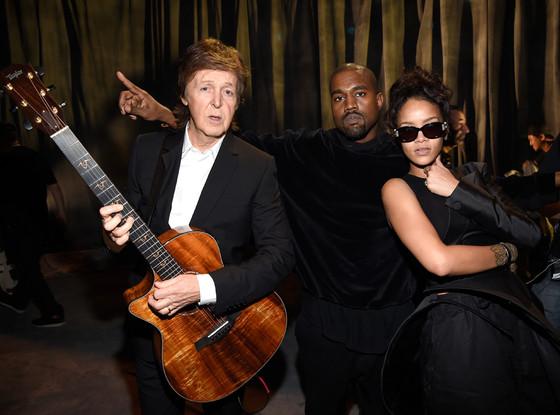 BEST PERFORMANCE OF THE NIGHT, HANDS DOWN!!

I will go out there and say that this was the best performance of the night! Rihanna looked absolutely incredible too, her vocals were on point. Then you have Kanye who is just a little weirdo killing it on stage. Yeah, I think that Kanye is a weird dude but I love him. Paul McCartney is such a God he literally just needs to stand there and play the guitar and he crushes it.

Rihanna looks so incredible though, right? Like Rihanna is my ultimate woman crush, over T.Swift, which is really saying a lot. I am glad she changed out of her giant loofa looking dress, Seeing her with her hair all sleek, wearing all black, I just can’t get enough!

Rihanna is back, you all better watch out!

A lot of people have been hating on this song because of Kanye’s singing and I can see why people wouldn’t like it. Judging by the new music Kanye has been releasing we are in store for something very different. Then there is the perfect Rihanna. I am a fan of everything that Barbadian beauty does, other than dating Chris Brown. Everything other than that though, she is perfect. Her looks, her voice, her tattoos, love ’em!

You know people have been making a huge deal about Paul helping Kanye out so much with new music, in fact producing Kanye’s new album. Those haters must not remember that Elton John helped him produce an album before too, and it was incredible.

I truly believe that Kanye and Rihanna should make an entire album together, I have always love them together. Instead of Watch The Throne with Jay-Z he should have made an album with Rihanna. Just sayin!

Alright, anyway I love that they are doing more raw vocals, well Rihanna is. It just proves that she can actually sing.

Little side note, Kanye singing about the sun shining with a straight mean mug face, easily my favorite part of the entire thing.

Rihanna’s new album needs to come out like right now, do you agree?