There are two types of women in this world, well I mean there are many different types but there is the wife, and then there is the side chick. This story hasn’t been confirmed by either party but I would like to say one thing. Elaina Watley, you sending does make you a bad bitch, but if you don’t end things with him, then it makes you look real bad.

Apparently Elaina and Victor have been together for a long time, they also have a three year old daughter together. She was by his side when no one thought he would make it into the NFL, and according to mediatakeout.com she is one of the most loyal women out there!

To be honest, these side chicks are horrible. Anyone who steps into a relationship or steps out of one to cheat, is disgusting. I doubt that any of these women were surprised though. They probably saw this text and got sad for a second, then moved on to the next NFL player that slides into their DMs on Twitter.

Judging by how she basically said that she knows about them but they mean nothing to him, I don’t know. I don’t know how I feel about this.

I guess it will all come down to if she leaves him or not. I am guessing that he may put out a public apology about his actions, and then she will say she forgives him because love conquers all.

Last year I wrote up an article with the ten hottest players (hottest players )  but then I realized I really narrowed myself down, a lot. I mean there are a lot more than ten hot football players, so lets just add a few more spots! Let’s give the people what they want! In reality, I just couldn’t decide who should be where, so I wanted to make my list bigger. There will be some repeats but hey, hotness stays hot for years usually!

So here we go, there are also some facts about them so maybe when you’re being forced to watch a game you can throw some of them out there! Just trying to help you out! 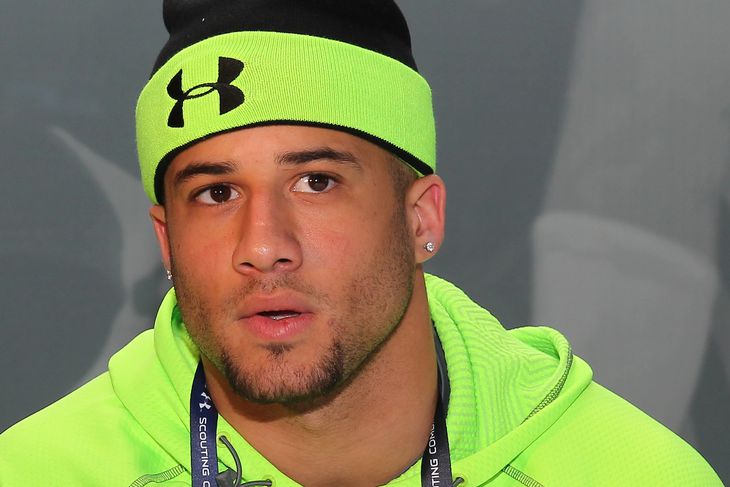 Know why I like this guy? It is because he does a little dance every time that he gets a touchdown, his own little salsa like dance and I am about that life. If you want to go and do a dance after you get some points, you do that dance! Some stats on this man, he is 6’0″ and plays for the New York Giants!

So this is Russell Wilson, the quarterback for the Seattle Seahawks and he is adorable. Now he was the Superbowl MVP last season and apparently he is going to be really good this season too! I don’t know, I just over hear these things. Anyway, he looks like a little teddy bear and I love it!

Now for a little while I thought that Aaron Rogers was one of the hottest guys on the planet, then I googled his name and realized I didn’t actually know who Aaron Rogers was. He is attractive for sure, reminds me of an old Jason Wahler from Laguna Beach. I will say I am a big fan of him when he is wearing a hat, so there you go! Also he is a quarterback for the Green Bay Packers, some facts right there for you!

You don’t just marry Laguna Beach’s ultimate bad girl Kristin Cavallari by being a good football player, you also have to be insanely attractive. Let me introduce you to Mr. Kristin Cavallari, Jay Cutler. Look at that jawline, that messy helmet hair, and those blue eyes. I see why you wanted to get with him Kristin, I appreciate your taste in men. Another quarterback, can ya believe it?

Remember this guy? Miles Austin is famous for dating Kim Kardashian for about a minute and also for being a really good football player! Who would’ve known? Austin plays for the Dallas Cowboys and he is a receiver for the team, so that is cool. Anyway with those dreamy blue eyes and gorgeous smile, how can you go wrong?

Cam Newton is an absolute babe for multiple reasons, but mostly, let’s just focus on that gorgeous smile he has going on right there. How can you not love that smile? Just another quarterback on this list, can’t go wrong with a team captain either. He plays for the Carolina Panthers and he is extremely attractive. Use that fact when your boyfriend asks if you know anything about football!

I don’t know much about Mark Sanchez other than he is extremely attractive. I have heard that he isn’t the best quarterback in the world but hey, I don’t really care. Look at those hazel eyes, so cute. He was on the Jets but I guess he didn’t do well because now he is on the Eagles where maybe he will do better? It doesn’t matter, he is a hot version of Fez and that is all that matters.

Just because Tommy boy was my man crush Monday that doesn’t mean that he automatically wins this contest of being hottest NFL player. He is one of the hottest, that is for sure but he is just tpo three in my opinion. Alright? Just because you win one week doesn’t make you the king! He really does win right? One of the best quarterbacks of all time, insanely attractive, and married to a billionaire super model? You basically win at life Tom.

Reggie Bush you are a God among men, that is all that needs to be said. I am also very happy he never married Kim Kardashian, just her look alike.

Julian Edelman is a wide receiver for the New England Patriots and he is hotter than Tom Brady! You hear that? Everyone can be all in love with Brady and Gronkowski and I will just be over here loving Edelman because look at him. He kind of reminds me of a more manly David Beckham and I don’t hate it. In fact I love it. Those blue eyes, that scruff, his dimple chin, I love it all!

So there is your list of the most attractive NFL players in the league at the moment! I also hope that I gave you some helpful facts when you are forced to watch a game. Whip out some of that knowledge and you will blow some minds.

Be Sure To Check Out The 2015 Hottest Players!