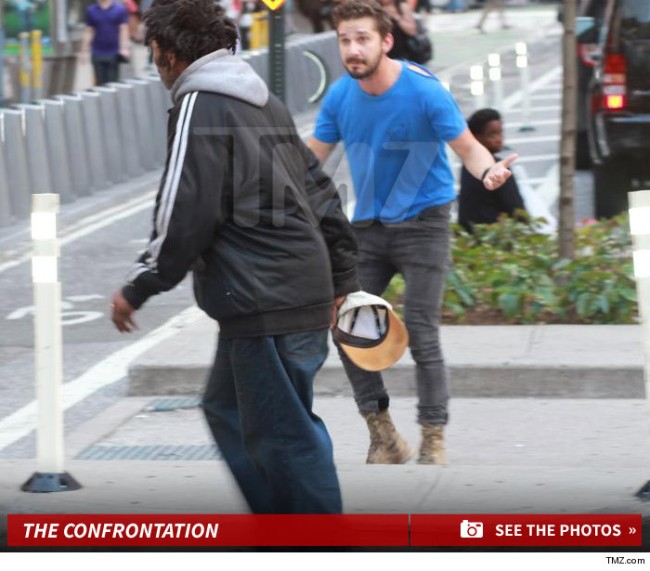 I would say that the past day and a half has been a real shit show for Shia LabBeouf, wouldn’t you agree? So unless you have been living under a rock, or actually living a normal life you have probably heard of his recent antics. No, you haven’t? Well let me fill you in. He got thrown out of a play for being disruptive, he was then arrested and spit on cops, earlier that day he was chasing around a homeless man trying to get the man’s hat. Above is a picture of that happening courtesy of TMZ.

The second theory I have is much more realistic in my opinion. Remember back when Joaquin Phoenix decided to get a little weird but in reality it was for some mockumentary that no one ever saw? Yeah, that is what I think this is. Shia isn’t really crazy, he is just putting together a little documentary on how to act crazy without being crazy. I mean he wore a damn bag over his head at his latest premier. That is crazy but hey, it worked, people were talking about it! It is my little banner because I love it so much.

Either way Shia isn’t famous enough for these kind of stunts. Well obviously he is since he is getting this kind of press coverage but in my opinion he hasn’t done enough movies or anything. He did the Transformer movies, Disturbia, Lawless, and a few others but most have been small indie films. Most people still know him, well Transformers but also as little Louis Stevens. What happened to that funny little fucker?

I have to admit, I can’t wait to see what kind of antics he puts on for the Fury premiers that he is going to have to go to. Brad Pitt will not put up with his foolery, that is for sure.

What do you guys think is going on with him? One of my theories or do you have some of your own?