So let me be clear, I am going to tell you this before you listen to the song. Don’t compare it to their old music. Their new music will never be as good as their old music simply because there is no Lisa “Left Eye” Lopez.

Okay, now that I put out that PSA.

This song isn’t too bad. I like the sound of it, I could definitely picture putting it on during a party and having a drink to it.

I will always respect TLC, so I will not say anything more!

It’s just good to see them back. 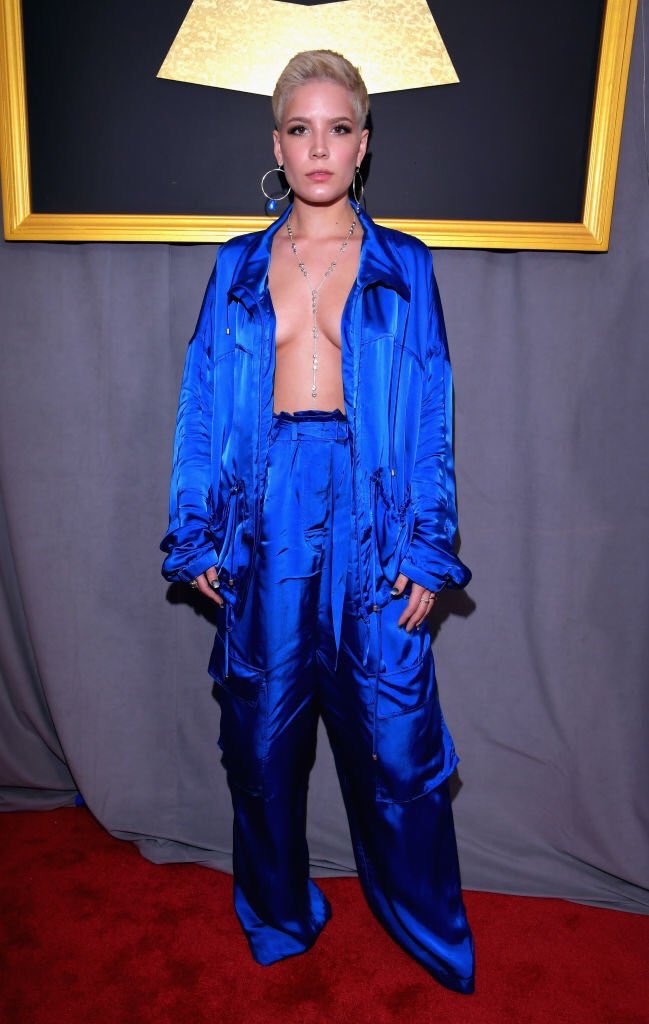 Halsey is so damn hot, I don’t even care who knows it. I have a big fat lesbian crush on Halsey. Well, I most so have a crush on her music. I am obsessed with her voice and her weird songs like “Strange Love”.

She joked around on the red carpet about how she didn’t want to wear a dress so she wore her gym clothes, she then went on to say that she wanted to look like TLC in the “Creep” video, which I can’t blame her. Other than all of that double sided tape it looks beyond comfortable.

I hope to one day be able to show up to a formal event wearing silk pajamas. That is really always the goal, right? 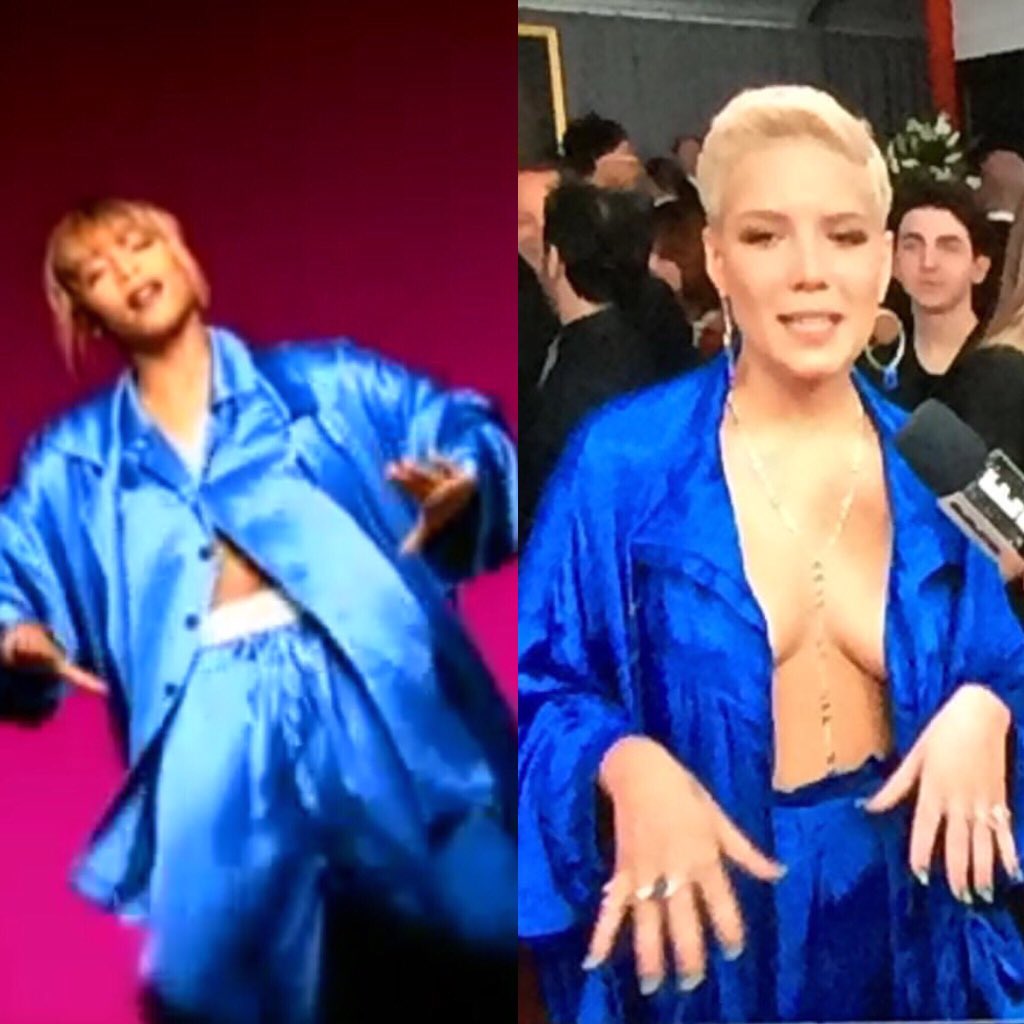 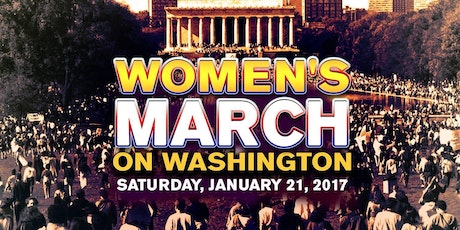 As most people know, women are marching across the country today for equal opportunities as men. I am not going to dive into it all, if you don’t agree with me that’s fine. I am not here to argue politics, I am here to help you with a list of songs that will pump you up as you march.

You can march for whatever reasons you want, but it is important that you speak up.

If you are there or just want some songs to empower you, here you go!

7. I Will Survive – Gloria Gayner

On Friday Keke Palmer stepped out wearing a seriously awesome outfit. Considering it was only like 5 degrees out and she still wanted to show off her TLC ‘No Scrubs’ inspired leather outfit, I respect it.

Know what I respect more though?

I respect the fact that she put photos of Leonardo DiCaprio on her pants. Of course they were probably there when she got it but that doesn’t matter. Having Leo’s face on any kind of clothing is a pretty serious statement.

For the record, all of these Leo faces are from his role as Romeo in the 90’s remake of ‘Romeo and Juliet’ . It was a super weird take on the story but I recommend it.

I have one word for Keke though, slay.

Look back at eet 👅

“Conventional Sex,” Experimenting with Sex Toys,” One-Night Stands,” “Open to Experimentation,” “Gentleness,” “Good With Your Hands,” Sensual Massage,” “Extended Foreplay/Teasing,” “Bubble Bath for 2,” “Likes to Give Oral Sex,” “Likes to Receive Oral Sex,” “Someone I Can Teach,” “Someone Who Can Teach Me,” “Kissing,” “Cuddling & Hugging,” “Sharing Fantasies,” “Sex Talk.”

And here are the turn-ons that he offered up in service of finding a compatible person other than his wife with which to engage in those acts:

The two accounts overlap by a period of a few months. When he launched the second account, Duggar paid an initial fee of $250 that appears to have gone toward the purchase of an “affair guarantee”:

Customers who buy 1,000 credits for $250 receive a money-back “affair guarantee,” if they don’t have an affair within three months.

From the raw data of Josh’s first account (Josh_the_man):

The second account, which was registered in July of 2014, was paid on a monthly basis until May of 2015. We’ve reached out to TLC, the Family Research Council, and a spokesman for the Duggar family for comment and will update if we hear back. (Read it all here at: http://gawker.com/family-values-activist-josh-duggar-had-a-paid-ashley-ma-1725132091?utm_campaign=socialflow_gawker_facebook&utm_source=gawker_facebook&utm_medium=socialflow)

Alright so now it’s my turn to talk after reading all of this stuff from Gawker. I have kept my mouth shut about Josh Duggar and his scandal because I found it disturbing and sad. I think that the Duggar family is a horrible family. Not only did they hide the fact that their older son actually molested their own daughters, they also made their daughters go on camera and talk about it. Talk about how God helped them forgive their brother, and how they had to sleep with locks on their door. What the fuck is wrong with that picture?

Now here comes the real fall from grace, Josh Duggar was revealed to be apart of the Ashley Madison hack, good. Now this is all allegedly involved stuff, let me just throw that word out there so I don’t get into trouble.

Now let’s just think about this. This is a good God loving family who thinks that being gay is wrong, front hugs before marriage is disgusting, and feel the need to cover every single inch of their body while at the beach. Hiding the fact their son molested their daughters though, that’s totally fine. Their son going on a website to find sex outside of his marriage, I wonder how they are going to spin this? Is his wife Anna going to say that she knew about that too and they prayed and forgave each other.

Listen I am sure that a lot of men used this service, they paid for sex outside of marriage, and that’s not okay, I am very aware of that. I wonder if many of them publicly preached about abstinence before marriage and how homosexuals should be condemned.

Honestly screw this cult family. I know they had a strong following but I hope that this is another dent in their already fucked up legacy.

My favorite cult like family is getting another member!

No surprise here right? I mean the Duggard’s don’t believe in contraception and Ben is a complete babe. Good for you Jessa! You nailed a good looking guy right there. I mean when you don’t have your first kiss until your wedding day, I feel like there are a lot of hormones that just all come at once, no one knows how to deal with them! Well clearly you go at it like rabbits and get pregnant like five months after marriage.

Let’s just take a seat though, Ben is only 19, holy shit. Ben is still a kid himself! Good for him for marrying an older woman though since Jessa is 22, an old maid if you ask me!

They will probably have 10 kids, then adopt a few more like they want to.

Nothing but well wishes for the family! Maybe one day the Duggards will rule the world.

Now listen, I really love TLC, I mean that too. I know all the words to ‘No Scrubs’ rap included, ‘Waterfalls’, rap included, can’t go wrong with ‘Creep’ either. Alright so I really love their popular music but I am willing to listen to all of their other music without complaining as well.

The other day I saw an article that Katy Perry had donated 5,000 to this Kickstart campaign for their new album and I had some different thoughts about the idea of a Kickstar campaign. So this band with the remaining members were one of the biggest girl groups on the planet, right? Why do they need a Kickstart campaign? Do they not have the money anymore? Can they not get signed to a major label anymore? It just confused me greatly. I am happy that they are coming back and everything, don’t get me wrong!

I do hope that they come out with some real amazing material, modern hip hop is missing these guys. Of course not having Left Eye is a kick in the face but hey, her spirit lives on! Maybe they have some unreleased material. Imagine if they did that? Just dropping singles that still have Left Eye in them because they didn’t release all of her material. That would be INCREDIBLE!

If you would like to donate here is the link! https://www.kickstarter.com/projects/1507621537/tlc-is-back-to-make-our-final-album-with-you/description

I don’t want to go to this concert, I need to go to this concert! I haven’t been this excited for a concert since NKOTB teamed up with BSB! To this day I will say that was one of the best concerts of all time. This line up though? It may be better than that one. I believe I have made it pretty clear that Nelly is my all time favorite rapper. He could rap the phone book and I would probably still dance to it. Having TLC there, that just takes the cake. How in the hell did this even happen? Which one of the New Kid members came up with this bright idea? Possibly their greatest idea ever, right?

Anyway, tickets go on sale at the end of January and I do believe that this concert will break records. These are three bands that everyone loves. Everyone loves TLC, the fact that they decided not to replace Left Eye only makes me love them more. T-Boz is my girl for life though.  Can’t go wrong with Nelly, ever. Nelly is the sexiest and best rapper ever, the end. New Kids are basically the original Backstreet Boys, so I love them.

All I need in my life is to hear ‘Waterfalls’ and ‘Ride Wit Me’ live at the same concert to know that my life is complete.

Most people don’t understand my true obsession with the show ’19 Kids and Counting’ and when they find out most people just don’t get it. Now let me tell you why I am so crazy interested in this family. Well number one they are all home schooled and I want to know how that works and they also don’t use the internet much, still very interesting. The most interesting part of their family is the dating that they all have to go through. So far two of them have been married, and Jessa is next on the list. Anyway, the two before her, they never kissed their fiance until their wedding day. Before they got married they could only have chaperoned dates and could only side hug or hold hands. I don’t understand! Shouldn’t you at least kiss? I love how strange it is for me but to them the fact I kiss strangers at bars is probably extremely taboo!

Jessa is my girl and honestly I think that she will break these rules, she seems like that kind of girl. She is sweet as shit but Ben is really hot, how can you not want to give him a forward facing hug? I want to know for real though, first kiss at the wedding? You going to do that Jessa?! Let me know as soon as possible so I can write about that too!

Anyway, big congrats to Jessa Duggard, my personal favorite of the clan, you got yourself a hot husband. Ben Seewald, you are sexy congrats on that.

May you two have an incredible journey together and many attractive children!

Most people are aware of Left Eye’s actions that landed her in trouble, like accidentally lighting her ex-boyfriends house on fire among other things. In 2002 she decided to get clean and take a spiritual journey where she ended up losing her life in a car accident. It is crazy to think that was 12 years ago.

Today Lisa “Left Eye” Lopes would have been 43 and even though she is gone her spirit lives on.

Happy birthday you will never be forgotten for helping change music history forever!