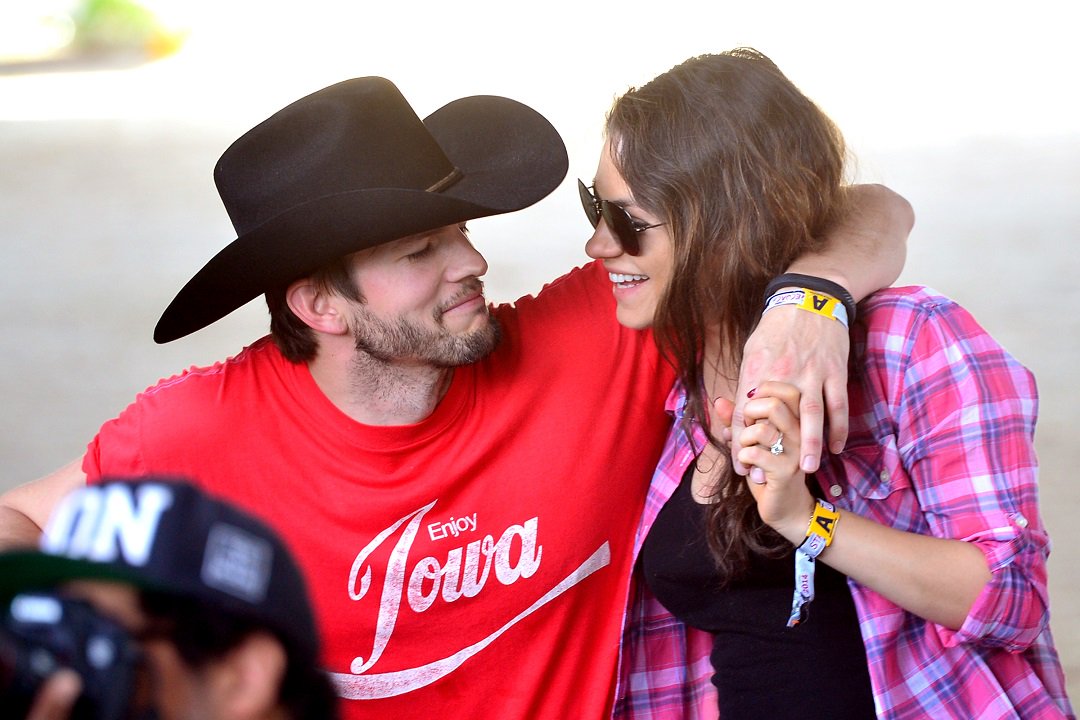 If Ashton Kutcher and Mila Kunis ever break up I need someone to put me on watch because this couple is definitely in my top five favorite celebrity couples. They were love interested on That 70’s Show and then Mila admitted to disliking Ashton for a while, then they fell in love for real. How adorable is that? Extremely, it’s extremely adorable.

The couple already have a daughter together, Wyatt who is now two years old now and if reports are correct they just welcomed a baby boy to the family!

The couple have yet to release a name but reports are that both mom and baby are doing just fine!

Considering how private this couple is we probably won’t know the name for a little while and will never see a photo of the baby, but that’s fine!

According to E! news the most perfect couple in the world just got a little more perfect. It looks like Jackie and Kelso are going to have a little bundle of joy in a few months. Truthfully I don’t know how legit this is because their reps haven’t said anything just yet but it seems real, right? For months people have been saying that Mila was pregnant and that they wanted to start a family so it would make sense, right?

This is just the perfect little love story. Ashton was actually Mila’s first kiss ever, which could make anyone swoon, right? Little love story that has been in the making for over a decade now.

Can we imagine how Demi Moore is reacting to this news? She is probably sitting by the pool pouring herself another mimosa as she gets injected with more botox and watches her pool boy clean while he is only wearing a speedo.

Congrats to the happy couple! You two will have an incredible little baby that will be beautiful.

Demi Lovato has been grabbing headlines quite a bit lately for a few reasons. She confirmed that after two seasons of sitting on the judging panel for The X Factor USA she won’t be returning for another go round, if the show returns in spite of its lackluster ratings. She has also decided that it’s time to open up about the drug use that landed her in rehab three years ago. We now know that at her worst Demi couldn’t last more than 30 minutes without needing to feed her cocaine addiction. She has admitted to doing lines while flying first class after everyone around her had fallen asleep.

Demi has often talked about how she has purposely decided to speak up about her struggles to help inspire other young girls to get help, maybe like Selena Gomez? Along the way it seems like Demi has been inspired by Wilmer Valderrama, which is kind of ironic since he used to be considered one of Hollywood’s biggest bad boys that really likes to party. I kind of have to wonder if hanging with him helped to fuel Demi’s bad habits. The two had dated before Demi went to rehab and in the last 6 months or so it seems that they have rekindled things. The two have been spotted together often – everywhere from a lowkey Starbucks run to a Kanye West concert and Wilmer has tweeted his love and support for Demi on more than one occasion.

It looks like things could be getting more serious because on Nov. 20th Wilmer was spotted at Tiffany & Co buying what very well may have been an engagement ring with the inscription, “With you and by you always”, which seems to have special meaning for the couple. Do you think that an engagement is in the works here? Demi has done a lot of living in just 21 years. Do you think that she’s ready to get married to Wilmer at this point? Do you think that he has cleaned up his act too?

So, there are certain couples in Hollywood that I will not stand for. The first one being Rihanna and Chris Brown, the second one is Demi Lovato and Fez. I think that Fez is a little creepy Venezuelan man who just wants to be famous but can’t seem to get famous. I mean he is 33 and hanging out with Joe Jonas constantly so that is terrifying to begin with. Most people think it is because Demi lOvato is on my list of people I would be lesbian for in a heartbeat, which is true, she is. Wilmer Valderrama is just a fucking creepy dude. I mean he was like 21 when he dated a 16 year old Mandy Moore, then he was 26 when he dated an 18 year old Lindsay Lohan. Are we following people?

There was a time though when Wilmer was spotted making out with Minka Kelly, and I thought that maybe he was out of the kiddie pool. Then Demi took him right the fuck back. Mistakes were made, big mistakes.

Another reason why this couple drives me fucking insane is because they refuse to admit they are a couple. Nothing frustrates me more than that. If you are going to date, at least fucking own that shit. Don’t sit there like, uhmm I don’t know, maybe we are. I understand celebrities want to keep their personal lives personal but if they would just admit to dating then maybe people wouldn’t care so much about their relationship.

How bad would it suck though if this were true. Fez was trying to be all coy and secretive about it then it gets blasted all over the internet.Maybe if you didn’t hide your relationship no one would care, boom!

Word on the street is that Jackie is knocked up with Kelso’s baby! Can you believe it?! I don’t believe it, not yet at least. People think that people Mila wants to wear comfortable clothes that she automatically knocked up. Home girl just wants to be comfortable! Now I would like to hope it is real since Ashton was actually Mila’s first kiss ever, aw right? Well they are supposedly getting married in a month and now they have a kid on the way. I wonder if they will have another Kabbalah wedding since that went so well for Ashton the first time.

Today is the day that Demi and Ashton’s divorce is officially over so of course there needs to be baby rumors right? I mean why wouldn’t there be.

Anyway if these two are having a baby congrats! If Mila is just wearing comfortable clothes for once, then good for her!