All I can say is that it is about damn time that Tyler got the love the he deserves. I have had a massive crush on him since he played Martin on ‘7th Heaven’ and my crush has never stopped. Those piercing blue eyes and dark features? How can you not just stop, stare, and appreciate the man.

He was kind of out of the spotlight for a bit, played college baseball. until he was able to get a role in the ‘Teen Wolf’ remake on MTV. He played a badass lone wolf or something. I only watched the first season but he was shirtless a lot and I couldn’t complain about that.

If you weren’t aware he was just announced as the newest Superman too, something that obviously means you’re hot. There has never been an ugly Superman, think about it. Only good looking men with dark hair and light eyes are allowed to play Clark Kent. In my opinion Tom Welling may have been the hottest of them all but hey, we aren’t talking about Tom Welling, so I need to focus a little bit better. He has also recently been cast in the new Fifth Shades movie, so he will be on big screens everywhere soon enough.

Happy Monday and to Tyler, I am glad you are finally getting the love you deserve!

Actor Colton Haynes came out in an interview with Entertainment Weekly about his sexuality and how he wasn’t exactly ready to come out about until now. There have been a lot of rumors about his sexuality but the actor never confirmed or denied those rumors.

Here was what he had to say.

“I should have made a comment or a statement, but I just wasn’t ready. I didn’t feel like I owed anyone anything, but I felt like I was letting people down by not coming forward with the rest of what I should have said.People want you to be that GQ image that you put out, but people don’t realize what it’s like to act 24 hours a day. I’d go home and I was still acting,” Colton said. “People who are so judgmental about those who are gay or different don’t realize that acting 24 hours a day is the most exhausting thing in the world.”

All I can say is good for Colton for feeling comfortable enough to come out and I highly doubt it will effect any casting because let’s be real, he is an absolute babe. Him playing male or females love interest will be believable. 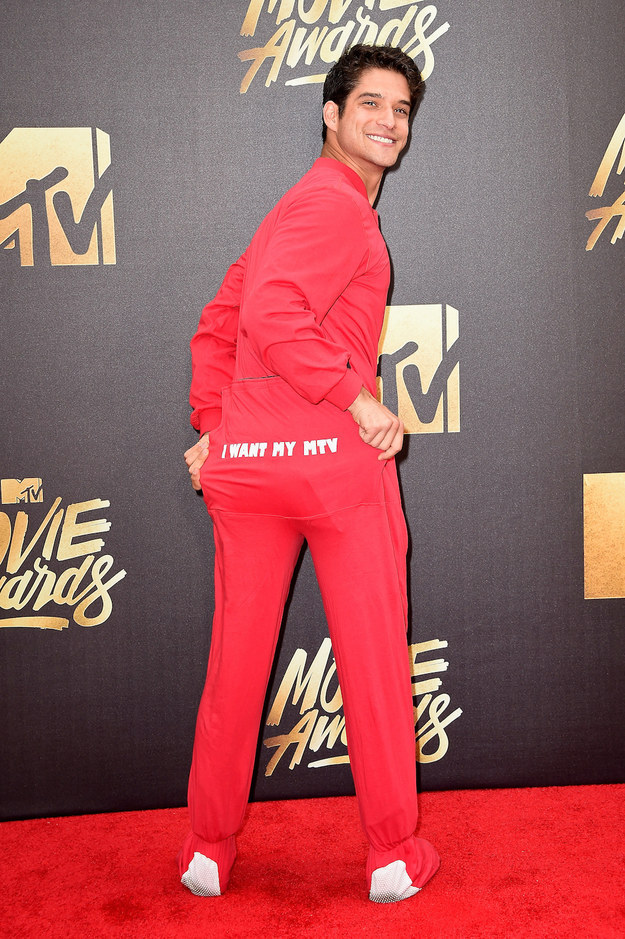 Tyler Posey looking cute as ever on the MTV Movie Awards red carpet. I mean how fucking adorable is he?

Really though, Tyler is so hot. Even wearing a onesie he is so hot. That jawline, that smile, that booty, can’t go wrong!

Dylan O’Brien — the star of the ‘Maze Runner’ movies — was severely injured in an accident on the set of the new movie … and has suffered multiple broken bones …. TMZ has learned.

Sources on the set tell us the 24-year-old — who plays Thomas in the hugely successful franchise — was filming a scene for “Maze Runner: The Death Cure” involving a car … when something went wrong and he was run over.

We’re told O’Brien was rushed to a hospital in British Columbia with “severe injuries” — where he is currently undergoing treatment.

A spokesperson for 20th Century Fox tells us production will shut down while Dylan recovers.(credit)

Obviously nothing but love for Dylan O’Brien over here! Wishing him a full recovery during this scary time!

Check back here for more updates!

Tyler Posey and his fiancee Seana Gorlick have ended their engagement.

Tyler added that he was doing “okay” but when asked if they were still friends, he replied “I don’t know.”

Tyler and his fiancee announced their engagement over a year ago and the two had been together for quite some time.

I feel like this shouldn’t really be a surprise to anyone, they were high school sweethearts, he got famous, then they broke up. I think that if you look through records it is usually that people don’t marry their high school sweetheart. The odds are even more against you when you are an actor, right? Usually you get married like four times when you are famous and it is absolutely fine!

Everyone is saying how sad it is but guess what, I am sure that the two of them will do just fine on their own. No need to worry since Tyler is freaking gorgeous and his fiancee well she is young. It isn’t the end for either of them.

What do you think happened though? Tyler probably hooked up with someone, right? Like there is a kind of high percentage of that, right?

The Teen Choice Awards were last night and Tyler Posey was one of the two hosts, the other was Sarah Hyland. Anyway, Tyler Posey absolutely killed it as a host because one thing, he didn’t take it seriously. He didn’t think that the show was anything too serious simply because it isn’t a serious thing.

Most of you know Tyler Posey from Teen Wolf and really that is all that I know him from too. Is he the best actor in the world? No, he isn’t. He seems like a really good time though! He liked to party and hang out, he also doesn’t hang out around the whole Hollywood lifestyle too much.

Tyler is absolutely adorable and I love looking at him, can’t help it. How can you not love that little off center jaw that he has? So adorable.

Keep on being hot Mr.Posey, if you got it flaunt it!

So let me give you some stats about Dylan O’Brien, well on stat really, he is on the MTV hit show Teen Wolf. I personally have seen maybe three episodes but he is the standout star of the show. He is pretty much the only one who isn’t a werewolf but he is fucking hilarious. He does weird body movements and like throws himself all around, he is funny.

Dylan O’Brien is going to be one of the celebrities to watch within say the next 3-5 years, he will become something big. He is adorable to look at. He is funny, his timing is just perfect and he seems really down to earth. He just isn’t about that Hollywood life, he has said that before. He also started this whole thing off by making weird videos in his bedroom.

He is Tumblr’s sweetheart which is a pretty big deal because people on that site either really love a celebrity or really hate a celebrity!

Anyway, Dylan is my man crush monday and for good reason. He is adorable, he is 22, and he is almost 6 feet tall.