So for a long time I have been very on the fence about my feelings towards Jake Gyllenhaal. I always kind of thought he was hot sometimes, then other times he wasn’t hot. Young Jake Gyllenhaal didn’t do anything for me, in fact he didn’t really do anything for my until “Love and Other Drugs”. Sometimes he is hot, sometimes he just isn’t. Well I have decided that he is hot, the end.

Over the past weekend I saw the movie “Southpaw” and was in complete awe over the transformation that Jake had put himself through. Half of the movie I couldn’t even believe that it was him. From his body, to the way his character spoke, it was just absolutely incredible. Jake is easily one of the best and probably most underrated actors of our time. If he isn’t nominated for “Southpaw” I don’t even know what is wrong with the world.

So Let’s be real. Jake has dated some of the hottest blondes in Hollywood, Reese Witherspoon, Kirsten Dunst, Taylor Swift. I think it is time for him to date a brunette blogger, just give it a try you might like it.

With those giant blue eyes that he has finally grown into, the permanent scruff, and the fact he is an incredible actor. He has a lot going for him and I think that his best work is still yet to come.

The other night both Eminem and Jake Gyllenhaal showed up at a movie theater in good old Detroit to surprise fans at an early screening of the movie ‘Southpaw’. For those of you who don’t know Jake is the lead actor and Eminem actually produced the whole soundtrack of the movie, so clearly the movie is close to both the rapper and the singer. This also happened in Detroit because I am convinced that Eminem refuses to ever go to any event that doesn’t happen in Detroit, his home city.

Can I just say how jealous I am of these movie goers? Whenever I go to the movies I get to listen to people talk through the whole thing, usually see some cell phone lights that distract me as I sip on my soda that I snuck into the theater. These people get a visit from one of the greatest rappers of all time and one of the better actors of our generation. 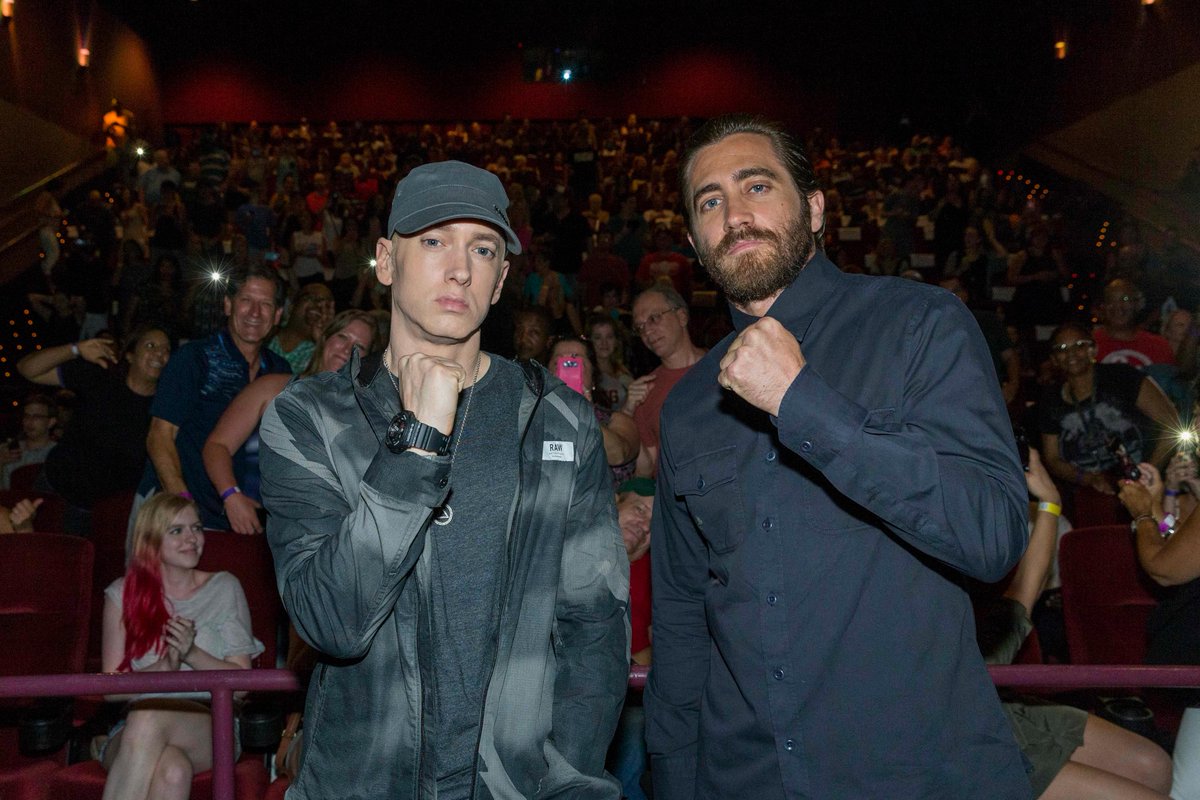 Eminem looks so unhappy and sad, it is always weird seeing superstars from your childhood age and actually look old. It’s okay Eminem, you can smile and let the world know you are happy!

In case you haven’t seen the trailer here it is, it truly looks like an incredible movie and will be out in theaters on Friday July 24th!