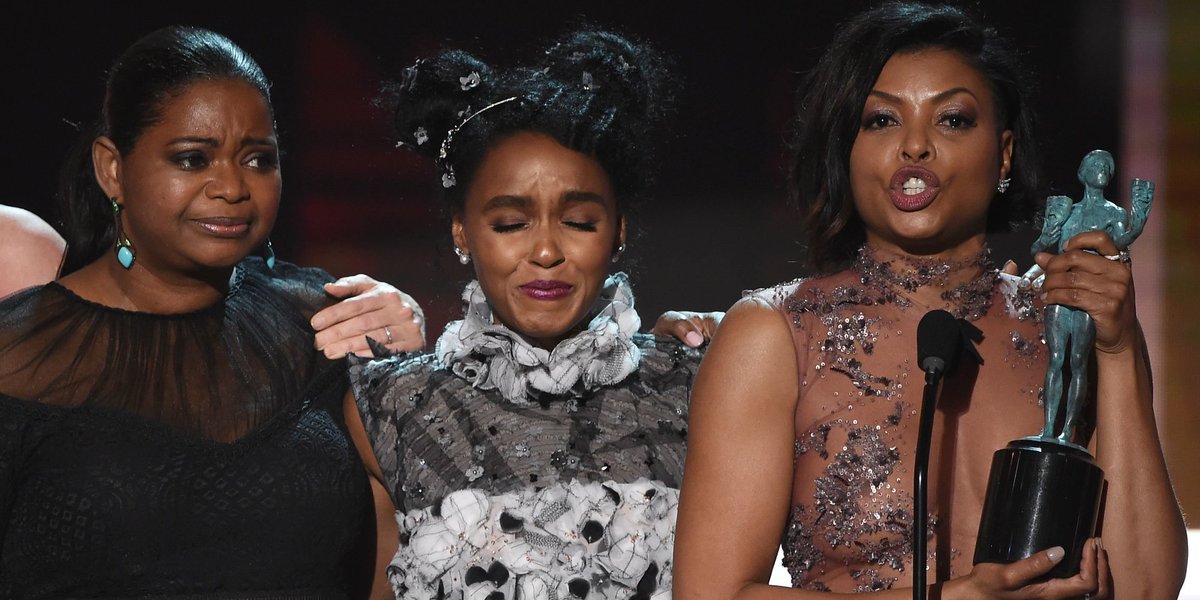 Last night the movie ‘Hidden Figures’ stunned everyone by winning the best cast ensemble statue. Most people were thinking it would go to ‘La La Land’ but it looks like the Screen Actors Guild decided that this movie was more deserving!

This movie is clearly about women who were not given credit for all that they did to help send a man to the moon. I do love that she said the movie is about unity though, that’s an important message that shouldn’t be lost.

“They didn’t complain, they focused on solutions.”

Taraji P. Henson , you’re incredible. This speech was beautiful and it was so important, we needed it right now.

“We stand here as proud actors." – @TherealTaraji on behalf of the cast of @HiddenFigures pic.twitter.com/7oL24Vpo5V

Spoiler alert if you haven’t seen ‘Stranger Things’ yet.

First of all, start watching it, you’ll finish it within two days I promise you.

Well tonight Natalie, Joe, and Charlie all put their fictional differences aside and walked the red carpet together for the SAG Awards.

Word on the street is that Natalia and Charlie are actually dating in real life. Shout out to Joe for trying to throw off that fact though! I commend your attempt!

Natalia you look beautiful and both Joe and Charlie look dapper as hell. The ‘Stranger Things’ money has been good to all of them.

Well hot damn Jonah Hill, you have glowed up since the last time that we saw you.

Let me be clear, I have had a crush on Jonah Hill for a very long time now. I think he is low key one of the best actors of this generation and I think that he is very good looking. I know that he gains weight then loses weight, I know that but I am into it. I mean look at how he is looks on the red carpet. There are no complaints from right here.

Whatever the case is I am very into this scruffy sleek look that Jonah has going on.

I think that we can all agree whenever Sophia Bush steps onto a red carpet she is absolutely flawless, tonight is no different.

Sophia Bush attended the SAG Awards as a presenter but she definitely won tonight in the best dressed department. She looked absolutely beautiful with her make up along with her pink dress.

The 34 year old ‘Chicago PD’ actress went with a bold eye shadow and made it work. She explained that she wanted to experiment a bit with her make up along with her look in general.

The experiment paid off.

She stepped on to the red carpet and absolutely owned it.

Sophia Bush and Common woke up to announce the nominations early this morning. The show airs January 29, 2017 on both TNT and TBS.

Check out all of the nominations!

At the Golden Globes we were kind of robbed with the Leo and Kate moments that happened during commercial break. The SAG Awards made up for it though. The two of them took pictures of the red carpet, they sat together, and when Leo won his first SAG award ever, him and Kate shared a big hug. #Relationshipgoals, I mean #friendshipgoals. I mean we can always hope maybe one day they will be together, that would be something,  wouldn’t it?

Congrats to Leo on his big win and congrats to Kate for being nominated! May your friendship last a lifetime.

Let’s check out their cute moment’s from last night’s show!

Oh the SAG Awards, the awards show that people seem to kind of forget about. The SAG Awards are fun though, I like them, the actors all seem to be a bit more relaxed than at the Oscars.

This week most of the award shows will announce the nominees and it we will see all of the snubs and surprises. Unlike my Grammy  post I will not predict any winners. Personally I haven’t seen most of the movies that are nominated and let’s be real, Modern Family will probably win again. I get that the show is awesome but damn, give someone else a chance! Also the award shows are starting to only really nominate streaming shows, I get it, they are edgy and awesome but cable had some great shows as well.

Here are the nominees though! I am hoping Johnny Depp wins, I know Leo deserves an award, but Johnny as Whitey was absolutely haunting.

I am also hoping that this is Amy Poehler’s year, she really deserves a win. She is a comedic genius!

The 22nd SAG Awards will be presented on Jan. 30 on TBS and TNT

Outstanding Performance by a Female Actor in a Drama Series
Claire Danes, Homeland
Viola Davis, How to Get Away with Murder
Julianna Margulies, The Good Wife
Maggie Smith, Downton Abbey
Robin Wright, House of Cards

Keep up with all the awards season information here!