Okay, okay. So far I am a fan of the lineup that NBC is putting together so bring this show back. Of course I am a bit weary of it considering how iconic ‘Cruel Intentions’ was but hey, they are bringing back Sandy Cohen! Any time Sandy Cohen is in anything, it is usually good. I mean those eyebrows are full of talent!

For real though, I was like 12 and had a crush on Sandy Cohen that I never understood. Being well, older now, I still have a crush on him and understand it a little bit better. Those brows of fury, those blue eyes, I mean how can you not love it?

So far all that we know is that Peter will be playing the father of Sebastian. He is a crude businessman but other than that, we don’t know much.

So far we know that at least one original character will be reprising their role, God bless Sarah Michelle Gellar for that one! Some people are angry that Reese has yet to join. I mean I would love to see her come back but let’s be real, I feel like chances on that are slim to none. Of course we wont get Ryan because he died in the movie, spoiler alert if you haven’t seen it.

That’s what we know so far! Will you be watching? 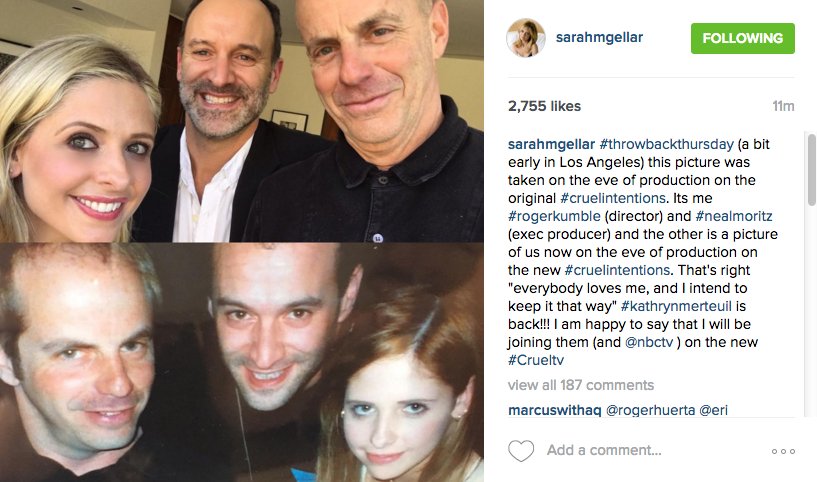 Thank baby Jesus! Listen, I know Dean royally screwed with Rory and was a jealous asshole but I loved him. Mostly because Jared Padalecki is an absolute babe. I mean he has grown into such a good looking guy, even when he was younger on the show though, he was still a hottie.

Personally I am excited that all three of Rory’s main men, Dean, Jess, and Logan will be coming back. This reboot should be incredible!

It has officially been confirmed that Milo Ventimiglia will be coming back as the bad boy with the heat of gold Jess! Milo was in 37 episodes of the original series and made his final exit in season 6 of the show. There is no information how long he will be sticking around on set or anything but, he is back and that is all that matters!

So far we have Rory’s exes Logan and Jess coming back, which is sure to cause some issues in Stars Hollow. We don’t know anything about this new installment of the show though. We know that Netflix has greenlit four episodes, 90 minutes each, but that is about all that we have at the moment.

Let us pray that this ‘Gilmore Girls‘ reboot is incredible. I also hope that Dean comes back to town. Although he was kind of a dick I loved him and Rory together.

As I said before if Zac Efron is shirtless there is a really good chance that I am going to write about it just so we can admire his perfect body. Can you blame me? There is currently a blizzard outside but these shirtless pictures of Zac sure no how to warm me up. Too much? Yeah that was too much.

Why is he taking these lessons? Apparently it is so he can train for the ‘Baywatch’ reboot that he and Dwayne Johnson are starring in! A movie that can not come soon enough if you ask me!

I hope there are more shirtless swimming lesson pictures to follow, let’s cross our fingers!