Demi Lovato has been very outspoken about her mental health and sobriety since 2011 after her three month stint in rehab.

In case you don’t remember. The singer went to rehab after getting into a fist fight with a back up dancer on the show she was co-headlining with the Jonas Brothers.

From there on, Demi has been able to open up with everyone about her struggles. She opened up saying that she wasn’t even able to go an hour without using coke at the height of her addiction problems. Demi has also described walking through airports with water bottles full of vodka.

She has used her voice to shed light on addiction and mental health issues, even going to Capitol Hill.

For many years it has been reported that Ben Affleck has suffered from addiction issues. In 2001 he spend time at a rehab center in Malibu due to drinking and allegedly other drugs, but since then things had been quiet. He opened up about living his life sober and being a father to his children, things like that.

According to reports Ben’s drinking had started back up again this past year and it put even more of a strain between Ben and Jennifer Garner’s relationship. They have since announced that they are going to try again with their marriage, but it did a number on them.

Yesterday Ben wrote a post on his official Facebook page announcing that he completed another rehab stay where he went just after the Oscars to focus on his health and addiction issues.

I know that there are people out there who are rolling their eyes at this post. Simply because Ben is a celebrity and all of that stuff. Everyone hates celebrities right now in case you forgot.

Personally, I think that this is a big step. Talking about addiction is never easy, admitting you are powerless over something is probably one of the hardest things in the world. He didn’t have to share his story but he did and maybe just by this one post, someone can feel as though they aren’t alone in their addiction and get help.

Good for you Ben for coming out and talking about this. I hope that you continue to find happiness that isn’t at the bottom of a bottle.

If you think that Candice Swanepoel is going to let you call her out about breastfeeding in public, you’re very wrong.

Today the Victoria’s Secret model posted a very powerful message on Instagram about the double standards of breastfeeding in public, and topless modeling photos. She has a point too.

Candice clearly knows what it is like to be a model and how it is okay to be topless, but God forbid you feed your child in public, it is frowned upon.

I won’t continue to ramble on though, check out the powerful post yourself!

Many women today are shamed for breastfeeding in public, or even kicked out of public places for feeding their children. I have been made to feel the need to cover up and somewhat shy to feed my baby in public places but strangely feel nothing for the topless editorials I've done in the name of art..? The world has been desensitized to the sexualization of the breast and to violence on tv…why should it be different when it comes to breastfeeding? -Breastfeeding is not sexual it's natural- Those who feel it is wrong to feed your child in public need to get educated on the benefits breastfeeding has on mother and child and intern on society as a whole. 💪🏼💙 👫👭 #mothernature

My favorite part of the whole post, “breastfeeding is now sexual, it’s natural”, so true.

Whenever I hear about celebrities speaking out on political issues I almost want to roll my eyes, well I guess I should say when they speak about who they are voting for. I personally don’t think it’s fair that their opinions could influence others without any prior knowledge. A lot of people will basically do whatever their favorite celebrity says, so when I saw Lauren spoke out, I was a little nervous to read it.

Personally though I am glad that I did in fact read it. Lauren’s post is so beautifully written and you can tell that she is passionate about the issues that are currently happening in Mississippi and North Carolina, where bills are being passed to treat the LGBTQ community in an unfair manner. 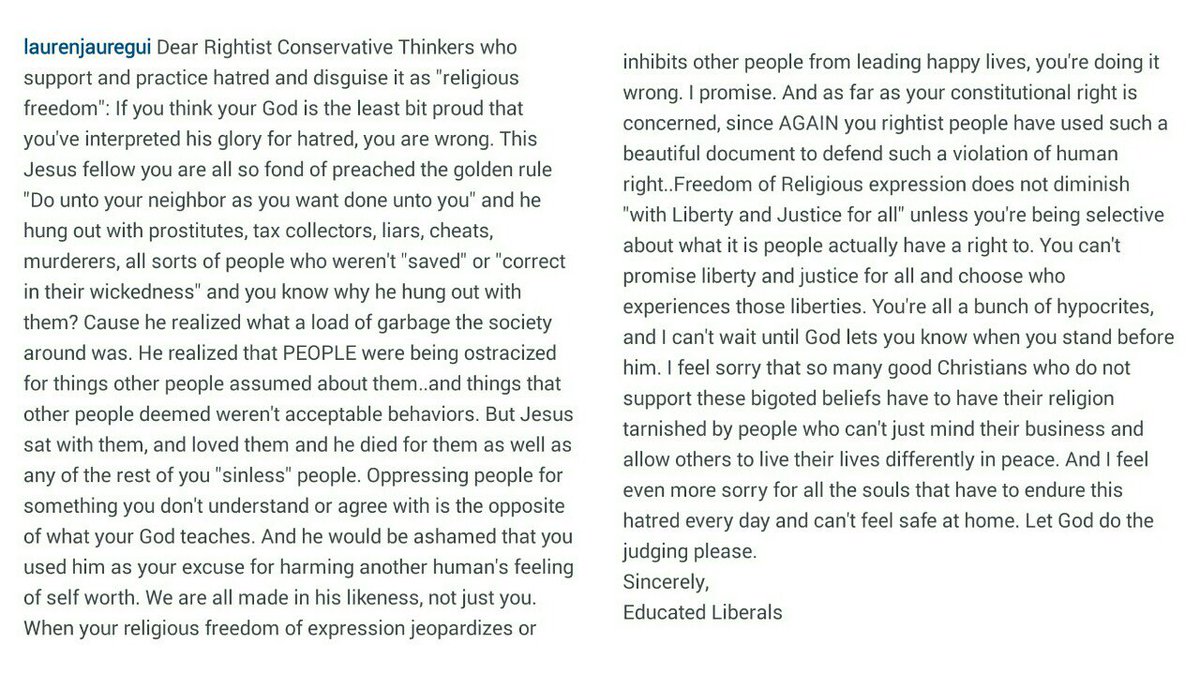 Thank you Lauren for speaking out and being educated enough on the manner were you are not attacking anyone, just making great points.

Also, thank you for being a great role model to all of those young women and men that follow you!

I never thought anyone would ever love me because I felt like my body was ruined by my abuser. But he loves the survivor in me. He’s stood by me all night proud and unashamedly. THATS a real man. ❤  (Credit)

I genuinely wish that Lady Gaga won last night, not to take credit away from Sam Smith but her song was absolutely incredible. ‘Till It Happens to You’ is so insanely relevant to the world today and Gaga’s performance was so heartfelt, it could bring anyone to tears. I was sobbing like a baby actually. Any song that can bring out such emotion from important is a special song.

It is beautiful that she gives credit to her soon to be husband Taylor too, who has stuck by her side for years now. They have a beautiful relationship and are very open about their love for one another.

May this couple last forever and again, thank you for such an incredible performance Gaga.

Looking back on the highlights of my life, there’s a moment I’ll never forget from a day in London about two years ago. I was in town to play the O2 and I was out shopping on my day off. My friend Ed Sheeran met up with me in this little shop where I was buying ballet shoes. He walks in and says “you have to hear this new song. I think it’s the best one I’ve ever written.” And then, as usual, he pulls out his phone and gives me headphones. I sat there on a bench in that store and heard ‘Thinking Out Loud’ for the first time, as little kids were picking out tutus and leotards next to us. Little did we know it would go on to be first dance song at countless weddings all over the world, become Ed’s biggest hit, and eventually go on to win him Song of the Year at the 2016 Grammys. Ed and I had been on tour together all year on the Red Tour and we saw each other almost every day. I lived for the moments he would burst into my dressing room with a new song to play me. It happened so often that it became normal, and I don’t think he ever knew how much it meant to me that he wanted me to hear his songs first. I don’t think he ever knew how inspired I was by his drive and passion to constantly create new art. But it’s his 25th birthday today, so I’m saying it now. You deserve everything you have, and everything you will continue to achieve, Ed.

And an extra congratulations to the incredible Amy Wadge on your two Grammys.

I love this friendship. Ed and Taylor forever. That is really all I have to say about that. Two legends.