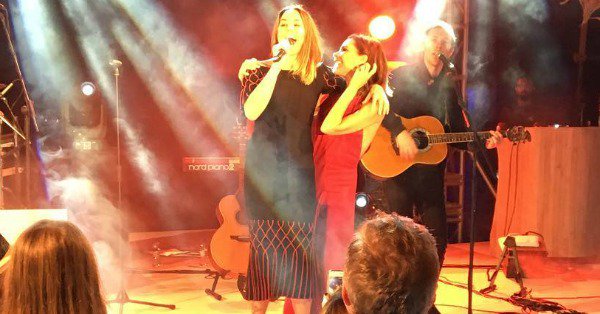 Any time there is any small reunion of the Spice Girls my heart gets a bit happier. The former members rang in New Year’s together and did a small performance for the crowd. Although Posh, I mean Victoria has admitted that she rarely even sang, she did when she was up there with Sporty, I mean Mel C.

Mel was performing a New Year’s Eve show in the Maldives and called Victoria out on stage before they started to sing “2 Become 1”, one of the dirtiest songs I sang at age 7.

Of course the crowd went kind of insane when the duet happened and I don’t blame them. Luckily for us a few people captured the impromptu performance.

A mini #SpiceGirls reunion on New Year's Eve in the Maldives where Melanie C and Victoria Beckham are singing #2Become1 together!!

Wow 17 years ago to this day this happened. I was lucky to meet someone who has the same drive and wanted the same things in life. We have created 4 beautiful children and I couldn’t wish for a more loving and caring mummy for them. Happy anniversary, I love you ❤️ (credit)

In my opinion, Victoria and David don’t get nearly enough credit for their relationship. They have been dating since the 90’s and are still together. I mean in Hollywood years, this relationship has been together for an entire lifetime. That’s right, 17 years in Hollywood is a lifetime.

I am not sure about the press in England but I know in America, these two don’t get enough credit so I am going to give them a lot of credit!

They are a couple who has been able to get through the ever changing social media with very little chaos. There was once a rumor that David was cheating with their nanny, but other than that? Nothing. No rumors, nothing. Just the two of them being beautiful and in love.

Congrats on 17 years and I hope you two stay together for many, many more to come!

Yes! It is a great day whenever the Spice Girls are mentioned. Apparently four songs from their Forever album have been released, and I am beyond excited about it. Before people get mad at me saying that there was a fifth girl, you are right, but not for this album. She wanted no part of Spice Girls and Geri made her bed, so she had to lay in it. She wasn’t a part of their final album. All of the songs are pretty incredible, they should have just made one final CD with those songs. I know that Victoria Beckham kind of ruined it for everyone, saying there was no chance of another reunion. But does it even really matter? Posh didn’t even sing!

I really feel like the 90’s are coming back and I am really excited. I mean Missy Elliot was just on the top ten for Itunes, gas is pretty cheap, and now there are new Spice Girls songs coming out of nowhere, yeah I am onto you music industry. Let’s get rid of Ariana Grande, bring back Mariah, that would be my next step. Keep Justin Bieber on the back burner and bring back Aaron Carter. TRL should be a thing again. Those are just a few of my demands.

If you are a younger person reading this let me put the Spice Girls importance into perspective. They were only together from 1994 until 2000, so six years. In that time they have sold more than 100 million albums to date worldwide. They only had 3 albums but created 18 music videos from them. Honestly they weren’t together that long, they only had three albums, and almost 15 years after they broke up they are still being talked about. Yes, I know they did a reunion tour but I am not counting that.

Here are videos of the songs so I hope that you all love them as much as I do. Let’s be real their best song will always be “Saturday Night Divas”.