The new season of ‘Orange Is The New Black’ comes out on June 9th, and I personally can’t wait to binge watch the whole damn season in that weekend.

Last night, Netflix dropped the newest trailer for the show and it looks so good. A lot of people haven’t been big fans of the last two seasons but I have a feeling this season will make up for it.

We have never seen all of the girls work together for a common good, until now it seems.

Hopefully this season we get some answers about bitch boy Bennett.

As always I am just here for Flocka and Maritza. 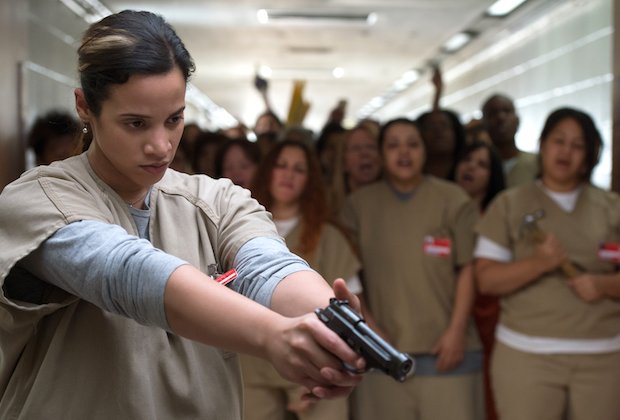 Let me just start by saying I am in absolute awe of all of the runners that were able to finish the Boston Marathon, hell even the runners that weren’t able to finish. I think it shows true athleticism and it is something that I don’t know if I could ever do. After the bombings shook the city of Boston, the city remained strong. They were able to come together and form a bond that was kind of unspeakable. The city came to run again the next year, and now in 2015 with the bomber locked away, they were able to run again. They were able to honor those who were hurt, honor those of lost their lives, honor a city that will never have its spirit broken. I know that I could write about all of the runners, but this is a celebrity blog, that is why Uzo is the focus of this post. I just want to say that we are #BostonStrong and I am beyond proud to be able to say I am from Massachusetts.

“It feels like the right thing to do,” Aduba told PEOPLE of her decision to run this year, just two years after the Boston Marathon bombings. “It still feel pretty raw, and with [the trial] it almost feels like a Band-Aid getting pulled back again. That’s where I grew up, where I learned what a marathon even was … to be a part of it, it feels particularly special.”

Good for you Uzo, I think it is awesome you were able to run and also raise over 10,000 towards studying potential cancer causes. You go girl!

So for the past three days instead of going out and enjoying the first nice weekend of the year, I have been binge watching the new season of Orange Is The New Black. Like any good American would do, right? Well this little cutie plays the cute cop who is about as intimidating as a kitten. Matt McGorry plays the good guy who just so happened to get a prisoner pregnant. In the second season he becomes a little bit more bad ass but I wont get into it for people who didn’t binge watch the show like I did.

I mean he is a man in uniform, how can you resist? He is also a man in a fake uniform so he really can’t get you arrested or anything so that is ever better, right?

I mean I love his little chestnut eyes and pouty lips! Can’t go wrong there!

Happy Monday! May this man crush make your day suck a little less!