I am seriously so sick of couples announcing breakups on social media. There is nothing more annoying in my opinion. You aren’t married, you’re simply breaking up. No more engagement, move on.

That’s what Nick gets for being a cheater though, right? Iggy can’t trust him, so she kicked him to the curb. Let me clear that any 30 year old man who continues to be called “Swaggy P” can not be taken seriously.

Good for you Iggy, I am glad that you realized cheaters rarely change their spots.

Here is their announcement 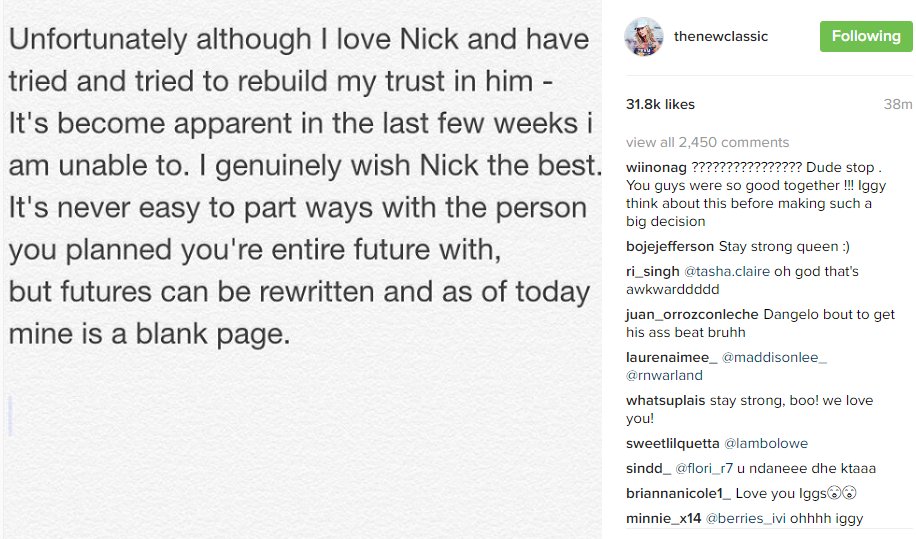 Well, it looks like D’Angelo Russell broke “bro code” and now every player on the Lakers hate him. Why you ask? A recent video came out that D’Angelo recorded as a supposed prank, where Nick Young admits to bringing a girl home from the club.

Apparently D’Angelo did this as a prank because Nick had no idea he was being filmed, but I don’t see how this is a prank? I mean is it funny to film someone admitting to cheating on their fiancee and then post it on SnapChat? I really have no idea.

NBA star Nick Young Caught on Video Admitting To Cheating On Iggy With A 19-Year-Old Girl After The Club! pic.twitter.com/9ny9tDG0Mb

You can hear Nick stating that he is 30 and the girl brought home was 19.

According to reports there has been a serious rift because of this, “bro code” and locker room talk aren’t meant to be broken!

After reading some of these comments on different articles it is pretty disgusting. People say that all basketball players are cheaters and Iggy is stupid for being with one at all. I mean, maybe she fell in love guys, I am sure she wasn’t aware that her soon to be husband was bringing home girls from the club. That’s just what I think though.

hmmm i see D Angelo Russell is trending… I actually liked his film. Thanks bro.

No word on whether that was sarcasm or what, no word on whether or not the engagement is over. All that has been confirmed is that no one cares about Iggy and how she is probably heartbroken, everyone is just mad that D’Angelo broke the “bro code”.

Also, Amber Rose shout out at the end, apparently Nick never tried because she knows Iggy.