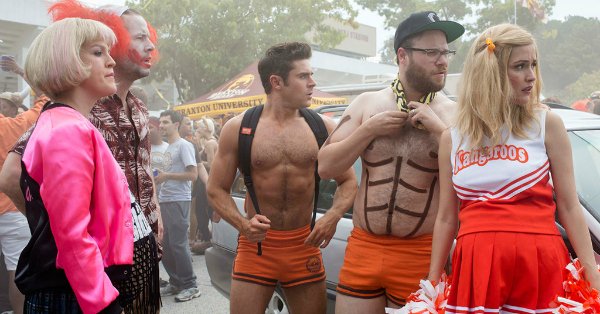 I am so ready for ‘Neighbors 2′ to come out, I don’t care what anyone says because Neighbors was one of the funniest movies of 2014. I feel like it was very underrated because like I said, it was absolutely hilarious.

Most of the original cast is back for it, no word on McLovin’, but Rogen, Efron, Bryne, and Franco will be back. So that is a good crew. The newest additions will be Chloe Grace Moretz and Selena Gomez, again two solid people to add to the cast.

This time around it is apparently about sorority girls, rather than frat boys. In all reality it will probably be a lot like the first one but who cares! I just hope they don’t kill it, because that would bum me out.

Everyone needs a little bit of Zac Efron in their lives to brighten up their Sunday, right? Thank you to Justjared.com for posting these incredibly sexy picture of Efron that were taken while he was out filming ‘Neighbors 2’, a movie that I hope is hilarious.

Now I don’t have much more to say than that. Let’s just take a moment to appreciate these photos.

Also I just want to add that Zac has an eight pack. Not a six pack, a fucking eight pack.