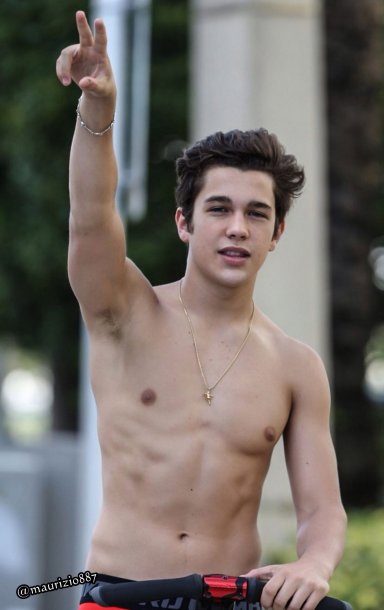 May I just say that Austin Mahone looks adorable in this video, just sliding all over the place being a little dancer. Do I like the song? Nope! I think that this is one of the worst songs I have ever heard, really and truly ever heard. I don’t even understand how that is an appropriate name for any kind of song,.

I must say that this music video kind of reminded me of good ol ‘Bye Bye Bye’ with NSYNC, just because the floor was sliding around and stuff. They could have done a lot more with this video though. I do believe that one. I give it a solid C.

P.S.- Will Austin Mahone ever come out with a cd? Just curious.

So I guess that I am like 3 days behind with this release but I had a Grammy’s hangover so I was trying to get over that. Anyway, Austin Mahone is just going to keep banging out hits and not have a CD, that is what is going to happen. He isn’t even going to release a damn CD and jsut keep blowing up the charts with bangers like this song.

Let’s be honest is this the best song in the world? No! Pitbull is in it! Whatever he touches I pretty much run the opposite way but Austin did a great job saving it, he knows what he is doing and I like it. I can’t wait for the music video honestly.

Pitbull needs to go away though. He talks about the band KrissKross who people who like Austin Mahone are too young to even know who they are. At lease stay relevant with your references please you old man. You also shouldn’t be checking out people that Mr.Mahone is because obviously they will be far too young for you! Ya lil creep!

Well now that Bieber is out for good Austin Mahone has stepped up big time, and he knows it. Tonight this is how he rolled up to the Grammy’s look at him. Look at that big grin, look at how happy he is because he knows, he is aware that he just won the rivalry between him and Bieber. Honestly, I don’t know if there was a rivalry but it is over now!

Look at him with his little pushed back hair, no more shaggy hair for him! He is almost 18, he is a grown ass man! Well almost….In a few months he will be 18, so that is a good thing! I wont feel as creepy whenever I write about him. I now understand the count down when the Olsen twins were turning 18.

He is my absolute favorite cougar bait and guess what, I don’t feel ashamed! He just released that song with Pitbull and now here he is smiling on the Grammy’s red carpet.

If you follow my blog you know how much I love little Austin Mahone, my favorite little cougar bait that I just love. I think that his music and fun and that he is adorable, two things which just capture my heart. Pitbull on the other hand, he is terrifying, absolutely scary to look at without his glasses and he looks like he could be old enough to be Austin Mahone’s father. I guess he knows that he needs young talent in order to promote songs since he cannot sell a single on his own if his life depended on it. Just sayin!

There is one thing that bothers me about this song already. I mean look at the title…Remember when songs actually had titles that meant something? Austin first you had ‘Banga Banga’ and I don’t even know what the means. Now you have a song with a noise and a response to basically any answer? Yeah, You need to go back to your ‘What About Love’ days and bring back the happy pop boy I grew to love!

Anyway this song will probably be amazing and I will jam to it daily. Can you believe this little Austin Mahone doesn’t even have an album out yet and he is doing big things? Crazy town right there.