A Make-A-Wish cancer patient named Meghan had one wish, to meet Drake. Little did she know that she would be meeting Drake and Rihanna!

Most people are aware that Drake went on stage with Rihanna in Miami, which is where Meghan is located, so it all worked out for the fighter!

The two artists reportedly took a lot of time with Meghan and were nothing but kind to her, making sure that her dream came true!

The meeting was well documented on social media, check out the pictures below!

ps: word on the street is that Drake and Rihanna are back together, I can only hope that is true. 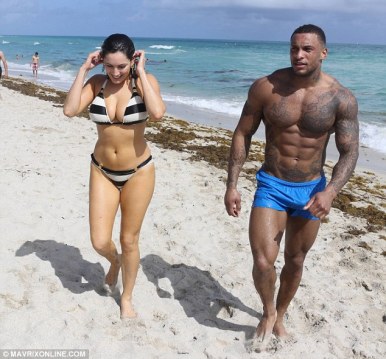 So I was scrolling through the internet and found this couple, who are they? They are like perfect, right? I mean the girl looks healthy as shit, she isn’t one of those skinny actresses and she can fill out a bikini, and the guy, well just look at him. Apparently they are English celebrities, of course, they have beautiful celebrities! I mean just look at Liam Payne, Prince Harry, David Beckham, the list goes on and on!

After doing some research I guess that Kelly Brooks is a model over there, that was pretty much all I could find out. By find out I mean that is all I scanned over because I don’t really care. Other than modeling she is on Britain’s got Talent and she is an actress. She is beautiful that is all that matters. Homegirl is also 34, look at how incredible she is!

Then there is her gorgeous boyfriend David McIntosh who has an awesome last name. Now apparently he is a model, actor, and used to be in the British army if I remember correctly. Look at him though, I would just like to sit back and watch him for a while. In fact I am probably going to Youtube one of his shoots or something.

Congratulations England for having some of the hottest celebrities in the world. I will keep my eyes on you Daniel, don’t you worry.

Justin Bieber was arrested for DUI early Thursday morning and it wasn’t pretty — cops say Justin was wasted and resisted arrest and cussed the cop out, dropping multiple F  bombs … TMZ has learned.

Law enforcement tells us … Bieber was busted in Miami Beach and it didn’t end with DUI … he was also busted for resisting arrest without violence, drag racing and driving on an expired license.

Law enforcement sources tell TMZ … they believe Justin was under the influence of both drugs and alcohol.

According to the police report — obtained by TMZ — cops approached Bieber’s car and they instantly realized he reeked of alcohol and had bloodshot eyes.  He had a “stupor” look on his face.

The police report says … Bieber was defiant from the get-go, yelling at the cops, “Why the f**k are you doing this?”  He also yelled, “What the f**k did I do.  Why did you stop me?”

When the officer tried to perform a routine pat down, Bieber said, “I ain’t got no f**king weapons, why do you have to search me?  What the f**k is this about?”  Bieber claimed he wasn’t drunk and coming back from recording music.  That’s not true, because we knew he was at a club.

Now the basis for the resisting arrest charge — Before the pat down, as Bieber got out of the car, he “kept going into his pants pocket.”  The cop ordered him to put his hands on the vehicle, and Bieber initially complied but soon took his hands off the car, turned and then cussed out the cop. The cop then grabbed Justin by the right arm, Justin pulled his arm away, and said, “What the f**k are you doing?”

Read more: http://www.tmz.com#ixzz2rEkn7ieQ
Is anyone really surprised that Justin Bieber got arrested? I mean it was only a matter of time until he got himself into some serious trouble right? This isn’t just like throwing an egg at a house Bieber, you put your life and the lives of others in some serious danger.
According to TMZ Bieber was pulled over around 4 in the morning and that was when the chaos really started. He got pulled over for going double the speed limit which was 55-60 MPH in a 30 zone. When all this occurred he started to be a disrespectful little shit and then the cops realized he was allegedly drunk and all that other bullshit. From there he was arrested and is now being tested for his BAC.
Let’s just get real for a quick second. Here is a young star, who got too much fame too quick, drinking, driving, and being extremely disrespectful to officer yet he gets arrested. Then you see a celebrity like Paul Walker, who was speeding but had no alcohol in his body at the time, he crashes and dies. Paul Walker who did so much for charity and never took fame for granite, doesn’t seem too fair does it?
Also I can’t wait for Bieber’s team to come out and say he is just a kid, kids make mistakes and all of that fun stuff. Then there will be the Beliebers who are angry at everyone for being mad at Bieber for being an asshole. Finally we will see if Selena Gomez even reacts to this, it makes me wonder since they were apparently getting back together. It really isn’t a good look if you are hanging out with a guy who is clearly doing extremely stupid things.
Bieber is on the path to be the male Lindsay Lohan and I am no psychic but in the future I see many more arrests happening in this young stars future.

Most people have no idea who Kellan Lutz with but he is one of the best kept secrets in the world. Seriously, Kellan Lutz is fucking gorgeous and I am proud of my girl Miley if this is true. So he showed up at the Jingle Ball concert in NYC and now he was just spotted coming off of Miley’s private jet from Miami. Now at first I thought that it was just random but I would like to think differently. My first point is, do you really think that Miley would let some random onto her plane? No, I don’t think so.

I read somewhere that a website said that today would be random, which isn’t true at all. Let’s see she just broke up with Liam, a tall hot blonde dude. Guess what Kellan is? A tall, hot and buff blonde guy. I mean come on, that is basically a match made in heaven. He is fucking gorgeous. She is gorgeous.

In my opinion I think Miley should settle down with him because why the fuck not? It would stop rumors about her and Juicy J and shit like that. Anyway, brava Miley, Kellan is easily one of the hottest guys in Hollywood that isn’t recognized enough.