Let’s be real, Sarah Jessica Parker and Matthew Broderick are absolutely Hollywood couple goals. Most couples in Hollywood don’t even make it to the five year mark, so being able to get to 20?

The couple got married all the way back in 1997 and have two children together.

Shout out to SJP for rocking a black dress at her wedding, what a bad ass move. 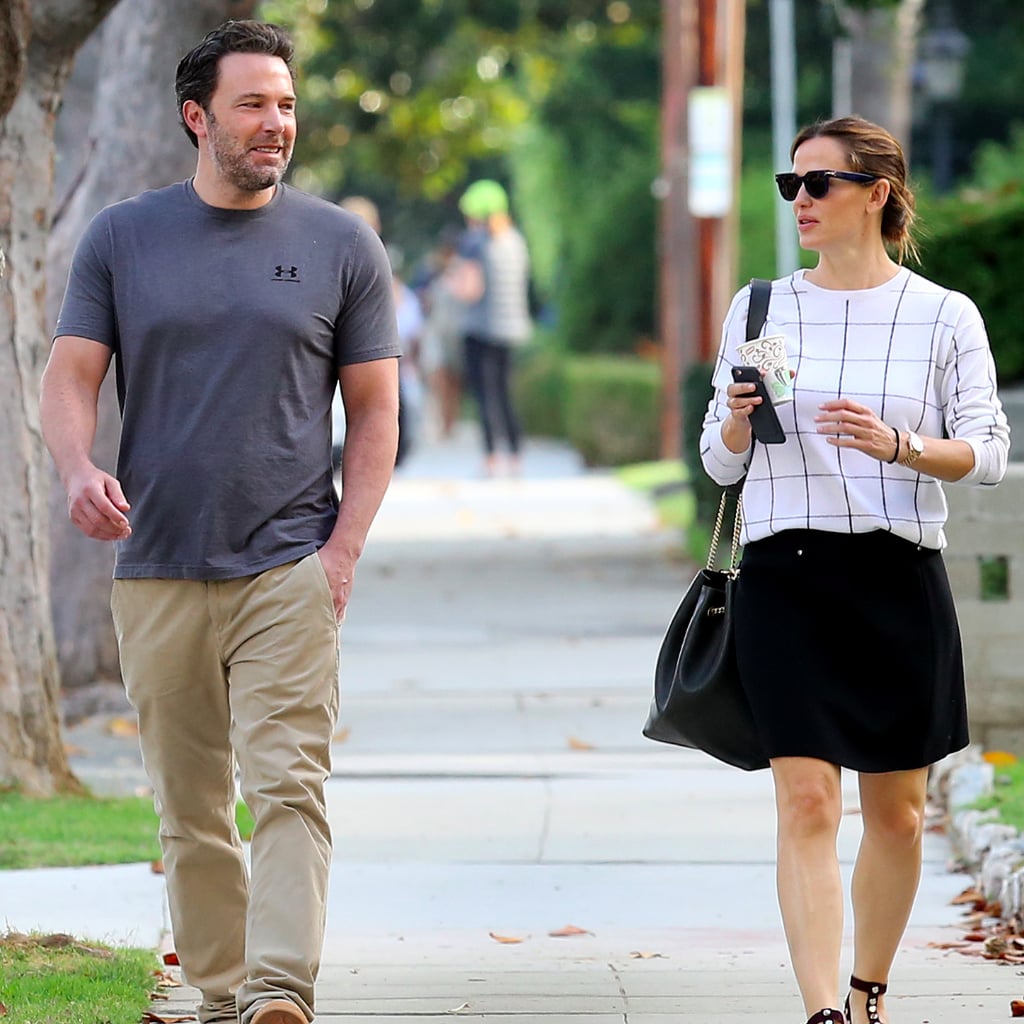 Love is real! Ben Affleck and Jennifer Garner have reportedly called off their divorce! Reports are circling the internet that Jennifer has decided to give their marriage another go.

Back when the couple announced their divorce there were plenty of rumors swirling about why they were ending their ten year marriage. Rumors of Ben drinking too much, sleeping with the nanny, and everything else under the sun.

The couple decided to keep quiet though, never really talking about the divorce or anything of that nature. I am pretty sure that Ben didn’t even move out of their home. Jen would even travel with Ben along with their three children whenever he was filming a movie.

I genuinely don’t think that this was just a publicity stunt but if it was, they definitely pulled it off.

Here’s to hoping they don’t break up again!

Whether you love or hate this couple, you know about them. The two of them were able to become the villains of ‘The Hills’ and then the country kind of wanted to ban them for a little while.

Most people know at this point that ‘The Hills‘ was pretty scripted but who would have thought that the realest thing about the show was the relationship of Heidi and Spencer. The couple started dating on season 2 of the show, then well, the rest is history.

The two of them eloped in Mexico I believe, then had many staged paparazzi photoshoots after that.

Never forget Speidi and I would like to genuinely give them my congratulations. They were able to make it through the reality television world and continue to be a functioning and happy couple.

May you two have many more incredible years of marriage.

Vergara, 43, and Manganiello, 38, wed Sunday at The Breakers Resort in Palm Beach, Florida. A “charming” little boy dressed in all white served as their ring-bearer- along with three flower girls in sparkling white dresses, a source tells PEOPLE. The romantic ceremony eschewed tradition for more personal touches: The Modern Family star walked down the aisle (on the arm of her 23-year-old son Manolo Gonzalez-Ripoll Vergara) to an instrumental version of Amanda McBroom’s “The Rose”, and the bride and groom said “I will” instead of exchanging “I dos.” credit

Well how sweet is this? These two absolutely gorgeous people finding love and getting married. This wedding was lavish and lasted for like four days because why not?! Sofia has a ton of money in the bank because of ‘Modern Family’ and her other advertisements and Joe? Well Joe was in both Magic Mike movies and in True Blood. So he probably isn’t too worried either, well not being married to this babe he absolutely isn’t.

When these two first got together I was sure that they were all for publicity. I was positive because of how they were so upfront about their love, never tried to hide it. It had to be fake, but I was wrong. Sometimes it happens, not often but sometimes.

Check out the pictures below and follow all of my posts here!

Khloe and Lamar have jointly gone to court to dismiss their divorce case, because they want to stay husband and wife … TMZ has learned.

Khloe’s lawyer Laura Wasser went before a judge Wednesday morning, asking a judge to withdraw the papers they both signed to end their marriage. The file was sitting in a pile waiting to be processed and signed by a judge.

The judge granted Wasser’s request and the file is now dead.

Khloe filed for divorce in December 2013, but sat on it for a year and a half because she tried to save her marriage by trying to get Lamar into rehab. She finally gave up this summer.

As we reported, Khloe privately vowed to be by Lamar’s side during his recovery, which will take months, and a few days ago they both agreed to give their marriage another chance. They both signed the document Wasser presented to the judge, asking that the divorce case be dismissed.(credit)

Now listen, if you follow my blog at all you know that I don’t like the Kardashians that much. I will say one thing, I have always like Khloe. I always thought that she was the one who actually had fun and didn’t take herself as a serious reality star, much like Kim. Honestly I don’t like Kim, Kris, or Kylie, the other girls and the slightly forgotten brother are fine by me.

A lot of people said that the Kardashians were simply by Lamar’s side because it was going to make for good television but I genuinely believe that Khloe was there because she loves Lamar. That was the one Kardashian show I watched. Now I don’t remember the name but that was it, all the others, well not so much of a fan.

Anyway, I am extremely happy that these two are going to give their marriage another shot. I am also hoping that they won’t put so much of his recovery on television. As much as I like Khloe I still believe that this family does almost everything for publicity and would do anything to make a dollar. Kris would sell her soul for $10, that’s my personal opinion.

All I can say is good luck to this couple and I hope Lamar has a quick recovery.

Apparently Usher has been in a relationship for a while now, and apparently I had no idea! Damn Usher is good with his private life. I mean I remember his first marriage was a complete shit show so I hope that this one goes much better for him!

Usher is one of my favorite singers of all time. Now just his voice but his presence, everything about his exudes confidence and he is just so damn sexy. Well apparently he is married now too so I apologize to Grace Miguel for talking about your husband like that, but I’m not really that sorry.

Sources say that these two were supposed to get married in front of a group of 100 people but decided last minute to go and elope instead. These photos are from Grace’s Instagram and you can see Usher sporting a gold wedding band.

According to reports these two have been linked together since 2009 and got engaged last December. I am sure I wrote about it, talked about it, and thought about it but clearly I just erased my mind of that fact. Usher is my boo, he will always be my boo, but I accept that he is happy.

Congrats to the couple and may this marriage be a lot better than Usher’s last!

It’s about damn time these two beautiful people got married! So far what we know is that it was a surprise wedding, most people thought that they were going for Justin’s 44th birthday party, just kidding wedding. Can you imagine if you weren’t dressed for the occasion? Casual birthday party? Let me just wear a pair of shorts and a shirt, nope it’s a wedding. According to a few outlets they had been planning this for a while, they just wanted to wait for the right time.

Jen you got yourself a keeper right there if I do say so myself. I mean clearly Jennifer Aniston is one of the most beautiful women ever but Justin, well he is one attractive guy. He is also really funny which is always good to know.

Alright, back to wedding details. So far the guests that have been released are Lisa Kudrow, Courtney Cox, Chelsea Handler, Howard Stern, Ellen Degenerous, Sia, Emily Blunt, and John Karsinski. I am sure that there were more people than that but how perfect that Pheobe and Monice were there for Rachel’s wedding?

I do think it is time to accept the fact that Jennifer Aniston is happy. For so long people have said that she missed Brad, or that she still hates Brad. If she does that is understandable, but she is happy now. She is happily married to a new man and it is time to celebrate that.

I hope that this couple doesn’t break my heart that Gwen and Gavin did, or like Ben and Jennifer did, or like Blake and Miranda. It’s been a real tough summer on celebrity couples, kudos for not backing out guys.

You know I an genuinely surprised that these two made it all the way to the alter simply because I didn’t expect them to last. I truly thought that they would end up breaking up after a year or so, but I don’t think they have even made it to that year mark. They got married in St. Charles, Illinois and the reception was full of their closest friends and family. One guest that wasn’t there was Mark Wahlberg, Donnie’s younger brother. There are rumors swirling that Mark’s wife is not a fan of Jenny. What drama!

I give this couple another year at most then they were will separate quietly and go on many different talk shows to talk about their heartbreak. You just wait and see, that will all happen!