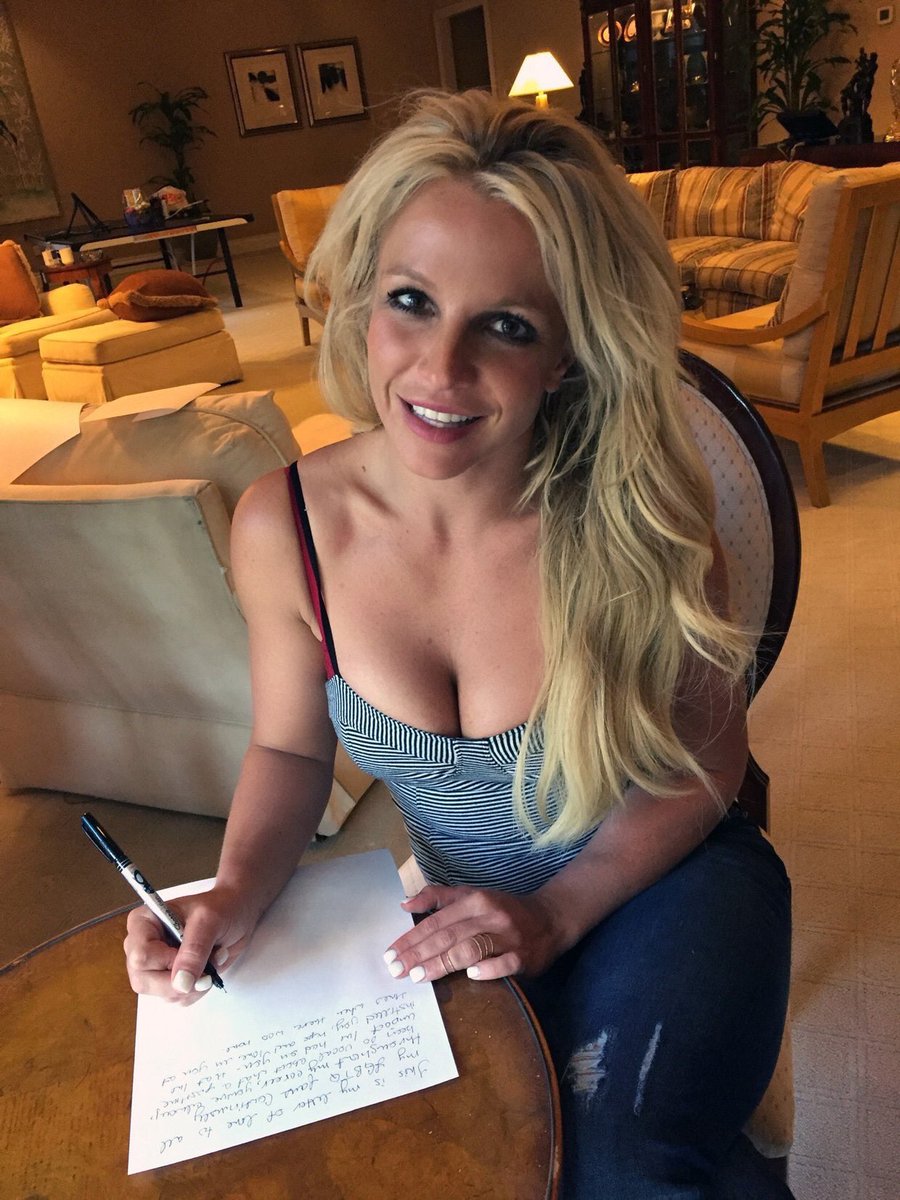 Today Billboard started it’s 30 Days Of Pride and I have to say, it’s a pretty incredible campaign that they are putting together. So far a ton of celebrities have written love letters, or thank you letters, whatever you want to call them, to their LGTBQ fans.

Of course Britney has a very large LGBTQ fanbase and she absolutely recognizes that she does.

“This is my letter of love to all my LGBTQ fans. Continuously throughout my career, you’ve always been so vocal about what a positive impact I’ve had on you — that I’ve instilled joy, hope and love in you at times when there was none. That my music is an inspiration. That my story gives you hope.

But I have a secret to share with you. You see, it’s actually you that lifts me up. The unwavering loyalty. the lack of judgment. The unapologetic truth. Acceptance! Your stories are what inspire me, bring me joy and make me and my sons strive to be better people.

Her unique handwriting is adorable, I have to say that.

Now I know that I said I wasn’t going to write about politics anymore and I am going to stick to that. This article isn’t about politics even though it has both the Bush and Obama family in the title.

Jenna and Barbara Bush decided to write an open letter to Sasha and Malia since they are now leaving the White House after eight years. Of course they will most likely stay in the public eye but Jenna and Barbara wanted to offer some advice to the Obama girls.

Okay, enough rambling from me, I cried while reading this, so be prepared.

“Malia and Sasha, eight years ago on a cold November day, we greeted you on the steps of the White House. We saw both the light and wariness in your eyes as you gazed at your new home. We left our jobs in Baltimore and New York early and traveled to Washington to show you around. To show you the Lincoln Bedroom, and the bedrooms that were once ours, to introduce you to all the people—the florists, the grounds-keepers and the butlers—who dedicate themselves to making this historic house a home, the four of us wandered the majestic halls of the house you had no choice but to move in to. When you slid down the banister of the solarium, just as we had done as 8-year-olds and again as 20-year-olds chasing our youth, your joy and laughter were contagious.

In eight years, you have done so much. Seen so much. You stood at the gates of the Robben Island cell where South Africa’s Nelson Mandela was imprisoned for decades, your arms around your father. You traveled to Liberia and Morocco with your mom to talk with girls about the importance of education—girls who saw themselves in you, saw themselves in your parents, saw who they could become if they continued to study and learn. You attended state dinners, hiked in national parks, met international leaders and managed to laugh at your dad’s jokes during the annual Thanksgiving turkey pardon, all while being kids, attending school and making friends. We have watched you grow from girls to impressive young women with grace and ease.

And through it all you had each other. Just like we did.

Now you are about to join another rarified club, one of former First Children—a position you didn’t seek and one with no guidelines. But you have so much to look forward to. You will be writing the story of your lives, beyond the shadow of your famous parents, yet you will always carry with you the experiences of the past eight years.

Never forget the wonderful people who work at the White House. Our greeter as 7-year-olds at our grandfather’s Inauguration was Nancy, the White House florist, who ushered us in from the cold. She helped us make colorful bouquets of winter flowers for our grandparents’ bedside. Twenty years later, Nancy did the flowers for Jenna’s wedding. Cherish your own Nancy. We stay in touch with our Secret Service. They were part of growing up for us: there for first dates, first days and even an engagement and a honeymoon. We know it wasn’t always easy—the two of you and the two of us were teenagers trailed by men in backpacks—but they put their lives on hold for us.

Enjoy college. As most of the world knows, we did. And you won’t have the weight of the world on your young shoulders anymore. Explore your passions. Learn who you are. Make mistakes—you are allowed to. Continue to surround yourself with loyal friends who know you, adore you and will fiercely protect you. Those who judge you don’t love you, and their voices shouldn’t hold weight. Rather, it’s your own hearts that matter.

Take all that you have seen, the people you have met, the lessons you have learned, and let that help guide you in making positive change. We have no doubt you will. Traveling with our parents taught us more than any class could. It opened our eyes to new people as well as new cultures and ideas. We met factory workers in Michigan, teachers in California, doctors healing people on the Burmese border, kids who lined the dusty streets of Kampala to see the American President, and kids with HIV waiting to get the antiretroviral drugs that would save their lives. One tiny girl wearing her finest lavender dress looked young, which she was not. She was little because she was sick. Her mom admitted that she might not live to see these drugs work, but her brothers and sisters would. After meeting this girl, Barbara went back to school and changed her major, and her life’s path.

You have lived through the unbelievable pressure of the White House. You have listened to harsh criticism of your parents by people who had never even met them. You stood by as your precious parents were reduced to headlines. Your parents, who put you first and who not only showed you but gave you the world. As always, they will be rooting for you as you begin your next chapter. And so will we.”

They penned the open essay for Time magazine.

This isn’t the first time that Sophia Bush has taken to social media to stand up for herself. A few years ago, she has a violent stalker on social media that she decided to write to. One thing about Sophia is that she does speak for what she believes in, something that I really commend her for.

This time Sophia decided to pen an open letter directed towards a fellow passenger who made not only her uncomfortable, but made the entire plane feel uncomfortable. She addressed it to “Random Dude on a plane”, and it is very powerful.

The letter goes on to say.

“When you make a woman so visibly uncomfortable, that after you’ve ignored all visual cues to please leave her alone (one word answers, she pulls out a book, puts on a hat, she actually asks you to not speak to her with the tone and words you’re choosing to use) that she finally GETS UP and MOVES SEATS, leave her alone,” she wrote. “Do not continue trying to make conversation. Stop turning around and looking at her, stop leaning out of your seat and towards her body when she has to grab something out of the overhead bin above her original seat, and sadly also above you, mid flight. And in my case, stop believing that you are entitled to make me uncomfortable because you ‘watch my TV show’ so I owe you some magical debt, I make it, you watch it. After that, the ‘exchange’ is done. You do not get to harass me, or any woman, because you think you pay our bills. You don’t bro, I DO.”

Glad you were able to stick up for yourself and it is a damn shame that Sophia has to deal with that.