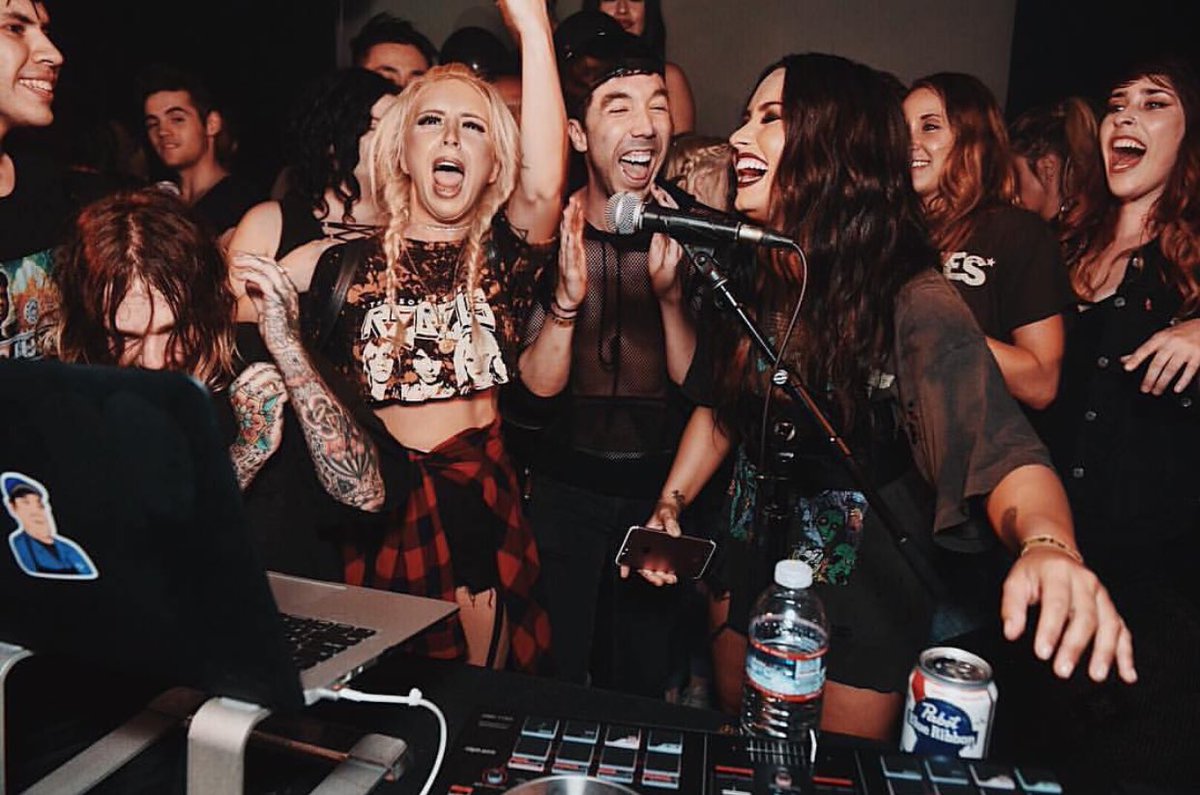 Last night Demi partied it up at Emo Night in L.A., judging by her snaps it seems like the greatest thing in the world.

It was all emo music like Fall Out Boy, All Time Low, Panic! At The Disco, those fun bands that we all love so much! Well they weren’t fun, they were all really upset and sounded whiny but we all loved to belt those songs out.

Demi decided to grab the mic and sing some Paramore though.

Really, there’s nothing I can say about how bad I didn’t know I needed to hear this.

Check it out below and tell me what you think!

There’s nothing quite like finding a new love to get over a broken heart.

Such seems to be the case with Selena Gomez and Orlando Bloom. The pair was spotted together Saturday outside of the Chelsea Handler show in Los Angeles, reports TMZ.

Once the “Hobbit” star saw paps he reportedly got up and left.

They arrived in the same car together and looked comfortable in each other’s company throughout the night, sources told HollywoodLife.com.

Damn Orlando Bloom, looking haggard as shit! I mean I know he was probably trying to run away from the paparazzi but still. He is looking wily as hell. Selena isn’t looking too good either, but is anyone surprised with that? She is heading down a rough path.

I remember I heard about rumors about this couple from a while ago but I just said no way. Now after this picture, maybe. This paparazzi is probably one of the luckiest paparazzi in the world. These two were just going to have a smoke during the Chelsea Handler show but the lucky paparazzi knew where to go!

Anyway, this is probably just some rebound bang type of thing, can you blame them? Back in 2012 there were rumors that Justin Bieber and Miranda Kerr had hooked up. Orlando is probably so happy that he is able to hang out with Selena, ultimate rebound sex. Am I right? No? I think so.

Eminem and Rihanna are teaming up for a “Monster Tour” this summer.

The music super stars have announced a three-city tour together.

The concerts are planned for New York, Los Angeles and Detroit.

“There are some shows coming up with Rihanna,” Eminem told XXL in the magazine’s latest issue. “It’s a three-city tour: New York, L.A. and Detroit coming in August. The Monster Tour.
Read more: http://www.jamn945.com/articles/trending-on-jamn-469048/eminem-and-rihanna-team-up-for-12094485/#ixzz2uFfODFRq

I need tickets to this show, and I needed tickets yesterday. Do I like newer Eminem music? Absolutely not, but he will sing his older classics and that is enough for me! I need to be at one of these shows. Probably the New York one because I will not be going to Detroit. Also Rihanna will be there? I am madly in love with Rihanna.

These two should just create a whole album together like Jay-Z and Kanye did a few years back. It is obvious that these two have incredible chemistry and can make amazing music. It would be one of the best selling albums of all time, I will tell you that much! You can shake your head but you know you’d be listening ot that shit on Spotify on a private session because you don’t want people to know your love for Rihanna. It is okay, I know what is going on in your head.

It is just obvious that Rihanna + Eminem = straight fire music.

These shows will probably be sold out in 2.5 seconds so I wont even be able to get into the show. That is what YouTube is for though, right?