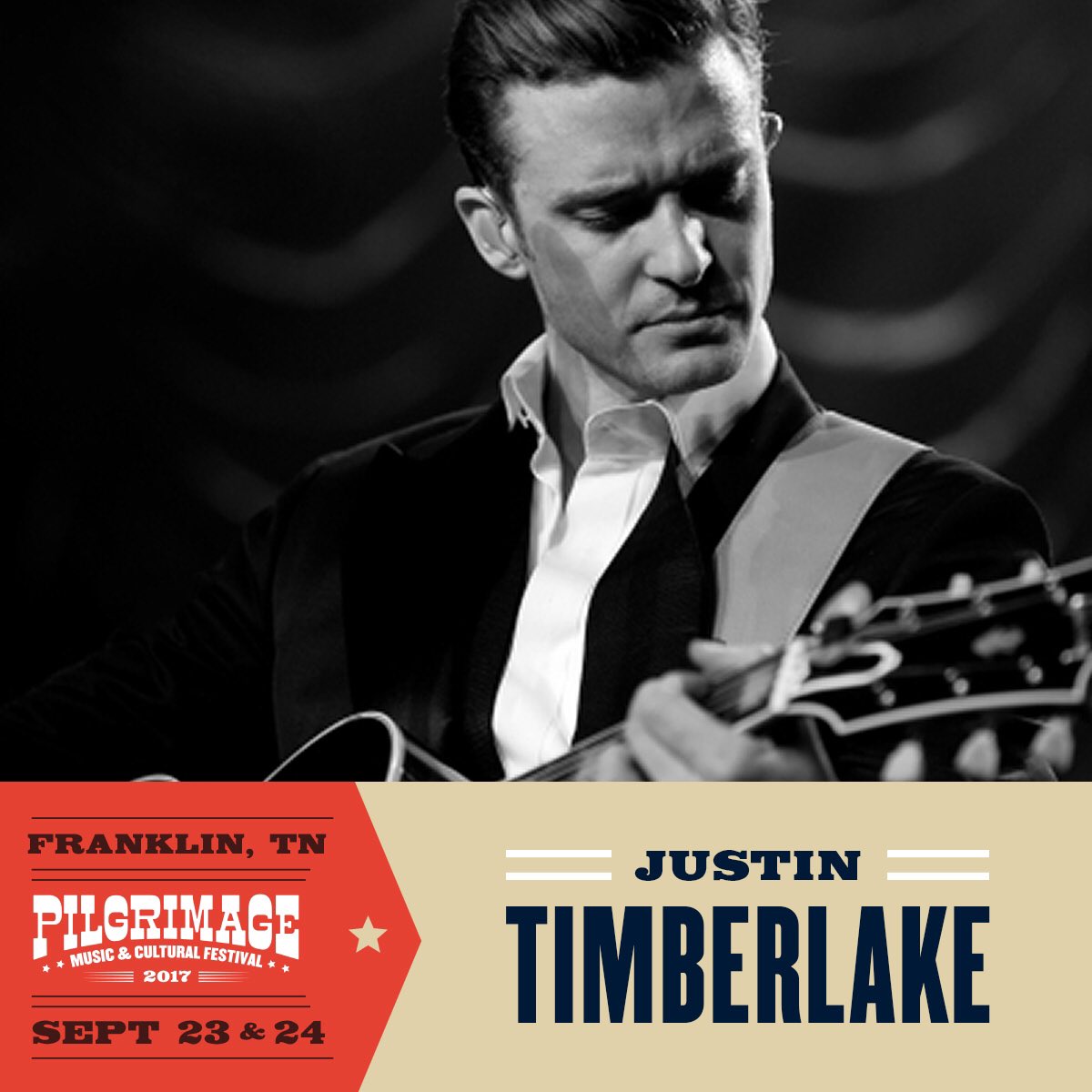 Oh shit, I am guessing that this means new Justin Timberlake music will be out by September 23rd? Usually when artists headline a festival it means that there is new music on the way, although I know that JT is one of the artist who put this whole festival together.

The lineup is pretty impressive though, of course Justin is a huge act but Eddie Vedder is also on the lineup, along with Ryan Adams, The Avett Brothers, and Fitz and the Tantrums to name a few.

I have to guess what this means for the new sound that Justin is putting together though. Is it going to be more folk sounding? Can’t wait to hear it!

Also, I think I need to figure out how I can get to this festival.

Honestly, I feel like this is just water under the bridge at this point. Does Justin really need to talk about why he left his boy band? It was obviously because he knew that he could be the break out star and he had a producer like Timbaland wanting to work with him, you can’t blame him.

Justin recently did a pretty candid interview with The Hollywood Reporter, where he got real about why he left the band at the height of their success, and personally I was a bit shocked at his answer. The guys are probably still a little salty about the break up and his answer? It just rubs salt in the wound.

“We were on a stadium tour, and I just felt like the whole thing was too big,” says Timberlake, explaining why he decided to bail. “It started as a fun snowball fight that was becoming an avalanche. And, also, I was growing out of it. I felt like I cared more about the music than some of the other people in the group. And I felt like I had other music I wanted to make and that I needed to follow my heart.”

I mean, ouch. Saying he just cared more about the music than they did? Ouch.

The interview is actually a pretty good one though, so I would click the link above and check out more but here are some other interesting parts of the interview.

On being famous since a young age : “I was about 15 or 16 years old. We’d just given a concert in Germany at a festival on this huge field. And we were in the tour bus afterward, driving on a dirt road, and I looked out the window and saw all these young, impressionable females running after the bus.” He shrugs his shoulders and gets to the point of the story: “I think we can all agree that I did not have a normal childhood.”

On his childhood : “You go through your life with your own traumas, big and small, and think, ‘It’s not that bad, I have a lot to be thankful for, my parents did the best they could,’ ” he says. “But then you have a child of your own, and suddenly it opens all the floodgates, and you’re like, ‘No, no, no! That childhood trauma really did f— me up!’ ”

On his new album : “It sounds more like where I’ve come from than any other music I’ve ever made,” he describes what he’s been working on. “It’s Memphis. It’s Southern American music. But I want to make it sound modern — at least that’s the idea right now.”

So there you have it, some great excerpts from the interview. One thing I found interesting was that he said he wasn’t very friendly with Ryan Gosling, someone that he once lived with while they were both in the ‘Mickey Mouse Club’ it makes you wonder if something went down.

Today Justin Timberlake turns 36 years old, which means that we are all getting older. When we were first introduced to JT  he was a fresh faced kid on the ‘Mickey Mouse Club’. Of course a few superstars came from there, but he was one of them.

After that he of course became the ramen noddle haired boy band member that teenage girls melted over.

Through out the course of his career JT has toyed with different sounds and hairstyles but at the end of the day, he is so talented he can make just about anything work. Of course no one could save “The Love Guru” but JT tried, that’s for sure.

Hopefully there will be a new album this year from him, there have been rumblings but nothing has been set in stone.

JT will go down as a legend that’s for sure.

Happy birthday, may it be filled with a lot of Souza tequila.

Hey! You! Yeah, YOU! I just flew from LA to Memphis to #RockTheVote !!! No excuses, my good people! There could be early voting in your town too. If not, November 8th! Choose to have a voice! If you don’t, then we can’t HEAR YOU! Get out and VOTE! #ExcerciseYourRightToVote

Well you heard the man! Justin wants us all to get out there and vote, so we might as well listen to him right? I must say that I am glad that he didn’t do any hashtags for who he supports. Of course he threw her a huge benefit party but still, it’s refreshing that other than that he has remained quiet about his political beliefs.

For the record, he didn’t even really publicize that, other people did. I think he may have posted a selfie with Hillary but still, he isn’t out there tweeting like crazy about it or anything.

Get out there an vote people!

Justin has finally blessed us with new music so I am going to bless him as being the coveted Willi Killiams Man Crush Monday of the week! I think that he deserves it. He did just put out the song of the year, and it is actually for a troll movie, not even his own solo work, so he is just out of control with talent.

Now being a Backstreet Boys fan my whole life it took me a while to admit the talent that Justin Timberlake has. He is a great performer, incredible singer, and an alright actor. I can’t say that I love his movies but he is always great on SNL, which is really all that matters.

Every generation has an Icon from it, I truly believe that ours is Justin Timberlake. The guy can sing, dance, act, and write his own music. The talent that Justin has puts other performers (and other Justins) to shame and he always does it while being so humble.

I believe that we will be seeing Justin just continue to evolve and put out incredible music as the years go on. I can’t wait to tell my grandchildren I grew up in a time where JT was on the top of his game.

Let’s be real though, he isn’t bad to look at either though, right? Those blue eyes that I could get lost in for days and that smile? Yeah, those help.

Everyone is worried that Justin Timberlake is going to be going country, want to know the funny thing? Usually his albums have more than one sound, he could have one country song and the rest can be a mom pop feel, or R&B. Justin can literally sing any type of music, that is something that I am positive about.

This is the kind of music that happens with Justin and Max Martin come together, it is just incredible. Max Martin is seriously a God when it comes to pop music and he has probably written some of your favorite pop hits, that’s a story for another day though.

Let’s just appreciate this song that will be in ‘Trolls’ and all of the celebrity cameos in the video. I am hoping that since James Corden is in the video there will be a Carpool Karaoke, can you imagine that? It would be the best one of all time.

The true King Justin is back, the Jester Justin can take a seat.

The other week I questioned whether or not JT was going to be making new music, looks like we no longer need to question it! Last night he posted a photo on Facebook with the legendary Pharrell Williams, one of his long time producers. Justin and Pharrell have collaborated on plenty of tracks together, hell they have been working together since JT decided to go solo.

It is time for JT to remind Bieber that there can only be one Justin on charts!

Hopefully JT and Pharrell create more hits like this one.

Yesterday good ol’ Justin Timberlake changed his cover photo on Facebook to this picture. I think that it can only mean one thing, right? New music has to be  coming, right? I understand that he needed a little break to be a dad and to spend time with his wife but it’s been long enough!

Rumors are that Justin is going to try and have a new type of country feel, which would most likely be incredible. After his performance with Chris Stapleton I am sure that he can do any style of music.

Thank God Justin is back to music and has given up movies for a little while.