Happy Halloween from Poppy, Branch and lil Branch. We be Trollin'…

As most people know, Justin Timberlake is a voice in the new movie “Trolls”, he also produced the whole soundtrack which is pretty bad ass, so it is a project he is very happy about.

Well, for Halloween the whole Timberlake family decided to get in on the action and dress up as characters from the “Troll” movie. Justin, Jessica, and Silas all went trick or treating in full on outfits. That hair couldn’t have been comfortable, right?

Honestly, I love this. Justin and Jessica have always been a fairly private couple so it is nice when they give a glimpse in to their personal life.

When you make your whole family dress up as the characters from the movie you're in but your wife secretly loves it and your son won't keep his troll wig on… Shoutout to @jessicabiel #2BranchsandaPoppy #Trolls #didIuseaholidayforselfpromo Happy Halloween, everybody!!!!

Few things make me happier than thinking about ‘TRL‘ and how it changed pop culture forever. Carson Daly dressing up as himself, well his former self is absolutely incredible. I think that this is my favorite costume of the year so far. Yes, plenty killed it but this costume is so simple and works so well, it’s just perfect.

Carson really tried for this costume too, he even painted his damn nails! He was such a trendsetter, right? Actually not really, he was constantly made fun of for how he acted towards different celebrities, and his nails, but he was the face of ‘TRL’.

In reality, all that was missing was Tara Reid, they were engaged for a short time in case you forgot about the romance. 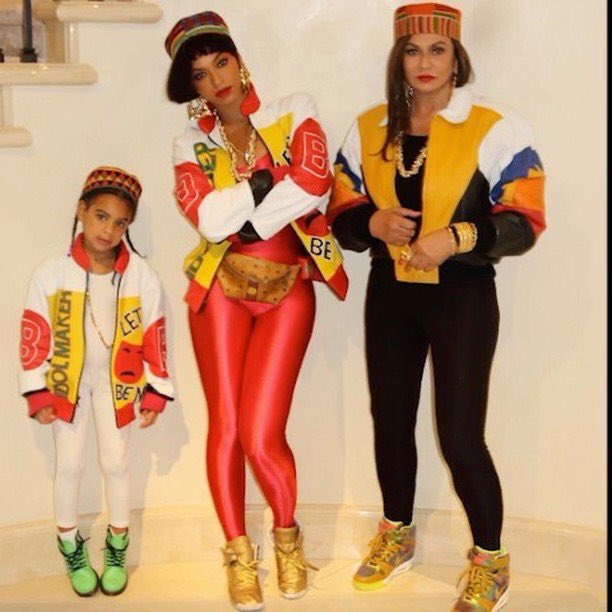 Can we talk about how incredible this is? Beyonce, Blue Ivy, and Beyonce’s mom, Tina, showed up to an 80’s themed party and showed up rocking these incredible costumes. I hope that they all also did some kind of choreographed dance.

In my opinion I think that Blue is one of the coolest kids in Hollywood. I don’t know why. She just seems cool to me. I mean her mom is one of the best entertainers of this generation, and her father is a rap God. So she just has this swagger about her. Way cooler than North West, just saying!

One of the top group costumes I have seen in Hollywood this year.

To be totally honest, I can’ believe that I didn’t think of people wearing a Ryan Lochte costume. He was a part of one of the biggest stories of the year and I am pretty happy that people decided to dress up as him, because it’s hysterical.

Whats even funnier is that Taylor and Nina went to the same party, totally separate, and wore the same costume. Well they weren’t wearing the exact same thing but they were impersonating the same person. Gotta love it.

Personally, I think Taylor wore it better but great costumes none the less!

We know what Ryan is probably thinking, right? JEAH! 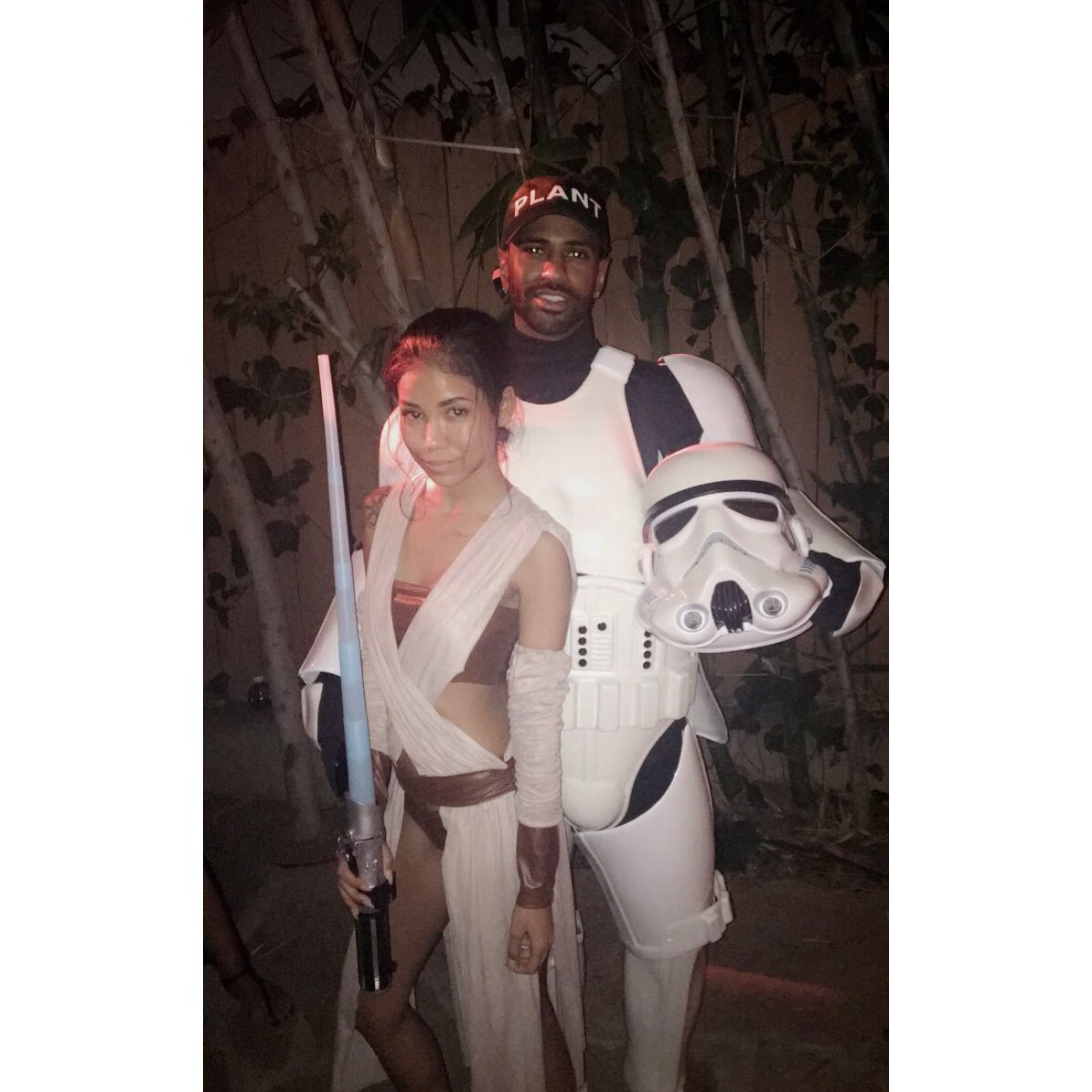 How freaking adorable is this? Jhene and Big Sean are one of my favorite musical couples. Their songs are absolute fire and well they are both extremely good looking, so they aren’t a bad couple to look at.

May the force be with this couple.

We all know that Demi and Nick are best friends forever, and it looks like they wanted to have matching costumes this year for Halloween! This was reportedly Demi’s Halloween party, which included a haunted house!

May I just say, that they both look absolutely incredible in their costumes? Demi, you slay like always and Nick, you’re just plain adorable.

I can’t be the only one who wishes they did this for a couple costume, rather than just two best friend matching, right? 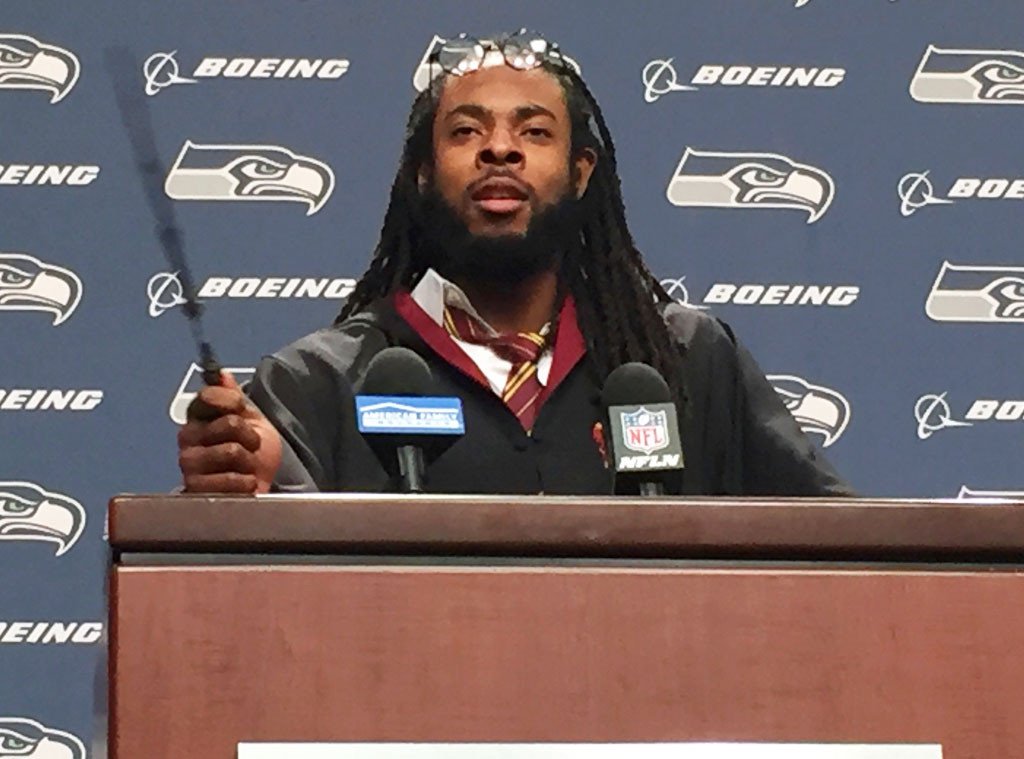 I know that this is probably all Halloween fun but I am a big fan of this move, I can appreciate it.

Sherman also announced that Quidditch is harder than football and he has decided to fully follow his heart and play that.

The NFL will miss you Richard, good luck on your Quidditch dream!

Listen, I know that everyone complains about how ‘SNL‘ isn’t as funny as it used to be and it should just be cancelled, but I have to disagree. Maybe it isn’t as funny as before, but it is still pretty damn hysterical. You have to give the cast credit. Well I would like to give the ladies of the cast credit. They are the ones bringing in the laughs for the most part.

This scene in particular kills me because it is exactly how girls on Halloween act. You think you’re going to go out and it’s going to be a magical night of dressing up and maybe finding someone dressed as your night in shining armor, when in reality someone throws up and only one of your heels break.

Usually the night will start off with selfies and looking cute, then end up with selfies that you pray you didn’t upload while you were black out.

Anyway, I just wanted to give this scene love because oh my god, it was perfect.

Also, I have a serious lady boner for Cecily Strong, have fun with that knowledge. Really though, these three at my favorite, of course I wish Kate McKinnon was in it, but she can’t be in every skit and I understand. These three ladies killed it though.

Here it is, Scott Eastwood just reminding us that he looks a lot like his father.

Over the weekend Scott took on the cowboy outfit for the 5th annual Hilarity for Charity to benefit The Alzheimer’s Association over the weekend.

This outfit is of course a nod to Clint’s character, The Man With No Name, and of course Scott crushed the costume. When he was asked what his father thought of the costume, Scott explained that he sent a photo but Clint isn’t big into texting, which is absolutely no surprise to anyone I am sure.

Scott, thank you for dressing up like a cowboy again, it is much appreciated.

Now when I first heard these rumors about Blake and Gwen being a couple I didn’t actually believe it could be a thing. I mean it made sense that there were rumors because the two were on a show together. The press couldn’t make up rumors about Gwen with Adam or Pharrell because both of those men are married. Actually, I don’t think the press gives a shit about who is married to who. That’s not the point though. The point is that I thought all of these rumors were straight up false.

That was until this Halloween weekend when they were spotted together at not one, not two, but three Halloween parties together! I mean if they were at one together, I could understand that. Mutual friends, whatever, but three? Three parties in one night though, that is some serious couple stuff.

I can’t lie I kind of hope these two make it, the California skater girl and the cowboy, how romantic?