Kim recently appeared on the cover of GQ for the first time and of course she had to talk about Taylor Swift during the interview. It is very clear that Kim and Kanye love to talk about Taylor, well, at least Kanye does. Kim is basically his puppet so at this point they are one in the same.

Here’s what she had to say.

On Taylor Swift knowing about Kanye West‘s song Famous and the conversation being filmed: “She totally knew that that was coming out. She wanted to all of a sudden act like she didn’t…I swear, my husband gets so much shit for things [when] he really was doing proper protocol and even called to get it approved. What rapper would call a girl that he was rapping a line about to get approval?…Rick Rubin was there. So many respected people in the music business heard that [conversation] and knew. I mean, he’s called me a bitch in songs. That’s just, like, what they say. I never once think, [gasping] ‘What a derogatory word! How dare he?’ Not in a million years. I don’t know why she just, you know, flipped all of a sudden…It was funny because [on the call with Kanye, Taylor] said, ‘When I get on the Grammy red carpet, all the media is going to think that I’m so against this, and I’ll just laugh and say, ‘The joke’s on you, guys. I was in on it the whole time.’ And I’m like, wait, but [in] your Grammy speech, you completely dissed my husband just to play the victim again.” (credit)

So there it is. Kim doesn’t understand why being called someone’s bitch is a derogatory thing and she thinks that Taylor is playing the victim card. Well, she isn’t totally wrong. Ever since the whole Kanye thing Taylor has done a great job at playing victim about the whole situation because she was. Kanye went up on stage and stole her moment, she was absolutely the victim. She does keep bringing up that card but hey, she was treated badly by Kanye and tried to put it in the past but Kanye keeps bringing it up.

“Taylor does not hold anything against Kim Kardashian as she recognizes the pressure Kim must be under and that she is only repeating what she has been told by Kanye West. However, that does not change the fact that much of what Kim is saying is incorrect. Kanye West and Taylor only spoke once on the phone while she was on vacation with her family in January of 2016 and they have never spoken since. Taylor has never denied that conversation took place. It was on that phone call that Kanye West also asked her to release the song on her Twitter account, which she declined to do. Kanye West never told Taylor he was going to use the term ‘that bitch’ in referencing her. A song cannot be approved if it was never heard. Kanye West never played the song for Taylor Swift. Taylor heard it for the first time when everyone else did and was humiliated. Kim Kardashian’s claim that Taylor and her team were aware of being recorded is not true, and Taylor cannot understand why Kanye West, and now Kim Kardashian, will not just leave her alone.”

That is probably the best response ever right?

Just leave Taylor alone and stop being so obsessed with her geez! Kimye go away!

Now obviously I love Taylor Swift so I am very bias when it comes to what I am about to write. I have been a fan since she first came out and even though I don’t really love all of her new songs I respect her. She is changing the game of music and that is rather impressive, if you don’t think so then you’re crazy.

I actually really enjoyed the whole interview. The writer casually writes about how Justin Timberlake called Taylor and asked to sing “Mirrors” with her. That’s pretty incredible, right?

Here are a few key points of the interview

On the public’s assumption that ‘Bad Blood’ is about Katy Perry: “You’re in a[n] interview, and the writer says, ‘Who is that song about? That sounds like a really intense moment from your life.’ And you sit there, and you know you’re on good terms with your ex-boyfriend, and you don’t want him—or his family—to think you’re firing shots at him. So you say, ‘That was about losing a friend.’ And that’s basically all you say. But then people cryptically tweet about what you meant. I never said anything that would point a finger in the specific direction of one specific person, and I can sleep at night knowing that. I knew the song would be assigned to a person, and the easiest mark was someone who I didn’t want to be labeled with this song. It was not a song about heartbreak. It was about the loss of friendship.”

On media speculation about all of her songs: “I don’t feel there is any injustice when people expand beyond my music and speculate on who certain songs might be about. I’ve never named names, so I feel like I still have a sense of power over what people say—even if that isn’t true, and even if I don’t have any power over what people say about me. The fact that I’ve never confirmed who those songs are about makes me feel like there is still one card I’m holding. So if you’re going to look at your life and say, “I get to play sold-out football stadiums all over the world. I get to call up my favorite artists and ask them to perform with me, and most of the time they say yes. I get to be on the cover of this magazine”—this is all because I write songs about my own life. So I would feel a little strange complaining about how it’s covered.”

On if she ever feels lonely: “I’m around people so much. Massive amounts of people… So then when I go home and turn on the TV, and I’ve got Monica and Chandler and Ross and Rachel and Phoebe and Joey on a Friends marathon, I don’t feel lonely. You know, during the first few years of your career, the only thing anyone says to you is ‘Enjoy this. Just enjoy this.’ That’s all they ever tell you. And I finally know how to do that.”

On if she’s worried her lyrics will be perceived differently than intended: “No. Some of the things I write about on a song like ‘Blank Space’ are satire. You take your creative license and create things that are larger than life. You can write things like I get drunk on jealousy but you’ll come back each time you leave, ’cause darling I’m a nightmare dressed like a daydream. That is not my approach to relationships. But is it cool to write the narrative of a girl who’s crazy but seductive but glamorous but nuts but manipulative? That was the character I felt the media had written for me, and for a long time I felt hurt by it. I took it personally. But as time went by, I realized it was kind of hilarious.”

I love it, I love Taylor the end.

Read it all here, there are pictures too! Taylor looks stunning so check it out! 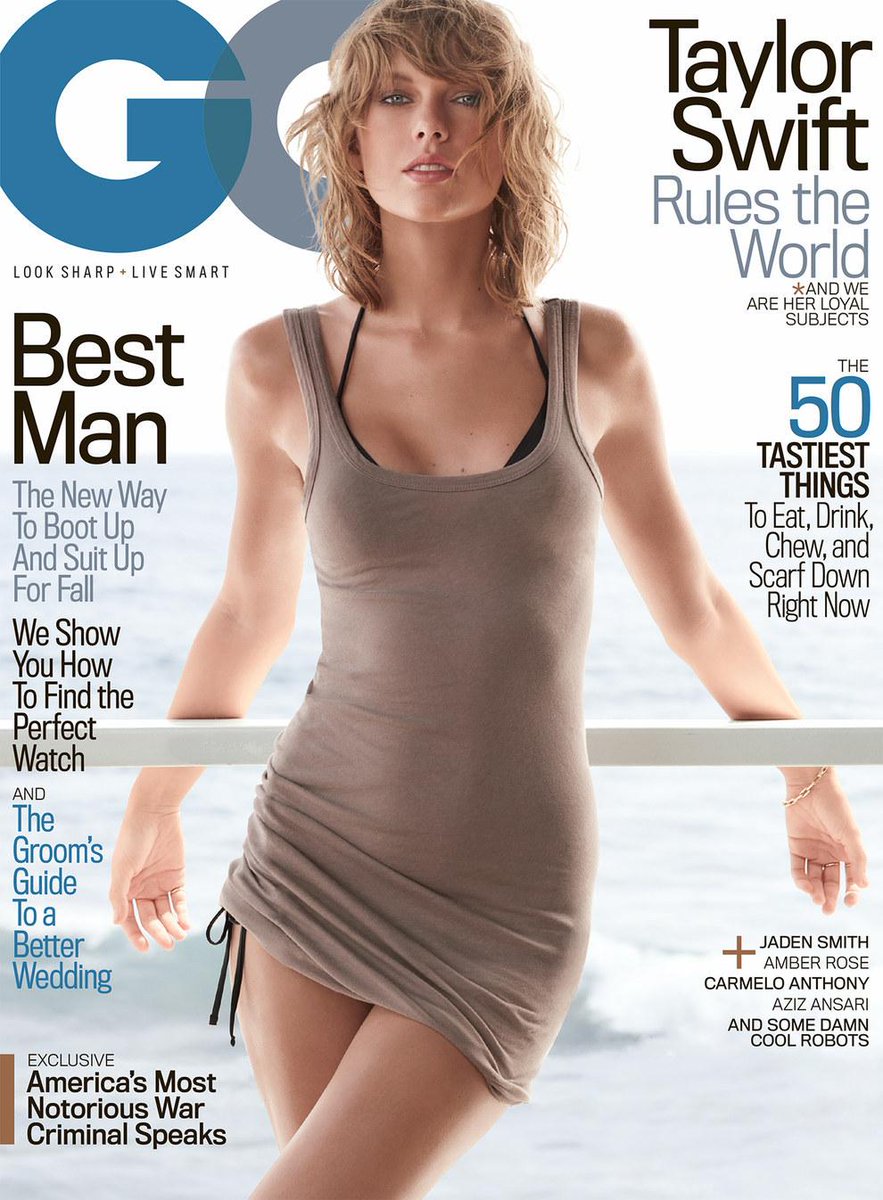 This is Tay’s first time on the cover of this specific magazine. Yes those are abs, yes those are incredible tones arms, yes this is sexiest Taylor Swift has ever looked.