I love Justin and Jen, they are probably in my top ten favorite celebrity couples. They step out when necessary but they aren’t too in our face about their love. The couple will walk red carpets but that is about it.

Justin even offered a rare glimpse into their relationship.

You could say these two are madly in ‘Lourve’. 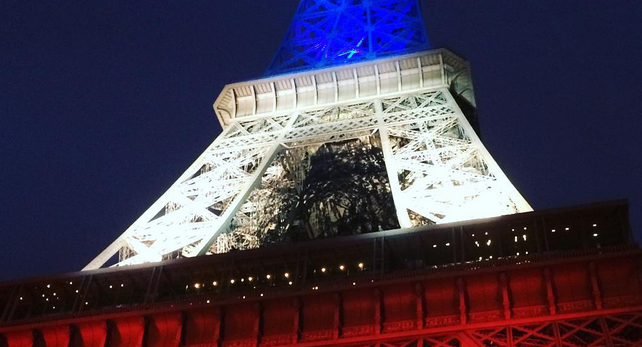 So I have held back from writing about the terrorist attacks in Paris simply because I do try and keep my blog light. I try and write funny stuff, I try and make people laugh with my writing. Also I have no words for the tragedy that Paris has suffered. No words I write could possible make the situation better. Over the weekend there was a lot of violence all over the world but Paris stands out. This was a plotted attack by evil people. People who don’t deserve to see the light of another day, I genuinely believe that. An eye for an eye will make the whole world blind, but at times it seems like there is nothing more that can be done to put a stop to evil. Love can only go so far.

I am writing this post though because I believe a lot of people want to help the victims of this tragedy. Of course there is the International Federation of Red Cross and Red Crescent Societies (IFRC) which directly supports the French Red Cross and has announced it has hundreds of volunteers on the ground in Paris working with victims and their families.You can also donate to Friends of Fondation de France, Inc. which is a French charity that helps during times of emergency.

If you are located near Paris here is a list of ways you can help.

Here at Celebrities Are Tragic, I would like to send my thoughts and prayers to all of those that had to deal with loss, pain, and anger due to these events.

Watching this video you can totally tell that they are banging too, look at their chemistry! Why can’t they just come out and say that they are dating? Drake is such a huge step up from Chris Beat-her-down Brown.

So watch the video and enjoy it. I have nothing more to say other than I think these two should get married right now.

So I feel like everyone knows that Robin Thicke is the ultimate creep in Hollywood. I mean he let a little girl twerk on him, yes it was Miley Cyrus and she was responsible too but he also let it happen. His wife Paula Patton laughed it off and they always say they have a very unconventional marriage with each other after all those naked girls were in the Blurred Lines video.

This picture was taken in Paris, France after one of his performances and let me make this clear, this is not Paula Patton. Let me repeat, this is not Paula Patton! It is pretty bad that this is photographed and no one will probably hear about it. I mean look at this Justin Timberlake wannabe, you got lucky with Blurred Lines even though feminists fucking hate you now. This picture isn’t helping either.

I sit here and wonder though, does all of Hollywood cheat? I feel like it would be hard to say no to every single person in the world throwing themselves at you. There is a way to do it though right? Not in front of a fucking club would probably be one of the ways to go about it Robin Thicke you dick.

I don’t know, this will probably just get swept under the rug but seriously, fuck you Robin Thicke you creepy man. Try and stay with your wife and stop having your hands all over random club goers.