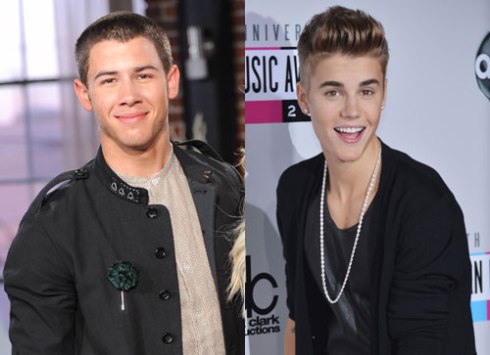 Justin Bieber throws eggs and Nick Jonas just throws some shade, that is the way to play it. So for anyone who doesn’t know Bieber got caught throwing eggs at his neighbors house. This is the same neighbor that said Justin spit in his face and all that other stuff. Actually I think that is all, he just said Bieber spit in his face which is fucking gross enough. Anyway, he ended up throwing eggs at this guys house and then ran back to his house the second the cops showed up. He is clearly a little thug with his eggs but can’t handle when he gets confronted by it. TMZ has the video if you are interested in checking it out.

So today my little perfect angel Nick Jonas tweeted “Wait…egging is still a thing?” Now this is perfect for so many different reasons. Number one because Nick Jonas is so much better looking than Justin Bieber, that is just a fact. Then there is the fact that Nick Jonas dated Justin Bieber’s ex Selena Gomez for a while. Can you imagine how Selena feels? She is just sitting there babysitting this child while Nick Jonas is off dating Miss. Universe or whatever she is.

I don’t know Bieber you started a feud with my girl Taylor Swift now Nick Jonas is throwing shade at you. I think it is time for you to throw in the towel for a while little man. Clearly you need to cool off a little bit.

Nick Jonas on the other hand, I don’t even know if you are truly talented but you are beautiful so it is okay. Thanks for throwing some shade because I didn’t know egging was still a thing either. Child’s play, you are too busy dating Miss.Universe while Justin is with his sloppy seconds that makes him cry on the daily.

You win Nick Jonas, you win.