‘Friday Night Lights‘ may have ended but the Taylors are still the greatest television couple of all time. Connie Britton made sure to wish Kyle Chandler a happy birthday and that is something that I can appreciate. Everyone should appreciate it!

Also can we all appreciate how dreamy Kyle Chandler is?

Now let’s have a prayer circle that one day we get a ‘Friday Night Lights’ movie.
Visit: Celebrities Are Tragic || Facebook || Twitter

Word on the street is that not everybody was excited that ‘Nashville’ made a come back. Of course the fans rallied hard, my article about why it should stay on the air was sent all the way to the higher ups at ABC, yet the main character is leaving?

Wait, what? That’s right. Connie Britton is reportedly leaving after season 5 and will only be in about half of the episodes for season 5. Truthfully I don’t know how I feel. Again, the fans rallied so hard around bringing this show back I almost feel like it is a slap in the face.

As far as I know, Hayden will still be a full time member which is really all I care about. My only worry is, will the show be able to survive without Connie? I mean Rayna James is the show.

What do you think about the Connie leaving the show? Will it survive?

So, as many people know around this time every year, after the May sweeps shows get cancelled, new shows get picked up by different stations, and shows also get renewed. ABC cancelled a lot of shows, a lot of shows that people seemed to really enjoy too. Of course they kept their Thursday night line-up, you can’t mess with Shonda’s shows, but they got rid of beloved show, ‘Nashville’. A show that is a great drama about country music, with leading ladies Connie Britton and Hayden Panettiere, along with a great supporting cast.

The music, the storylines, and the acting has always been on point. So why did ABC cancel it? According to them the amount of viewers weren’t great, and they wanted to make room for some new shows. Listen, the ratings may have dipped but it was simply because the storylines had to change due to one of the main actors putting her health over her career, which is something we should all applaud. When Hayden left for a few episodes, the rest of the cast really picked it up with their acting and singing, it wasn’t like the show fell flat.

Since the news broke of the show not being picked up for another season, social media has been absolutely insane. They have the hashtag #BringNashvilleBack trending and last night along there more than 40k tweets about wanting the show to be brought back.

There have been reports that other stations have been looking to pick up ‘Nashville’ but who knows how true that is. Although when Fox made the mistake of cancelling ‘The Mindy Project’ Hulu swooped in and saved the day, so it is possible, right? More people are starting to tune into the internet television streaming sites than cable network anyway.

The truth is that this cast is extremely talented, from their singing to their acting, they can kind of do it all. Right now they are actually on a ‘Nashville’ tour which brings ABC money, I don’t see them mentioning that at all though. Great attendance, ticket sales, all of that is great but apparently the studio doesn’t think that this show is worthy of another shot, which is a shame.

Remember when NBC cancelled ‘Friday Night Lights’ but fans sent a bunch of light bulbs to the studio to keep the lights on, so it was picked up again? Maybe we can send a bunch of guitar picks to the ABC studio or something.

There is still so much to this story that needs to be wrapped up, the fans and the characters on the show deserve the closure, especially after watching the show for four years.

Hulu, Netflix, CMT, literally anyone out there, pick up ‘Nashville’, people will watch and fans deserve a final season.

The worst part is, knowing ABC they are going to make ‘The Bachelor’ or ‘Bachelorette’ extend into Wednesday because unfortunately “reality” shows are cheaper.

Both Connie and Hayden have been nominated for Emmy’s, and I believe Golden Globes. This is a nominated show, it is just awful to see that ABC doesn’t care about substance anymore. 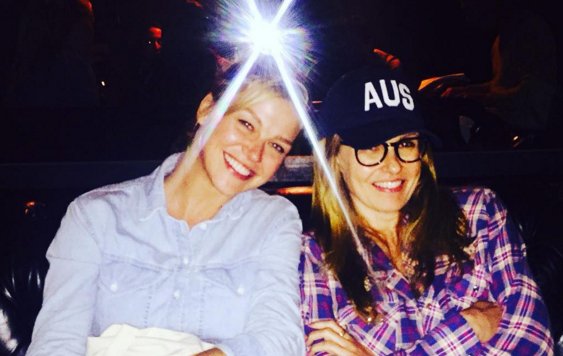 Doesn’t that saying along give you chills? My lord ‘Friday Night Lights’ was truly one of the greatest shows of all time. The writing, the acting, even the way that it was filmed, it is absolutely incredible. A show that will carry on for generations, I am sure of that. With a little help from Netflix it is like the show has been brought back to life!

Looks like Tammy Taylor and Tyra are still buddies, it truly warms my heart. Their relationship on the show was one of my favorites, so I am glad that they were able to meet up during the SXSW festival!

Apparently Connie was asked if she would be involved if there was a movie and she said absolutely, so that gives us some hope!

I will leave it at that, and leave my absolute favorite monologue from the show that was written for Tyra.

Wanna know why I cut it all off?

When I was four years old, I asked my mother; “Are there heaters in Heaven?”

I had just been diagnosed with end stage nephroblastoma, after several visits to a GP who denied anything was wrong and dubbed my parents “paranoid.” I’d overheard the doctors telling my family that the only hope of saving me, was an experimental treatment that might kill me anyway. But without it I had maybe two weeks left. The hospital was cold. I’d never felt air conditioning before.

Life in the White Palace (Granddad’s nickname for hospital) meant I got to grow up surrounded by children just like me. We were mostly bald, all tubed, taped, bandaged up and stitched back together. We were all missing parts, some obvious like eyes or legs, others more hidden, like lungs and kidneys. Those who still could, tip-toed around like little fairies because chemotherapy had destroyed the muscles in our legs and it hurt to put our heels on the floor. But we were all together, so no one’s appearance came into question. No one got laughed at or teased. We were all we knew.

And then I got really lucky. I survived, my hair grew back and I got strong again. I look relatively normal on the outside, but on the inside, I am still the same stitched back together little creature, in a world where people are judged so harshly for the way they look. It has always been completely incomprehensible to me. How can people think there’s time for that?

I was really inspired when I heard a story about a little girl who said she couldn’t be a princess because she didn’t have long hair, and I wanted her, and others like her to know that’s not what makes a princess, or a warrior, or a superhero. It’s not what makes you beautiful either. It’s your insides that count… even if you happen to be missing half of them.

Every scar tells a story, every baldhead, every dark circle, every prosthetic limb, and every reflection in a mirror that you might not recognize anymore. Look deeper than skin, hair, nails, and lips. You are who you are in your bones. That is where you have the potential to shine the brightest from. It is where your true beautiful self lives.

Thank you ABC network and particularly our creator, Callie Khouri for letting me change Scarlett’s hair, and my team, family and friends for helping me make the decision. If it makes even one person think twice about judging another, then in some small way, the world is better.
Self-esteem takes a lot longer to grow back than hair.
‪#‎BeautyWithin‬  (credit)

This is probably one of the most thought out, best written posts I have read in a while. I guess I never thought about how we take the smallest things for granted, things like hair. Every morning I wake up and complain because I have to do my hair, make it look nice, when there are people who would do anything to be able to have such a complaint.

There isn’t much more I can say other than thank you to Clare Bowen. Thank you for writing something so powerful that moved me to tears and opened my eyes to the challenges that many people of all ages face every single day.

Beauty comes from within and in a world where outward appearance means everything sometimes you have to take a step back and realize that you are more than a number on a scale, more than a haircut, and more than a diagnosis. You are alive, and you are beautiful.