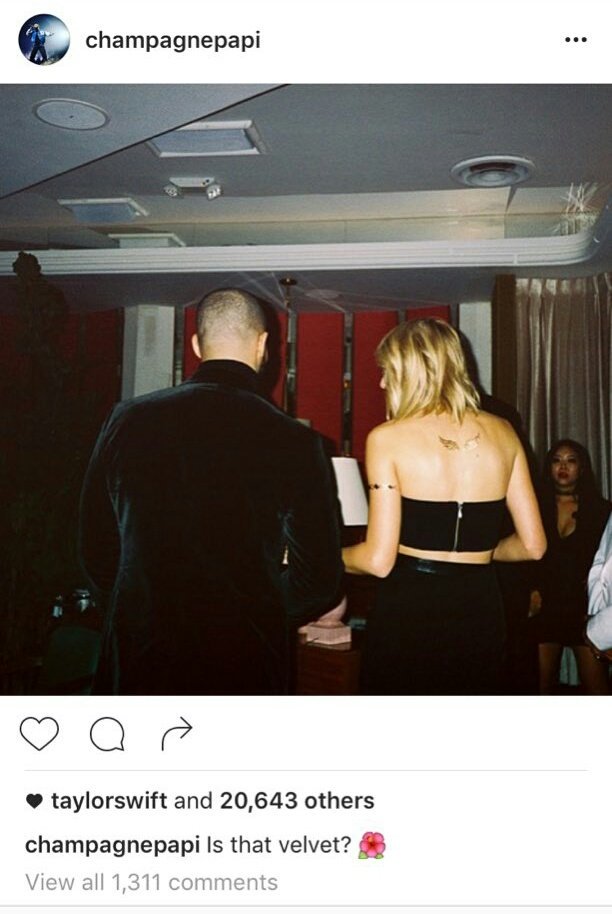 Taylor Swift and Drake  are playing with us, y’all! They are just trying to mess with us and it might be working a little bit. I personally don’t think that these two are actually dating, but it would be fun to think about right? The heartbroken songs that would come from this potential disastrous relationship.

Word on the street is that these two are actually recording new music together. Which I am more than happy about. Drake and Taylor are both hit makers, so a song together would probably stay at the top of the charts for an extremely long time.

I don’t mind them playing games though, trying to trick the public that they might possibly be dating when in reality they are collaborating in a totally different way. I don’t hate that one bit.

You tell me! Are you excited for a potential collaboration between them, or are you just hoping they will have a quick romance and be over with?

God bless the people over at E News asking Justin Timberlake if he would ever work with Britney Spears. Judging by his reaction he was caught of guard and said that he would totally be down for a collaboration.

In my opinion I think that Britney would absolutely do it. Britney is a sweetheart and would probably love to work with Justin, just because the song would be the biggest selling song of all time, I promise you that.

So, they can both be totally down for a duet, but it is also totally never going to happen. I am 99.9% sure that we will never see an actual Justin and Britney duet. If that .1% does happen I will admit to being wrong but there is no possible way Justin Timberlake would ever do it.

As someone who grew up in the 90’s and know that Justin and Britney are the pop prince and princess, I would love this to actually happen. As an adult now, I think it is time to let this go because it’s never going to happen, stop trying to make Justin and Britney happen again.

Can you imagine what this collaboration is going to sound like? I am seriously so excited to hear it. Maybe Liam will be the biggest break out star from One Direction? I mean crazier things have happened right? If hip hop artists are willing to work with him then he clearly has something going for him.

Are you excited for this collaboration? Tell me here!

Yesterday a picture was posted of both Justin Bieber and Austin Mahone in the studio together where they were supposidly making a collaboration. Well, now it looks like two groups of fans can finally come to peace with each other. The Beliebers and Mahomies, stop the war! They are apparently friends now, just stop the fighting!

A lot of people probably see this as a way for Austin to use Bieber’s fame and get some more recognition. Not me! I don’t think that. I think that Bieber is trying to get back some of his whole some image so he decided to hit up Austin for a duet. Bieber wants to be a rapper named Bizzle but we all know that will never happen, so he needs to win back tweens. How can he do that? AUSTIN MAHONE!

Sorry Bieber your time is up, I really think that it is time to step back and let Austin Mahone take over. He has it all and you have two half sleeves of stupid tattoos.

I will say this to Austin, be careful being friends with him, Taylor did let you open up on her tour and she does hate the Biebs. Pick carefully.