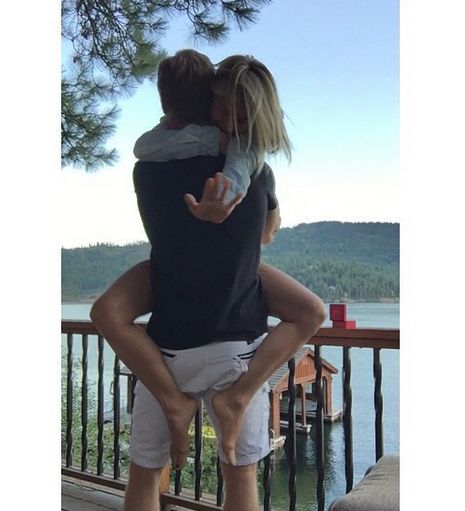 Good for you Lady Gaga, you go girl! Look at her starting off 2015 with a massive bang. I mean she looked incredible at the Grammys with Tony Bennett as her date, now she is officially engaged to Taylor Kinney. If you aren’t familiar with Gaga’s hot fiancee he is on the show ‘Chicago Fire’, he was on the show ‘Vampire Diaries’, and he is a certified hottie.

A little bit of background about the couple was that they met while filming the music video ‘You and I’ and have been together ever since. Just a nice little love story about an art geek and a jock. That is honestly how I think about it. It is kind of like ‘The Breakfast Club’ with the basket case and the jock, right? I mean we all know that Gaga is artistic, and kind of a fucking weirdo, so it fits.

Honestly, I wish nothing but absolute happiness to this couple. I personally enjoy Lady Gaga, I didn’t like her last album but I can respect what she does. Let’s be real she is a legend in her own right. Taylor, you are just an extremely handsome man.

Just in case you weren’t aware these two beautiful creatures are now engaged, in fact they have been for a little while. This is the first time that Nikki is showing off that massive rock though. Before I go any further, can we just say what we are all thinking? I wish I was her. Yup, Ian is one of the hottest men on television and he cares about the planet and animals. I mean who doesn’t love a hottie with a heart of gold?

Now that I got that out of my system, let me continue. These two have only publicly been together since about July, but I think this one may last. They both are beautiful, so that helps. They both care about our planet, and they have already adopted a ton of animals together. How precious is that?

After reading some comment sections I have found out that not many people are aware of who Nikki Reed is. They know her from being the bad bitch Rosalie from ‘Twilight’ but that is it. Let me give you some facts about Nikki Reed and why I love her so much. First and foremost she co-wrote and starred in one of the best movies of all time ‘Thirteen’. It is a movie I have seen probably a hundred times, and I will force my children to watch. Drugs are bad kids, don’t do drugs. She was also on ‘The O.C.’ another thing I was obsessed with. Of course her character was dating Ryan, I wanted Ryan and Marissa together, so I hated her, but that isn’t the point!

Congrats to the happy couple and I hope that you two have insanely attractive children together and save the world together too!