Last night I was watching the Teen Choice Awards, realizing how old I am and then this magnificent man walked onto the screen. Oh my god, Josh Peck is a babe now. I mean absolute stud muffin. He went from being that fat funny kid, to being the hot funny guy, good for him!

I don’t really have anything more to say other than Josh Peck is hot. I mean I would have never thought that after ‘Drake and Josh’ that Josh would be the one still around. Don’t be mad at me for saying that, it’s just Drake had that quality. Josh was funny, but it was like Keenan and Kel, I never thought that Keenan would be bigger than Kel, but it happened. Things happen! Life changes and does things you wouldn’t expect!

Apparently Josh is going to be in a new show called ‘Grandfathered’ with John Stamos, so I might have to check into that. I mean those two handsome men on one screen? Have mercy.

God bless Zac Efron and his perfect body. There is really no story here, I just want to appreciate this man. God knew what he was doing when it came to Efron. I mean, have mercyyyy!

I wish Zac only filmed movies in Hawaii because of all these hot ass shirtless pictures.

Thank you Zac for looking the way that you do, I love you.

Thank you JustJared.com for posting these pictures because I have never been so excited to watch anyone golf in my life. Golf is by far the most boring sport on the planet but with Efron playing, well I could watch it all day.

Is there anyone hotter than Zac Efron? No really, I am wondering because I dont’t think that there is. Channing Tatum is up there but Efron, there is just something about him. Maybe it is those bulging muscles, his blue eyes, or the fact we know he is a bad boy but tried to hide it for so long. Alright he is a reformed bad boy.

For years I have been telling my friends that Leonardo DiCaprio is no longer sexy, he isn’t hot, he isn’t god looking anymore. He has lost the thing that made him hot, meaning his looks. They of course would fight me on it saying that he was and still is one of the sexiest guys on this planet. No, no, no, no.

I mean if this picture of anyone else people would be saying how gross he looks with his lil beer belly and his bun. Nope, it is Leonardo DiCaprio so it is sexy! I don’t understand! Can you imagine if this was someone like, Adam Sandler? People would rip him to shreds!

I guess looks don’t matter if you played Jack Dawson, women will love you for life and obviously Leo takes full advantage of that. 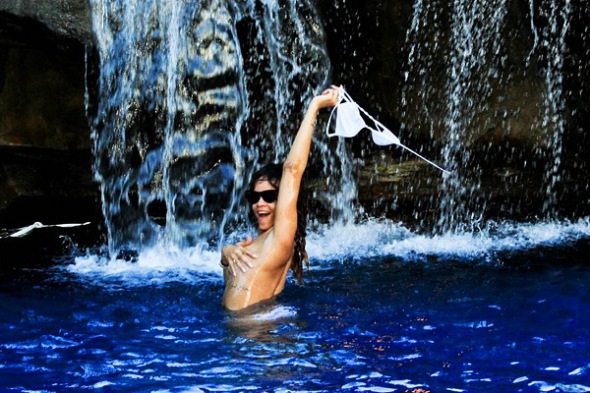