“Their three years together just ran its course,” our source tells JJ. “They have so many great memories together but couldn’t make it work in the end. The break-up was amicable – there was no drama whatsoever. Emma and Evan are even still friends!” (http://www.justjared.com/)

Thank God this relationship is over, it was the worst. I remember everyone thought that they were so cute, but like they were violent. There would be pictures of them fighting in the street, and remember when Emma punched him right in the face? Yeah, that shit ain’t cool. Domestic violence is domestic violence.

Also, I hope that this whole Evan Peters obsession ends soon. He is not attractive, stop tricking your mind into believing that he is.

I kind of feel like this shouldn’t be a surprise after what went down a few days ago with him leaving the tour. I know that One Direction fans will hate me for this, but who does he think he is? Who does Zayn Malik think he is leaving the band high and dry? All boy bands need five boys in them! Also, you don’t quit a band before the star of the band quits it. I think that we can all agree Harry Styles is the biggest star out of the five boys. He is the Justin Timberlake, he is the Nick Carter, you like the other guys but Harry is the one that people see when they look at One Direction.

Can I just say that I think his way or saying he wants to live a normal life is absolute bullshit. That would be like Bieber saying he wants to live a normal life. Guess what, normal is out the window for you. Zayn you were in one of the biggest boy bands of all time, everyone is going to recognize you. Enough with the oh poor me routine. Yes, people are constantly in your face but guess what, you have more money than any of your fans will ever have. Well most likely you do. I wonder how they will deal with him breaking his contract and all of this.

Zayn you pulled a total Ginger Spice move, not cool.

Tyler Posey and his fiancee Seana Gorlick have ended their engagement.

Tyler added that he was doing “okay” but when asked if they were still friends, he replied “I don’t know.”

Tyler and his fiancee announced their engagement over a year ago and the two had been together for quite some time.

I feel like this shouldn’t really be a surprise to anyone, they were high school sweethearts, he got famous, then they broke up. I think that if you look through records it is usually that people don’t marry their high school sweetheart. The odds are even more against you when you are an actor, right? Usually you get married like four times when you are famous and it is absolutely fine!

Everyone is saying how sad it is but guess what, I am sure that the two of them will do just fine on their own. No need to worry since Tyler is freaking gorgeous and his fiancee well she is young. It isn’t the end for either of them.

What do you think happened though? Tyler probably hooked up with someone, right? Like there is a kind of high percentage of that, right?

Personally I am sick of writing about this couple but today I saw the video posted above and I died laughing. Apparently Selena has been tweeting a whole bunch of stuff about how God is her one and only, or something like that. People were starting to question their relationship again after Bieber was spotted out with Selena’s mortal enemy Kendall Jenner and then Selena posted a picture with Miranda Kerr, basically the reason that Orlando punched Justin. Oh and Selena unfollowed the Biebs in Instagram which is the ultimate slap in the face, right? Especially now to unfollow someone, you might as well stab them in the heart.

Anyway this video was posted today from someone who happened to be at the Saint Martin airport at the exact same time that Selena and Justin were there to catch their flight to Paris. Well you can see Selena storm in and basically throws her purse down in a fit of anger before she just stands there looking at the van that Bieber was sitting in. He stays in there for a solid three minutes before exiting, walking right by Selena and go his gate. She follows behind but there is absolutely no interaction.

So let’s be real, does anyone even care about these two anymore? I have come to the conclusion that neither will ever have a serious comeback, especially not Bieber, he is done for. Nick Jonas is what is hot right now, Bieber you are old ass news!  Selena there is still a tiny sliver of hope left for you.

Britney Spears just dumped her boyfriend of 18 months … after finding out there’s a video of him cheating on her that’s being shopped around Hollywood.

We’re told David Lucado is seen in the video making out with a woman and dancing with her. It looks like they’re in someone’s living room. We’re told the video was shot in early August.

When we called Lucado … a rep told us, “David is very, very in love with Britney. This is unfortunate and he hopes that it all works out.”

Well, it didn’t. We called Britney’s camp for comment, and we were told her father Jamie wanted to say something about it, but wanted to tell Britney first. It appears as soon he told her … she broke up with David.

Read more: http://www.tmz.com#ixzz3BjhrdMJN
I had such high hopes for these two! Ugh, this just breaks my little Britney Spears loving heart! I really thought that these two would make it. He wasn’t famous, she needs someone who doesn’t want to be famous. Nope, he had to go and cheat on Britney with some chick in a living room? Like who in their right mind would cheat on Britney? Now I understand she is a little crazy but she seems like a good time. Can you imagine all the hate this man is going to receive? Britney has an absolutely insane following!
I mean this is probably crazy but maybe now Britney and Justin can finally work out? That would be great, my 90’s heart would explode. 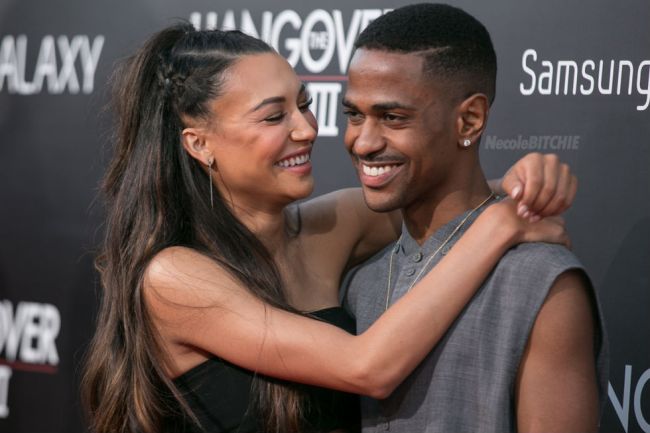 Can we be honest? If anyone really surprised that they two are no longer together? They have been together for about eight months or some shit, already got engaged, now they are broken up. Recently people are saying that Naya is trying to be the next Kim Kardashian so going through rappers could be her thing, right? Just trying to get her name out there by dating up and coming rappers.

Recently in a song Big Sean rapped about how Naya was “on glee and shit, probably making more money than me and shit” maybe that had something to do with the break up. Naya was too rich? No, that is a joke. People are saying that she is too jealous, some shit like that.

Naya did send out a pretty funny text claiming that Big Sean stole some of her Rolex watches and he is saying that is nothing but a lie.

It is time for all music lovers to rejoice since The Wanted have finally decided to stop making music! Yes! I mean if your E! reality show gets cancelled you probably don’t have much going for you anyway. Let’s be honest though this band was one of the worst boy bands of all time and I mean that. The fucking worst.

To start off these guys tried to have a fist fight with One Direction, fuck you guys, at least their music is good. Oh the bald one also fucked Lindsay Lohan, atrocious, and the weird elf looking one dated Ariana Grande. Then the kind of attractive one with black spikey hair was engaged, and the other two are not attractive. What did they think they were going to do? You could only do so many versions of the same song. ‘Glad you Came’ wasn’t the worst song in the world, the rest of their songs were though. ‘Walks like Rihanna’ what the fuck was that?That was the best song you could think of? There are five of you! At least one needs to have a brain.

The nail in this coffin was when they tried to make fun of the two boy band legends, the two bands that made boy bands cool in the 90’s. Backstreet Boys and Nsync, don’t you even try to think you are better than them. Fuck you guys!

So let me make myself clear, I am not glad you came but I am beyond happy that you are finally leaving. They will probably try and make a come back but by that time no one will care about them.