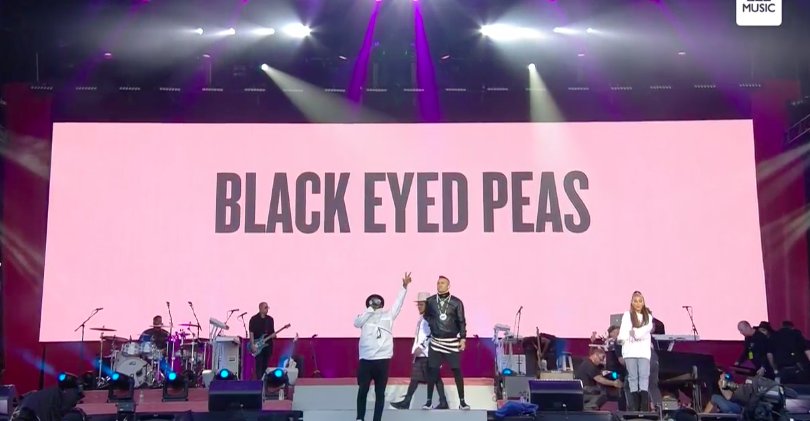 Honestly, who the fuck does Fergie think she is? She just thinks she can leave Black Eyed Peas forever? How dare she?!

Although I wasn’t even really aware that the Black Eyes Peas were making a come back, I had a feeling that Fergie wouldn’t be a part of the band if they did. She has been promising a solo album for like three years and hasn’t produced shit.

The band was doing an interview with magazine Ahlan! where Will confirmed the situation.

“Since the beginning of Black Eyed Peas, we’ve always had amazing vocalists that appeared on the mic with us. People like Macy Gray, Esthero, Debi Nova, Fergie. On Elephunk, there were several females that appeared on that album,” will.i.am said. “Obviously Fergie was the featured female, but on songs like ‘Let’s Get it Started,’ it’s Noelle [Scaggs], and then Fergie, songs like ‘Latin Girls,’ it’s Debi Nova, and ‘Request Line,’ it’s Macy Gray. We’ll always work with good females.”

I am always going to say that Black Eyed Peas were one of the most innovative band of my lifetime (I am 26) because even 15 years ago when they were releasing their first album, that music could be released now and still be a hit.

Hoping that Fergie gets permanently replaced by Nicole Scherzinger.

So let me be clear, I am kind of uncomfortable with this song. I kind of love it, but I am also a little uncomfortable. Mostly because I can picture suburban moms losing their shit when they hear this. Not complaining just getting buck wild and dancing their asses off while pouring milk on themselves. So thank you Fergie for that scary picture.

As for the music video, I get it. I understand why she brought some of the hottest celebrity moms out there for the video.

I am not ruling out Fergie’s new music after this one song though. There are always a few duds on an album so again, I won’t hate on the music just yet. I just hope that we get some more bops like ‘London Bridge’ and ‘Glamorous’ that’s all I want.

Fergie ferg, I will love you long time, I just can’t love this song yet.

On a somewhat related note, can we get Black Eyed Peas back? Their music was ahead of their time, I am positive that if they were to release any of their hits from back in like 2004, they would still be hits today.

No word on when her new album will be out but we can all agree that The Dutchess is back!

Also if this is just a preview for what she has to come, I am ready.

Fergie, I have been waiting for new music for what feels like a decade. Sure she came out with ‘L.A. Love’ not long ago but that doesn’t count. That was simply a single and she was obviously just testing out a song. No album followed the single or anything.

Today though, today she gave us a taste of what she has been working on and I don’t think that we are ready. We are not worth of new music from The Duchess.

People can say what they want about Fergie but homegirl can sell music and she has always been ahead of her time. I mean I know that Black Eyed Peas were a band but I am positive that if they were to come out today, as a new band, they would be on the top of the charts. The group was well ahead of their time.