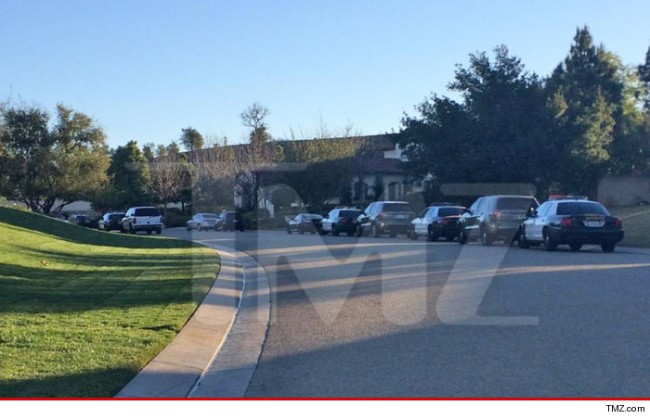 8:26 AM PT — Deputies are detaining Justin in his garage right now while they search.  We’re told they are also looking for surveillance video from Justin’s house that might capture the egging incident.

Eleven L.A. County Sheriff’s patrol cars descended on Justin Bieber‘s house a few minutes ago and they are executing a search warrant in connection with the egg-throwing incident … law enforcement sources tell TMZ.
Sources tell us … deputies are looking for any evidence that links Bieber to the egg assault on his next door neighbor.
We’re told this is a FELONY search warrant — meaning Justin is under a microscope for a crime that could land him in prison.
Sources say cops will look for anything that is relevant to the egg incident, including other eggs in the house and possible video.  Sheriff’s deputies have looked at TMZ’s video of the incident and want to see if someone inside Justin’s house videotaped the incident as well.
By the way … looking for other eggs may sound silly, but it isn’t.  There could be some sort of identifier that links what’s in Justin’s fridge to the broken eggs outside.
Here’s the thing … If in the course of the search cops find something illegal — like drugs — it’s fair game.
We’re told there’s a battering ram at the scene

Read more: http://www.tmz.com#ixzz2qOMGxxju
So there is a part of me that kind of feels bad for Justin Bieber right now, I mean everyone has thrown an egg or two in their life. Although usually when people do that it is on Halloween and they are like 13. It doesn’t usually happen on an idle Friday night when you are a 19 year old global superstar that is starting to have a really bad track record.
Why cause more trouble when you know that the cops have their eyes on you? Stay under the radar for a little bit, damn.
Also if Bieber spit in my face I would have it out for him too, calling the cops about throwing eggs would for sure be my first move of attack. Can you imagine Beiber right now though? He is sitting in his garage crying while they go through all of his shit. I think of it like when Justin Timberlake got Punk’d, that kind of reaction, tears for days. Not so tough now are ya Biebs?
I am going to say that if this behavior keeps up and I going to guess that Bieber will be in rehab by 21 and trying to make a comeback by 22, I know that is in two years but he is going down a slippery slope. This ain’t cute kid, time to grow up a bit. I am so sick of his mentors and management saying that he is just a kid, how would you act if there was a camera on you at all times. Uh Justin Timberlake turned out fine, Usher turned out fine, Ryan Gosling turned out fine, Leonardo DiCaprio fucks super models and is changing the environment. Find a new line to say Bieber PR team because right now, this isn’t a good look for him.
I can’t wait for his tweet tonight saying he is going to focus on the positives in life and not the negatives, some shit like that which he always pulls. Also, the cops will definitely find weed right? I mean he has to have a ton of it.
ps: Selena Gomez, run far, far away!

I feel like Justin Bieber is now the king of terrible looking tattoos, he is nearly a billionaire but still won’t find a good tattoo artist, I just don’t understand. He is 19 years old and has almost a full sleeve of ugly fucking tattoos. I am a’l for getting tattoos I really am, I don’t think there is anything wrong with them. If you are famous though get good looking ones! Hell if you aren’t famous get good looking ones! At least try to make them look nice!

Honestly though right now Bieber is at the top of his douche game right? He is trying to spray paint everything which he sucks at. He is showing up late to concerts, and he is getting terrible tattoos all over his body. The least he could do is try to look good right?! I mean come on bro!

Maybe after this hideous sleeve is finished he can stop getting the tattoos. Or if he does continue he can get better tattoos.

I must admit this is a celebrity feud that I cannot wait to see unravel as the year goes on because you know that it isn’t going to just end, it can’t. A long, long time ago these two used to be buddies, Justin opened up for Taylor on stadium tours and they even recorded a song together. At least Taylor said that they recorded a song together but it was never released. Hell Justin even Punk’d Taylor and there were no hard feelings! They just seemed like a couple of old pals that were going to be friends forever.

All of that changed though when Justin and Selena Gomez broke up. For people who don’t know T.Swift and SelGo are the best of friends. They braid each other’s hair, cook cookies, and are known for dancing at award shows. When SelGo was caught kissing Bieber’s cheek at the AMAs this past year it was shown that T.Swift did not approve and she simply stuck her tongue out. YUCK, she wasn’t pleased at all. Anyway after I saw that I thought it was the end of the feud, okay, they didn’t like each other. She was clearly not a fan of the on and off relationship her best friend had with Bieber and I could understand that. Being a girl you never want your BFF to end up with a douche bag.

Last weekend though Bieber released a song called All Bad and threw some major shade at Taylor Swift. Apparently he said “females like to run their mouths” and a few other things about how friends talk too much. I would quote the whole thing but I couldn’t listen to it simply because it was all bad.

I know this feud is far from over and I am beyond excited to watch it play out. Beliebers vs Swifties, who you got?!