Remember Austin Mahone? No? Well he put out that one bop “What About Love” but unfortunately after that hit there wasn’t much momentum. To be fair, he was also trying to come up when Bieber was at the top of his game, not an easy thing to do.

Well it looks like Austin is coming out with some new music and I hope this time it takes off.  Austin is really talented, he does have a really good voice and he is a babe.

Now he is 21 so it’s totally okay that I say that.

I have a feeling that Austin is going to put out mostly club music but I am positive that he tried to bring back that 90’s pop sound he started with he would blow up again!

As for Pitbull’s verse in this song? I am all set, it is gross. 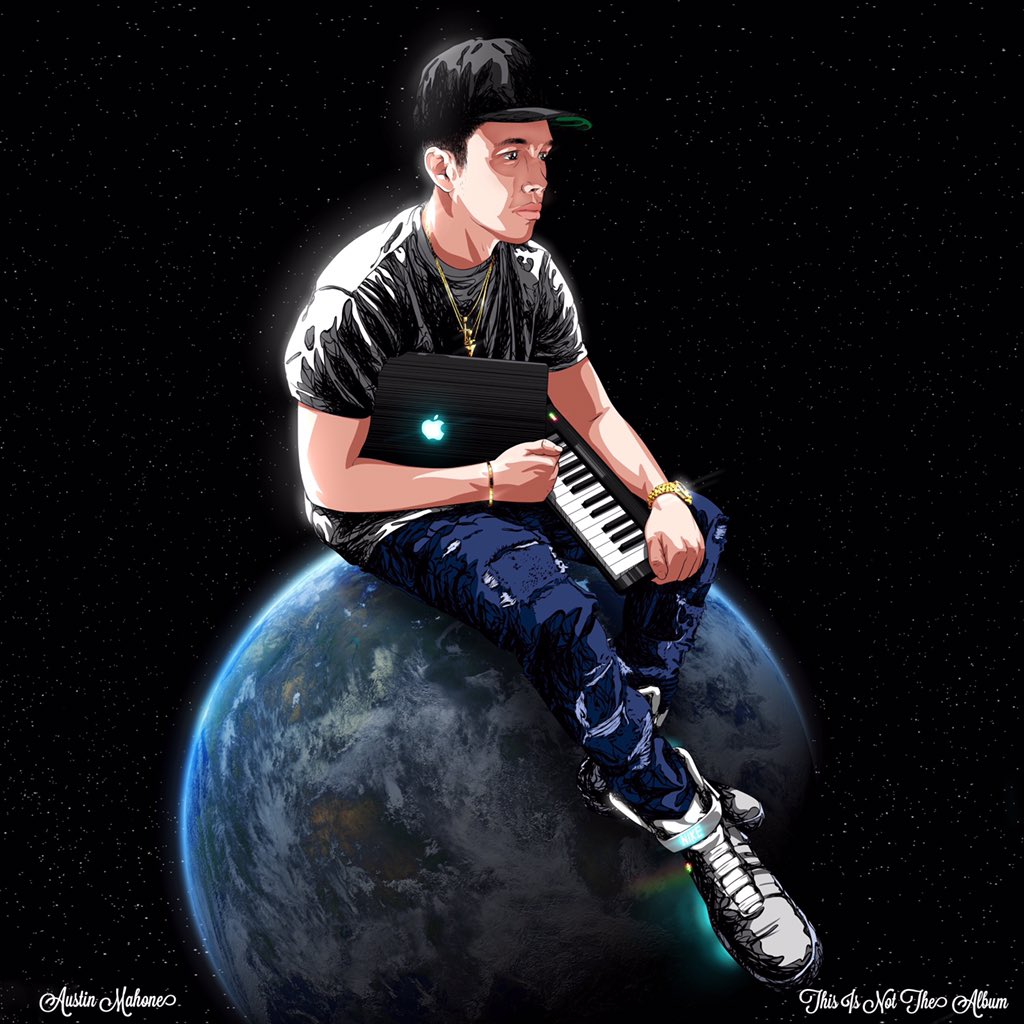 Yesterday a picture was posted of both Justin Bieber and Austin Mahone in the studio together where they were supposidly making a collaboration. Well, now it looks like two groups of fans can finally come to peace with each other. The Beliebers and Mahomies, stop the war! They are apparently friends now, just stop the fighting!

A lot of people probably see this as a way for Austin to use Bieber’s fame and get some more recognition. Not me! I don’t think that. I think that Bieber is trying to get back some of his whole some image so he decided to hit up Austin for a duet. Bieber wants to be a rapper named Bizzle but we all know that will never happen, so he needs to win back tweens. How can he do that? AUSTIN MAHONE!

Sorry Bieber your time is up, I really think that it is time to step back and let Austin Mahone take over. He has it all and you have two half sleeves of stupid tattoos.

I will say this to Austin, be careful being friends with him, Taylor did let you open up on her tour and she does hate the Biebs. Pick carefully.

May I just say that Austin Mahone looks adorable in this video, just sliding all over the place being a little dancer. Do I like the song? Nope! I think that this is one of the worst songs I have ever heard, really and truly ever heard. I don’t even understand how that is an appropriate name for any kind of song,.

I must say that this music video kind of reminded me of good ol ‘Bye Bye Bye’ with NSYNC, just because the floor was sliding around and stuff. They could have done a lot more with this video though. I do believe that one. I give it a solid C.

P.S.- Will Austin Mahone ever come out with a cd? Just curious.

Taylor Swift is all about making love connections — even when they’re not for her! As revealed in the new issue of Us Weekly, the “I Knew You Were Trouble” songstress, 24, opened her little black book for Selena Gomez and plucked out a very well-known name: Austin Mahone.

After setting her BFF up with Ed Sheeran last summer, Swift played matchmaker for the “Come and Get It” singer, 21, and the “Say Something” sensation, 17, who opened for her on tour. “They’re seeing each other,” a source tells Us of the Texas-born star and Gomez.

For now, though, they’re keeping the romance relatively quiet. Leaving the Beats Music concert on Jan. 24, they “sneaked out separately,” a second source shares, “then got in the same car!”

Gomez — whose most high-profile relationship to date was with fellow pop superstar Justin Bieber — recently spoke with Seventeen magazine about what she’s looking for in a boyfriend. Having gone through what she called a “really bad breakup” with Bieber, she needed time to figure out what she wants. But now she knows she’s ready.

“I actually talked to Katy Perry about guys who are intimidated by strong girls,” she said. “I haven’t found someone yet who could understand my lifestyle, support it, love me through it, and not be threatened by it. It’s hard. I do think I might scare some guys, because I’m like, ‘I want to change the world! I have dreams! What do you want to do?’ But I only know how to be me.”

Read more: http://www.usmagazine.com/celebrity-news/news/selena-gomez-seeing-austin-mahone-set-up-by-taylor-swift-2014291#ixzz2rou3hhFs
Follow us: @usweekly on Twitter | usweekly on Facebook
Can you imagine if this is in fact true? What is Bieber going to do that she has moved on to the next biggest thing? Do I think that Austin Mahone will ever hit Bieber status? Honestly, no I don’t but maybe that will give him longevity rather than a short fame lifespan like it did to Bieber who is currently famous for all the wrong reasons.
So there are a couple things I don’t believe about this whole new alleged couple and number one, the source is US Weekly, let’s be honest they are not exactly the most reputable magazine in the world. The second thing is that Selena has already dipped into the kiddie pool for dating once and it didn’t exactly end well. In fact it ended with her laughing about making Bieber cry, to getting back with him, to breaking up, then so on and so forth. Does she really want to go through that again?
Selena Gomez is 21 years old, she shouldn’t date someone who is only 17 years old. No matter how “mature” he is, it is fucking weird. Gomez you have no reason to date someone that much younger than you even if they are a better looking version of your ex-boyfriend!
Also fucking Taylor Swift right? You know that she wants to date Mahone but knows how frowned upon it would be to do so, so instead she puts her best friend with him. If this is true you know she is asking Selena what Mahone is like in bed and everything. Living vicariously through Selena Gomez will be Taylor’s new pass time.

So I guess that I am like 3 days behind with this release but I had a Grammy’s hangover so I was trying to get over that. Anyway, Austin Mahone is just going to keep banging out hits and not have a CD, that is what is going to happen. He isn’t even going to release a damn CD and jsut keep blowing up the charts with bangers like this song.

Let’s be honest is this the best song in the world? No! Pitbull is in it! Whatever he touches I pretty much run the opposite way but Austin did a great job saving it, he knows what he is doing and I like it. I can’t wait for the music video honestly.

Pitbull needs to go away though. He talks about the band KrissKross who people who like Austin Mahone are too young to even know who they are. At lease stay relevant with your references please you old man. You also shouldn’t be checking out people that Mr.Mahone is because obviously they will be far too young for you! Ya lil creep!

Well now that Bieber is out for good Austin Mahone has stepped up big time, and he knows it. Tonight this is how he rolled up to the Grammy’s look at him. Look at that big grin, look at how happy he is because he knows, he is aware that he just won the rivalry between him and Bieber. Honestly, I don’t know if there was a rivalry but it is over now!

Look at him with his little pushed back hair, no more shaggy hair for him! He is almost 18, he is a grown ass man! Well almost….In a few months he will be 18, so that is a good thing! I wont feel as creepy whenever I write about him. I now understand the count down when the Olsen twins were turning 18.

He is my absolute favorite cougar bait and guess what, I don’t feel ashamed! He just released that song with Pitbull and now here he is smiling on the Grammy’s red carpet.

If you follow my blog you know how much I love little Austin Mahone, my favorite little cougar bait that I just love. I think that his music and fun and that he is adorable, two things which just capture my heart. Pitbull on the other hand, he is terrifying, absolutely scary to look at without his glasses and he looks like he could be old enough to be Austin Mahone’s father. I guess he knows that he needs young talent in order to promote songs since he cannot sell a single on his own if his life depended on it. Just sayin!

There is one thing that bothers me about this song already. I mean look at the title…Remember when songs actually had titles that meant something? Austin first you had ‘Banga Banga’ and I don’t even know what the means. Now you have a song with a noise and a response to basically any answer? Yeah, You need to go back to your ‘What About Love’ days and bring back the happy pop boy I grew to love!

Anyway this song will probably be amazing and I will jam to it daily. Can you believe this little Austin Mahone doesn’t even have an album out yet and he is doing big things? Crazy town right there.

My beautiful younger man Austin Mahone has a new song called “Banga Banga” and I don’t hate it. I mean it isn’t the greatest song in the world but I can respect it. Plus look at how beautiful he looks in this video. This video has everything that a pop song should have. It has dancing, a skate park, and a jeep. It is like the 90’s music videos all together. It kind of reminds me of the “Summer Girls” video by LFO, no? Yes.

One of the many reasons I like him is that he doesn’t try too hard. He just has fun, Bieber on the other hand tries way too hard. I could do without the weird Neyo rapper looking dude though.