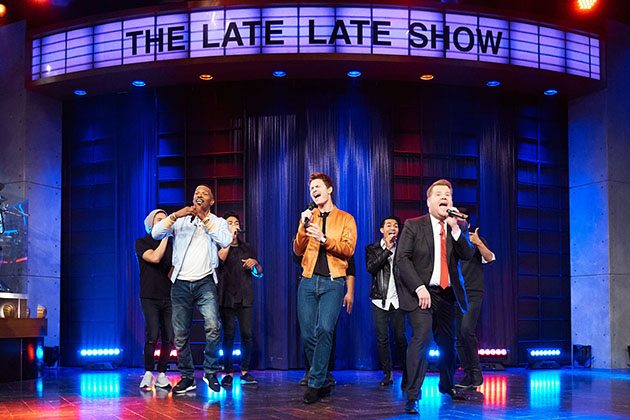 Last night James Corden reminded us again why he is one of the best in late night.

During his opening, talking about dogs and sunglasses, Jamie Foxx stood up and challenged him to a riff-off.

Before I got any further, Jamie Foxx is looking better than ever and if Katie Holmes has been secretly dating him for like four years, good for her.

The two of them went back and forth a bit with singing and then Ansel Elgort stepped up on stage. Now, I knew that Ansel could sing but I don’t think many people are aware of his voice. Well he went up there and absolutely killed it.

At the end they all sang together like a bit happy family and it was perfect.

Do not sleep on Ansel Elgort! Do you hear me? He is one of the most talented people in young Hollywood and he is going to blow your mind!

Really though, Ansel is the complete and total package. He can sing, he can dance, and he is an amazing actor. Oh and he can play piano, so that’s another check on his talent list.

Today on Instagram he posted himself doing a little cover of “City Of Stars” from the box office smash movie ‘La La Land’.

Don’t tell Ryan but I like Ansel singing it better.

I swear to god, Ansel Elgort doesn’t get enough credit for how talented he is. He can sing, he can dance, and he is one hell of an actor. I am pretty sure that he is going to be around for a very long time. With the talent that he has, you can’t ignore it.

Most people forget about Ansel’s singing ability though. A few days ago he took to Instagram to post a cover of him singing Niall Horan‘s hit song “This Town” and he absolutely crushes it.

He has a new single coming out called “Thief” too which will probably be an absolute hit.

Check out his cover below!

So fun fact, Ansel Elgort can do it all. No really, he can. He can sing, act, dance, and produce his own music. I mean that’s talent if you ask me. His latest track ‘Home Alone’ just proves that he is a serious talent, that we should all acknowledge.

So when is he going to release an EP? Hopefully soon. I am into his sound and I can’t wait to hear more!

My take of Shawn Mendes – Treat You Better Wanted to make an emotional piano version with some new chords 🙂 In other news I'm putting Home Alone up on soundcloud next week with a official release later this month.

I will be the first to admit it, I am obsessed with Ansel Elgort and it’s probably weird because I am quite a few years older than him. I just think that he is absolutely adorable and extremely talented. He will absolutely be one of the biggest names out there in ten years, I say ten because I like to give people time to grow. Obviously Ansel has been in “The Fault in Our Stars” or “Divergent” series, but I think that he has a lot more to give.

Word on the street is that he is going to be releasing some of his own music soon as well! I genuinely like this cover a lot, slowed down, more emotional, pretty amazing.

His first official single ‘Home Alone’ will be out later this month according to his Twitter too!

Let’s go Ansel, you have an extremely bright future ahead of you!

The Star Wars film which will focus on the backstory of Han Solo has narrowed down its search from thousands of actors to only a handful!

According to reports the film won’t even start filming until 2017 so they have a whole year to prep but the film.

Ansel is apparently a front runner and he should be. Not only does he slightly resemble a young Harrison Ford, he is also a great actor. I believe that he will be one of the biggest actors of the younger generation. He would be my first choice for this project.

Logan is another young actor who is probably going to do big things. Logan tends to go for more indie type roles, other than his Percy Jackson movies, he tends to stay away from the big movies. Fury was huge of course but it was more of a gritty drama. I can’t imagine him taking a role like this.

Scott and Harrison look nothing a like but Scott is a total babe. Honestly even though I am not a huge fan of Star Wars if Scott was in it, I would watch it. Even though I have never seen him act he landed a leading role in a Ben Affleck movie, so he has to have something going for him.

Not my first choice but I could see why Miles would make sense. He is a bit older than Logan and Ansel but he can play a smart ass role. I know Han is like a badass smart ass type of guy, so it could work.

Uh, why is Dave in the running? I get it he is adorable to most people or whatever but he is tiny. I couldn’t imagine him being an action star. Maybe he could surprise everyone though?

There are a few other people in the running but those are the biggest names on the list. The other ones some how snuck into the list.

So what do you think? Let me know!

There are no guest bloggers for this post, just my own opinions! I think that I can tell if a man looks good in a suit, so I didn’t need any help with this! Now last night most men showed up wearing a black and white tux of some type. I did notice more bow-ties than usual, and I can’t stand bow-ties. Some people could pull them off while others fell short.

Let’s see who made us swoon the most this year!

This is probably a weird pick but I think that JK was killing it on the red carpet last night! Look at his swagger! He has a chain, a hat, his pocket square matches his wife’s dress. I love it, everything about it.

Have mercy! Am I right? I mean what in the world is John Stamos doing at the Oscars, that is something I don’t know. I do know that he showed up looking as handsome as ever! I love the red pocket square to give the suit a bit of color as well. I have some to the conclusion that John Stamos will forever be attractive, this is just another photo of him on a red carpet to prove my case.

Last night Ansel Elgort was a presenter but to be honest, I think that one day he could be nominated. I believe that he is right up there when it comes to actors of the future. I like that he went with dark blue, he is young, so he should have a little bit of fun with his outfit. The bow-tie is a little off, but hey, we can straighten that right up!

Let’s be honest, does John Legend ever look bad? I mean the suit fits him perfect, his hair is cut perfect, his face is perfect. John always looks incredible, the Oscars wasn’t any different.

Miles Teller is just so handsome, am I right? He reminds me of a young Vince Vaughn, everything about him does actually. Although this picture doesn’t do it justice the suit was actually a very dark navy blue which looked great on him! I don’t love how the sleeves are cuffed or how tight the pants are. I will say that some how he pulls this off though. As I said about Ansel, I do believe that we will be seeing a lot more of Miles in the future.

To be totally honest even though they said David’s last name a million times, I can still not sure how to say it. I love the cranberry suit though, I love it a lot actually. I like when people take a chance on a different color, I think that it shows a lot of courage considering most people want the Oscars to be simply black and white attire, very proper. Looking good David!

Let’s be real who doesn’t love seeing Chris Evans in a perfectly tailored suit, am I right? This is perfectly fit to his body, he looks incredible. I love the scruff and his blue eyes. There’s not much else to say!

Eddie killed it the entire awards season! He won award after award, and he always looked good on the red carpet! Last night was no different! I must say, I wasn’t aware that his legs were so long, is that an odd thing to notice? This picture doesn’t show it but he also had a nice accent piece in a watch. Congrats on your big win Eddie and congrats on looking so good!

The man of the hour gets the number two stop! I must say, I don’t love David’s suit, he kind of looks like a waiter, but Neil looks great! I love the charcoal suits, I always have and I always will! He also did an incredible job hosting the show, so bravo to him!

I love everything about Michael’s look, I genuinely think that he looks incredible. The black accents on the suit, the dark gray color of the suit. He is just killing it. Honestly, who would have thought that a former NFL player would win the red carpet for the Oscars? Not me, but I am glad he did!

I have some ideas that Ansel Elgort is going to be one of the biggest actors within the next five years. I like to think that for leading men it will be between him, Logan Lerman, and Miles Teller, just wait and see. For a while I have found Ansel pretty adorable but lately there has been a lot more press on him and well I am liking what I see. He seems like such a down to earth guy plus he killed it in ‘The Fault In Our Stars’ plus his new movie ‘Men, Women, and Children’ looks like it will be incredible as well.

Just so you all know Ansel is a solid 20 years old so he is totally legal which makes this post not completely creepy, only slightly.

If you look at those little doe eyes, pouty lips, and perfect nose and you don’t swoon, I don’t understand you at all!

Hope you have a great Monday and Ansel put a smile on your face!

PS. Remember what I said about him being one of the biggest male leads within the next five years, it is going to happen. He can do drama, comedy, and he even did an action movie, so yeah he can do it all..