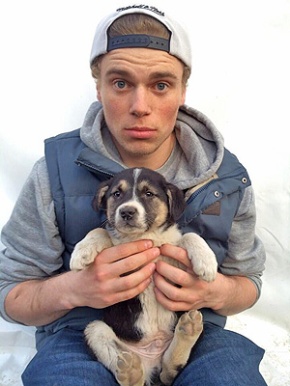 Yahoo – A day before he won silver in a historic American podium sweep in slopestyle skiing, Olympic skier Gus Kenworthy arranged plans to adopt a family of stray dogs he found in Sochi. The dogs have been a big story throughout the Olympics. The Russian government hired a firm to poison the strays before the games. That was met with a serious backlash, and a Russian billionaire set a plan in motion to save as many dogs as possible. Kenworthy is doing his part to make sure the dogs find a suitable home. Here are the dogs he found near in the media center in the mountain village, according to USA Today: USA Today’s Rachel Axon that he’s serious about adopting them and bringing them back to the U.S., where he already has owners lined up. Kenworthy has already arranged for kennels and is trying to get them vaccinated on Monday. Getting the puppies on a plane is not difficult, he said, because he can put two to a kennel. Bringing their mother might be harder because of different requirements for adult dogs.’I’m trying,’ he said. ‘I’m doing what I can.’” Well Gus Kenworthy is now officially my favorite Olympian.

So let’s be real right now, Gus Kensworthy is the hottest story of the Olympics right now, right? I mean I haven’t watched even one second of the games and I heard about this guy. I am not exactly sure what he does or anything like that but now I know one thing. I want him to get a medal in every single race he is in.

I also think it is a well known fact that all these Olympians living in these condos all sleep together. You can say that they don’t but they do, everyone knows it. Can you imagine how much action this guy is going to be getting? Now only is he good looking but he just rescued a bunch of puppies. Ladies love puppies!

On a more serious note, I was sick to my stomach hearing about Sochi poisoning all their stray dogs, it really disgusted me. It is nice someone was able to step up and help out some pooches like they deserve to be helped out.

Gold medal for you in my book Gus Kenworthy!