Hey everyone! We are so happy to be back guest blogging for Celebrities Are Tragic! This is always such a fun thing for us to do and we love the fashion of any award show, but something about The Academy Awards is just so magical.  We were surprised this year by the lack of dresses that we loved. There were plenty of ones we didn’t like but we like to spread fashion positivity  because those women felt beautiful, so who are we to tell them they’re not?!  We kinda wanted to do a best dressed after party list because that is where the fashion was! We did include on look from an after party so keep on reading to check who made the list! Congrats to all the beautiful ladies who were nominated and who won! As always feel free to follow us on twitter! Thanks Willi Killiams! 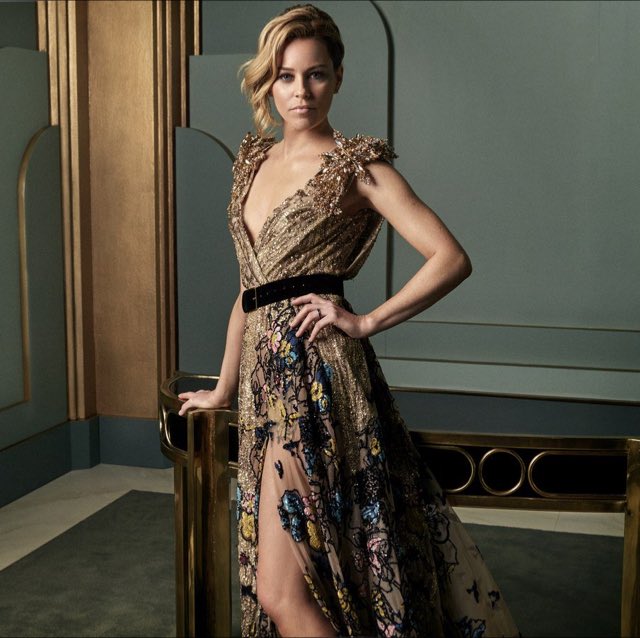 We decided to add in an after party look because we honestly didn’t have many favorites this year, which is shocking because usually everyone brings it! But when we saw this dress we had to give it a shout out! This was the perfect party dress to show up in.  We loved the gold color with all the butterfly and flower appliques looked like they were floating on her dress. It was the perfect combination of fun and sexy.  We loved the shoulder detail and black belt. We were so happy she wore her hair up because when you have a dress like this, you don’t want to take away from it. Overall she nailed it! Best After party dress for sure goes to Elizabeth. 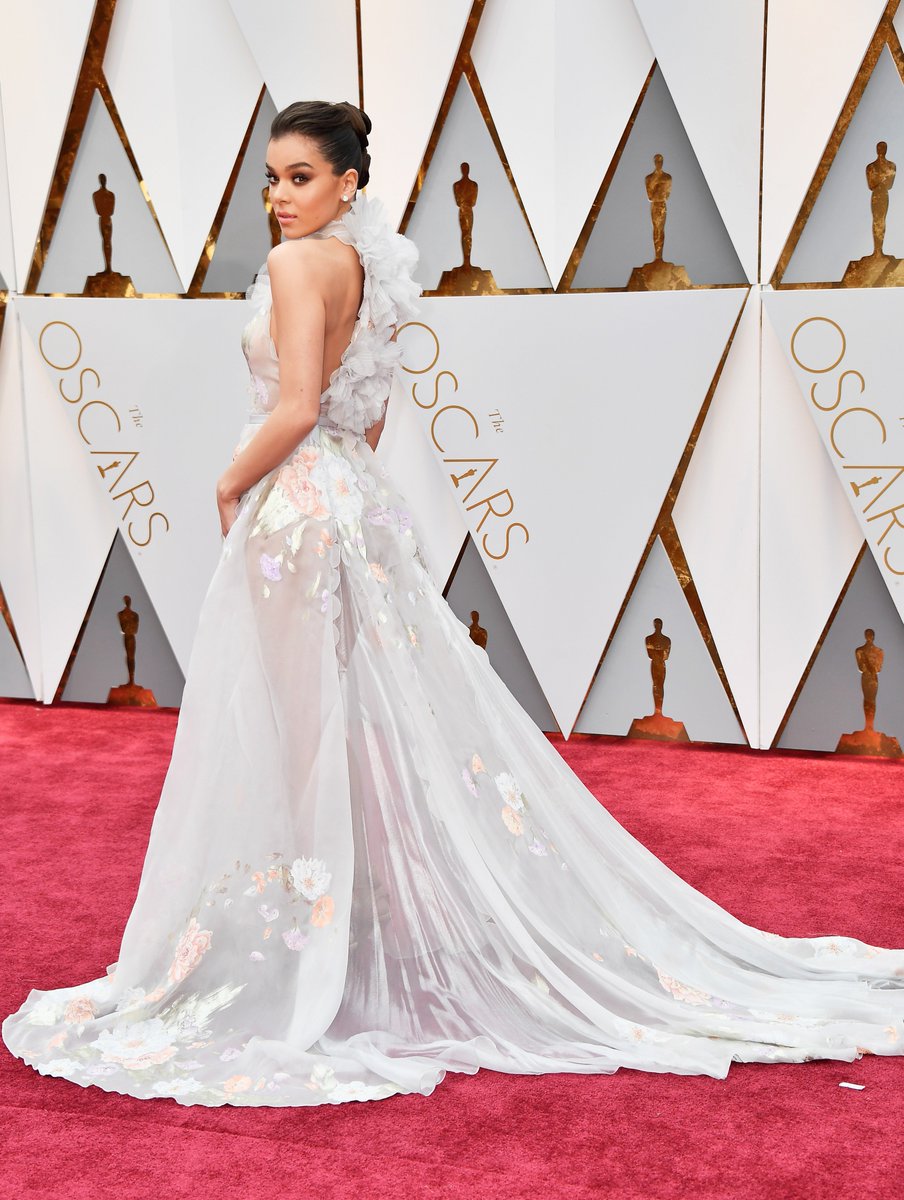 This dress was so elegant and girly. We were obsessed from the moment we saw it! Her designers had a painter flown in to hand paint the dress while she was in it so the flowers could all be appropriately placed because the fabric was so sheer. That is couture! Her Smokey eye was beautiful and brought the drama. We loved that she kept her hair up to show off the high neckline of the dress. 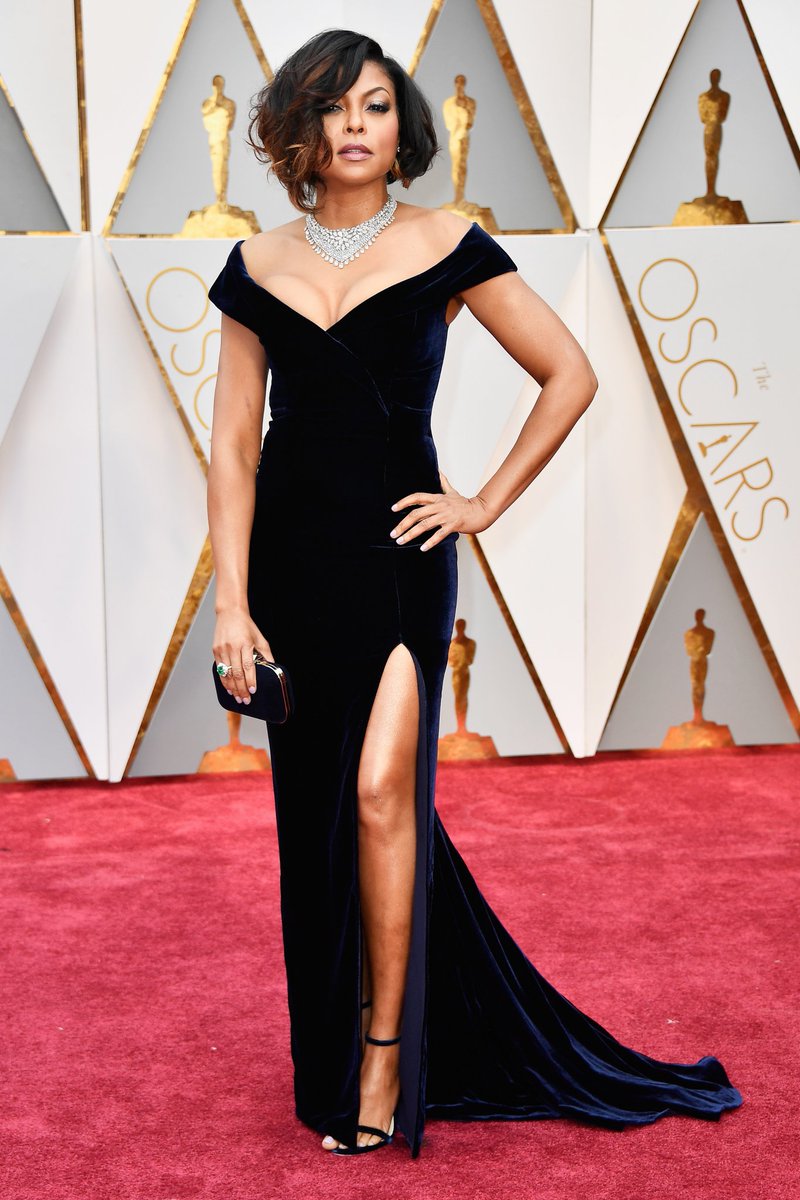 She brought the sexy to the red carpet! Everything from the silhouette to the neckline was stunning. It looked black on TV and pictures but it was actually a deep navy blue.  We loved the simple shoes because her necklace was so extravagant. We also loved that she did a bob hairstyle to show off the deep v-neckline and necklace. Loved it! 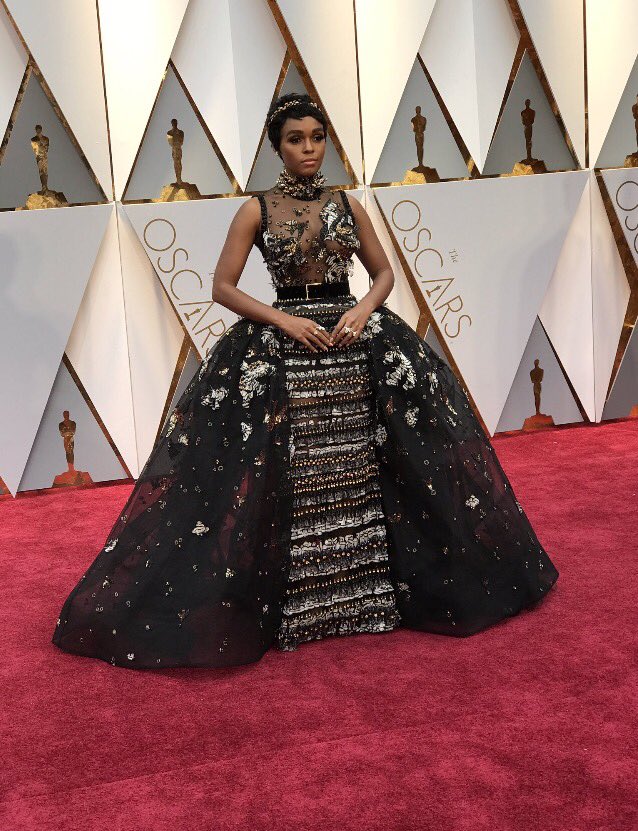 This dress will go down as one of the most iconic Oscar dresses in history. She looked like a regal queen floating on the red carpet. There was so much detail in this dress. We loved the bodice, it was totally giving us Halle Berry  vibes circa 2002 when she won her Oscar. The sheer fabric with the lace beaded appliques were stunning. Hair and makeup was on point! She has dream eyebrows that we all want! 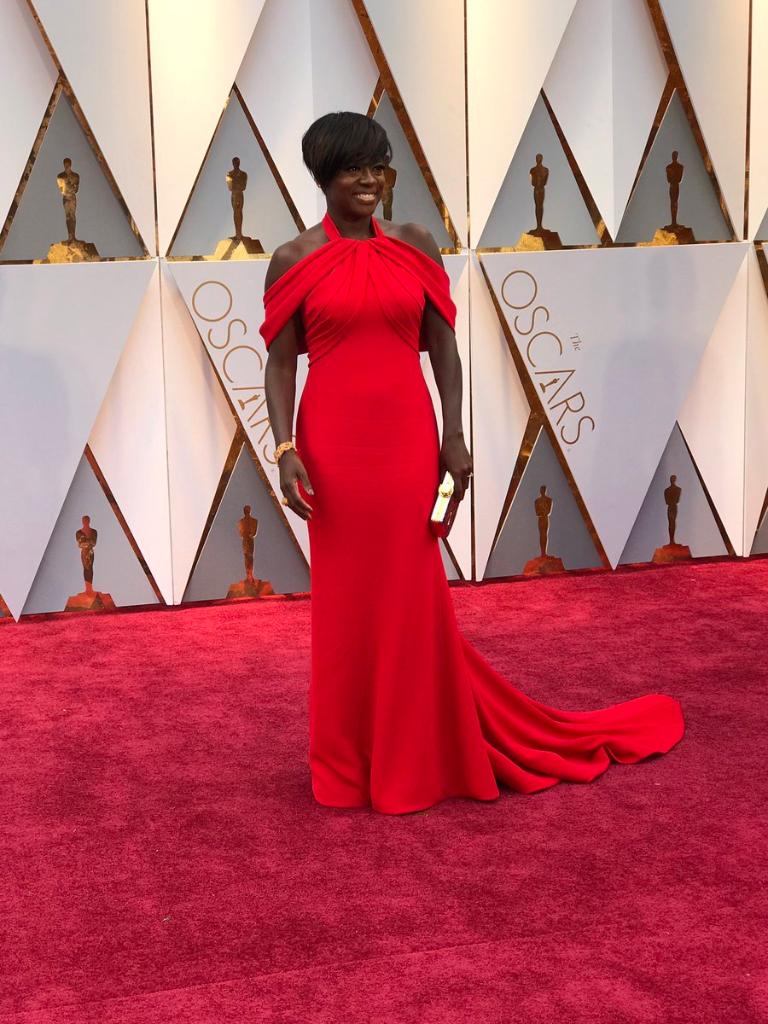 SO beautiful. Everything about this dress was amazing. The silhouette, the color, the neck line. Just perfection! Her hair and makeup was flawless. This was a dress to win in! Aside from looks, her speech was so inspiring and she moved us to tears! Congrats Viola, we love ya! 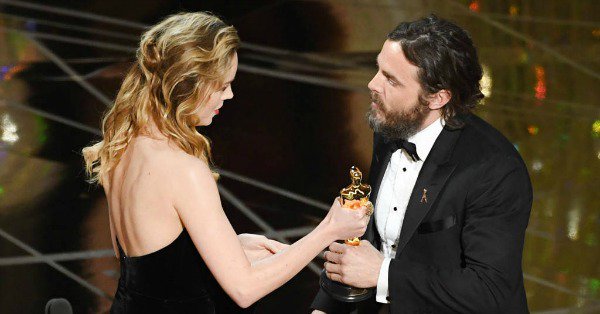 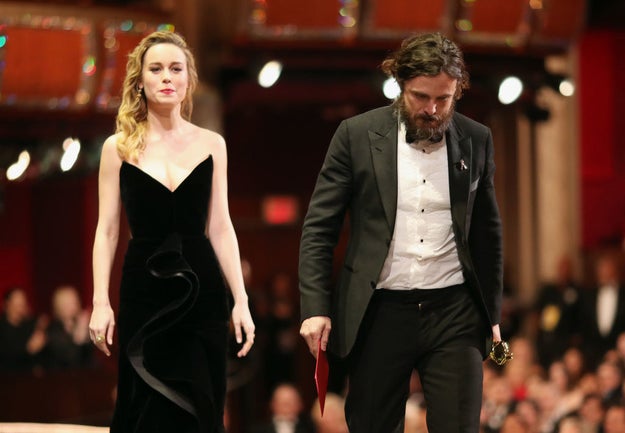 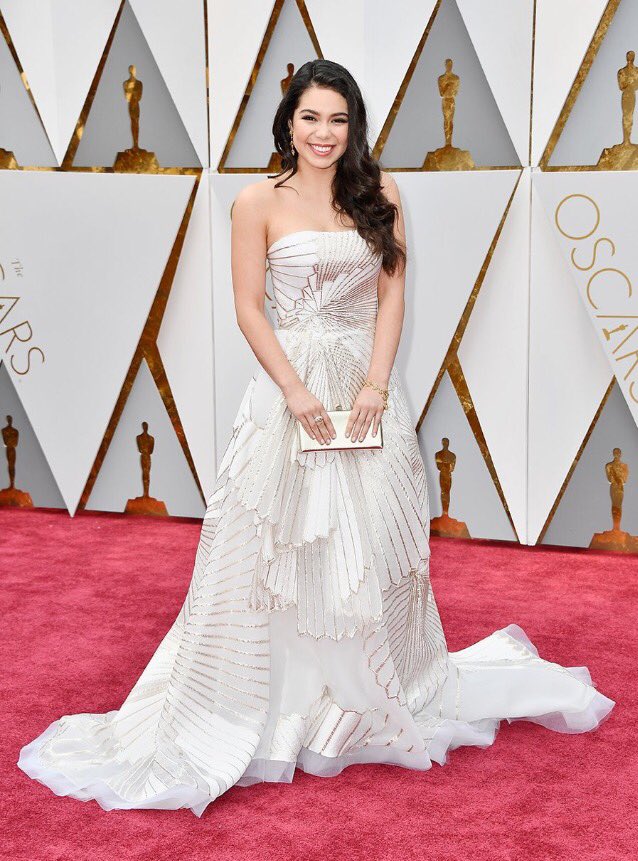 If you didn’t know who Auli’i Cravalho was before, you definitely know who she is now. Last night she teamed up with Lin-Manuel to sing a song from the their hit Disney movie ‘Moana’.

Did I mention that Auli’i is only 16? This girl took the stage like a damn pro and performed better than some seasoned performers I have seen. It was something out of this world, that’s for sure.

Hell she got hit in the head with a flag and didn’t even flinch!

Check out the performance below!

She also posted this photo on Twitter later in the night. How does a 16 year old top performing at the Oscars? Maybe one day she will be up there winning an Oscar, that would be something incredible.

I have on request, please don’t give this girl her own show on Nick or Disney, she deserves better. 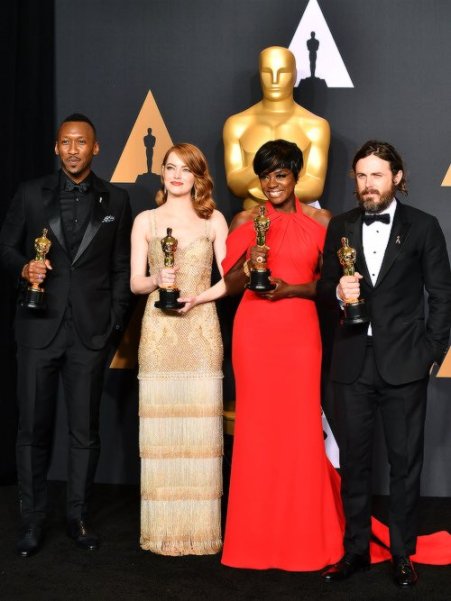 Whether you call it the Oscars or the Academy Awards, I think that we can all agree that winning the award is an amazing honor.

Here are all of the winners from last night!

Costume Design: Colleen Atwood, “Fantastic Beasts and Where to Find Them.” 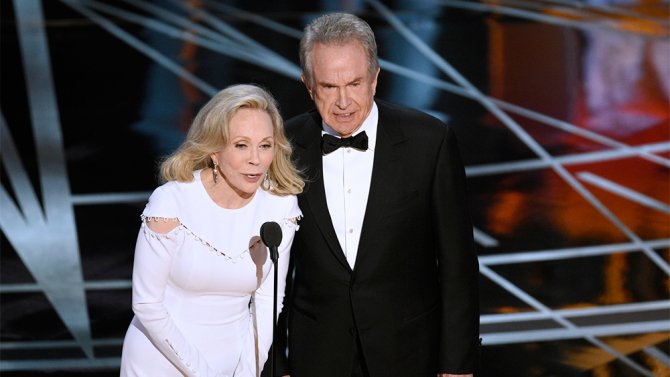 All that I can say is damn, the Oscars as good. This year the show ran super long and started a half hour later than usual so they needed a solid viral moment. Sure having Justin Timberlake perform, having candy fall from the ceiling, those are all good moments, but not great moments.

So how do they make a viral Monday morning moment?

They hand Warren Beatty the wrong card for Best Picture and chaos ensues.

He stood there for a moment and looked at the card then announced that ‘La La Land’ had won Best Picture, but about halfway way through that acceptance speech, it was announced that ‘Moonlight’ had actually won.

The moment was a mess and very Steve Harvey of them to try and pull off. I feel like if they wanted to make a move like that they should have waited at least another year so the Steve Harvey incident wasn’t so fresh in our minds!

This is such a smart marketing move. Again a lot of people probably tuned out because it’s past midnight and most people have to work on Monday, so adding this will make for great water cooler conversation as some call it.

‘Moonlight’ definitely deserved to win, but the producers of this show didn’t need to have it be so dramatic.

Now they will have a viral video of it all happening, it will be the most talked about thing on social media, and all of the entertainment outlets will talk about this moment for the rest of the week. That is a promise.

You aren’t fooling me with this one Oscars! I am onto you and your somewhat smart marketing!

I never thought I would be attracted to a man who wears blue velvet but here I am. Dwayne Johnson looks fucking incredible. Maybe I am bias though because I am pretty sure Dwayne is in my top five hottest guys in Hollywood. He could have worn pretty much anything and I would say that he looks incredible.

Really though, I heard that Velvet is very much in this award season which is weird. I need to break out all of my velvet track suits I guess. Of course by all of them, I mean none because I don’t own any.

Dwayne can basically do no wrong in my eyes though. That smile, those muscles, his charming personality? He could probably convince me to join a cult if he was a cult leader. No he could definitely convince me.

Congrats on being super talented and being a total babe Dwayne Johnson. Thanks for always looking handsome.

There’s a reason he was voted sexiest man alive.

Ryan Gosling, what is happening? You are usually one of the best looking guys on the red carpet. I mean his face and hair and all of that looks incredible, those ruffles though? I don’t think that anyone could pull that off. Ruffles have never been sexy.

Tonight Ryan is nominated for his role in ‘La La Land’, so we will see if he brings home the trophy tonight!

Like I said everything is on point but those god awful ruffles.

Apparently Twitter is all about the ruffles though, so what do I know anyway?

She is rocking a velvet dress, and apparently velvet is very much in this season. I had no idea that velvet would ever be a fashionable choice, it looks like it’s time to breka out those Juicy sweatsuits!

Taraji isn’t nominated for her personal performance tonight but ‘Hidden Figures’ is but I am hoping that it is able to pull out the big win. It would be awesome.

Just a little fun fact, Taraji is one of my favorite celebrities because once time she was drunk at the Super Bowl and posted on Instagram about how much she loved Maroon 5, but it was Coldplay performing. That’s my girl right there!

Slay Taraji, we are not worthy. 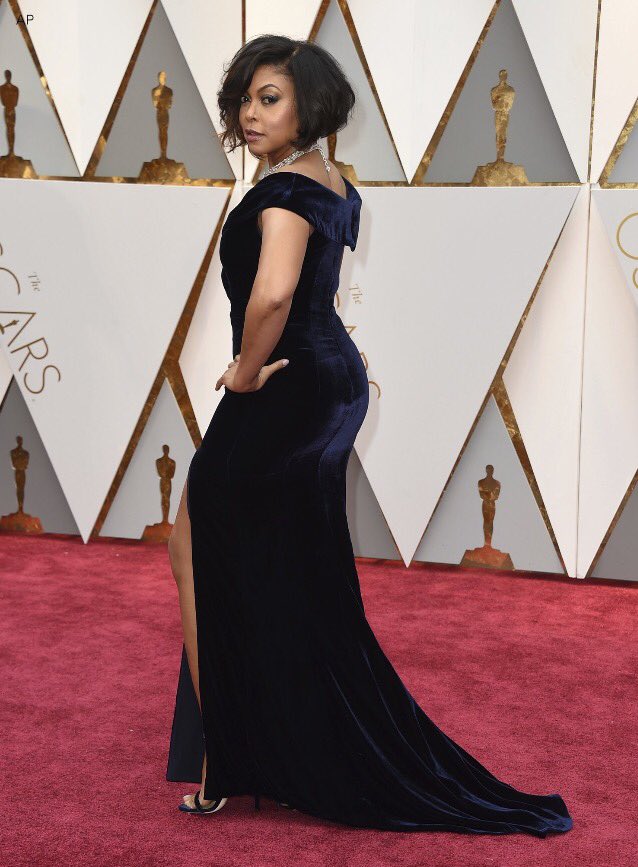 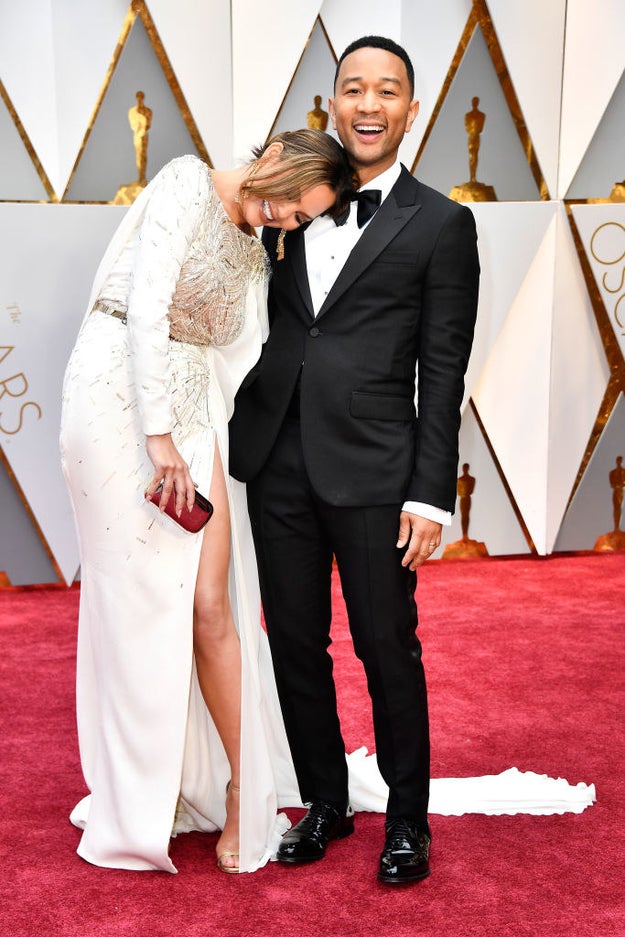 Is there any couple that rocks a red carpet like John Legend and Chrissy Teigen? I am seriously asking because I don’t think that there is. Sure there are couples that look great but these two just slay every red carpet that they walk.

John has won an Oscar before for Best Song in a Motion Picture, and I think that he is performing tonight. I could be wrong.

Anyway, just look at these two. I am obsessed with them and so is the rest of Twitter.

So in case you were wondering if Hollywood love is real, just look at these two. 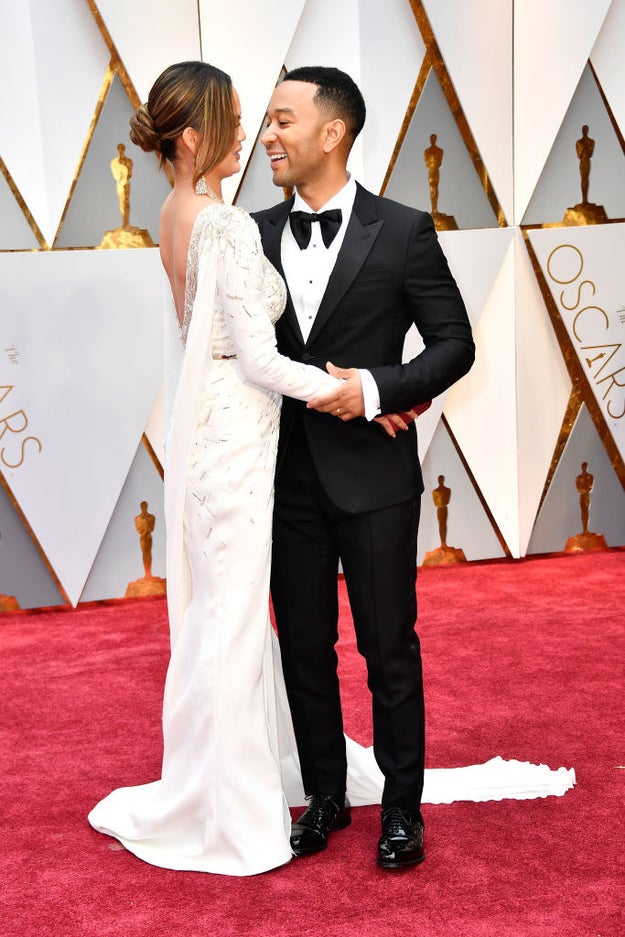 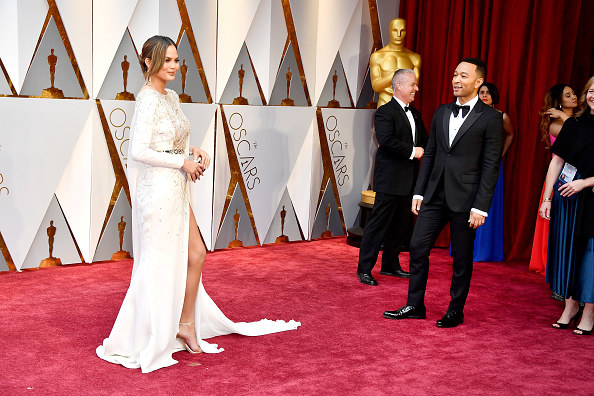 I want that John and Chrissy kind of love. 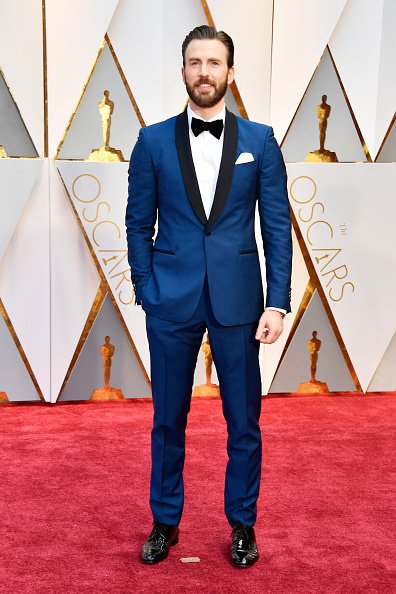 When Chris Evans isn’t being the perfect human, like getting into Twitter wards with a former KKK leader, he is walking the red carpet. That’s right. He is basically always a hero for the people and that is something I will forever respect.

Most guys at the Oscars will wear a simple black tux, it will be fitted perfectly and all of that stuff but rarely do you see color. I give Chris a lot of credit hear for wearing some color.

Let’s be real, he isn’t stupid. He knew that wearing blue would bring out those baby blue eyes.