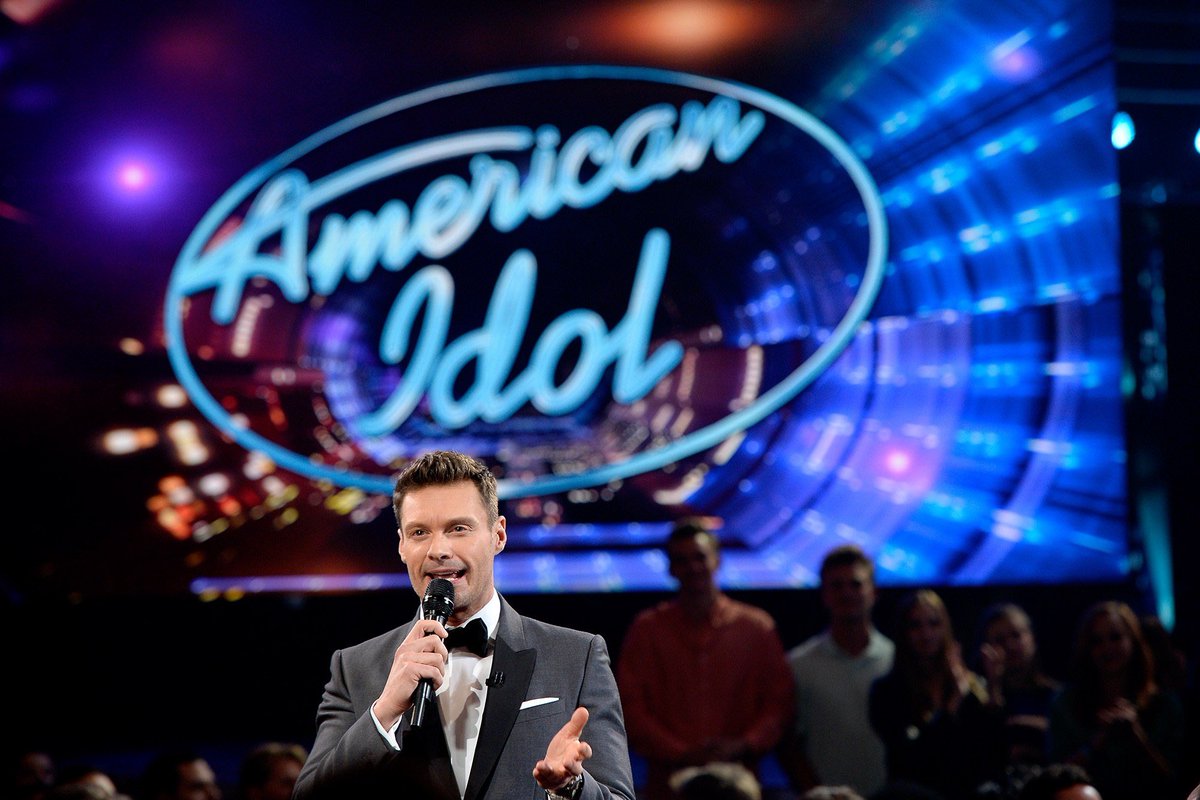 So I only have one question, why? Why in the actual fuck is ‘American Idol’ coming back at all? This show ran it’s course.

Listen, I understand the pop culture influence that this show had, there’s no question about that. I mean, Ryan Seacrest literally taught us how to type out a text in order to vote for our favorite.

So far there is no real information about the show or about who the host would be. I wouldn’t be surprised if Ryan took back the role of host.

This is just a waste in my opinion, there’s no reason to ever renew this show. Let it rest in peace.

I am going to decide something right now. Jimmy Kimmel should host everything. He is just a little bit mean but is hysterical. That is something I never understood. People have always said that Jimmy Kimmel is mean to his guests. He simply asks them questions to make them think, or be slightly uncomfortable. It is better than just sitting there and laughing like Jimmy Fallon does with all of his guests.

Last night he did great with the Emmys though! I think this was the first time I was actually entertained through out an entire show. So good job Emmys!

His opening monologue absolutely killed me too. I thought that it was perfect, and everyone was laughing or uncomfortable, the way that it should be.

So here, I have decided that all award shows will be hosted by Jimmy Kimmel or Tina and Amy, no other choices. Okay? Okay.

So can Jewel and Tori Kelly just team up and record a full album together? Please. That is all I need in my life, just a nice little duet album for all of our listening pleasure.

I think I am going to watch this “Greatest Hits” show on ABC, seems like a show I would be into because I am all about nostalgic music. Having Hanson, Jewel, and the Backstreet Boys in one episode? ABC is trying to slay me!

Nostalgia, isn’t it the best? Listening to a song that can bring you back to a specific moment of happiness? Welcome in ‘MMMBop’ one of the boppiest tunes of all time. Just three brothers with long blonde hair jamming away.

The craziest thing is that Hanson actually has talent. They can sing and play instruments, and guys? They really should have been around longer!

I wonder how much they hate this song though, they have to hate it at least a little bit, right?

Well last night the boys came together for ABC’s greatest hits, some summer time special show where singers now duet with singers from the 90’s. Nostalgia is hot right now, so I don’t blame them one bit for cashing in!

Last night Callie Torres scrubbed in for the last time and that is absolutely heartbreaking, am I right? There aren’t many original characters left on Grey’s Anatomy, and as a long time viewer I think I can speak on everyone’s behalf when I say that we hold those long time characters near and dear to our hearts. Callie may have come in during season 2, but again, looking at the cast now she is basically one of the last OG’s of the series.

Callie Torres opened up the doors to a conversation that was interesting. She was a bisexual woman, who fell in love with O’Malley, they got divorced, she then fell in love with Arizona, but also hooked up with Mark Sloan, but her love life wasn’t the only interesting thing about her. The character of Callie was complex, and she was a badass, that simple.

If I was to define Callie Torres she would be a badass surgeon who could run with the boys and a character who had a big heart. That was something that I believe Sara Ramirez did perfectly, showed vulnerability.

Personally I do think that Shonda ruined her character just a little bit in the last few episodes of this past season. She made Callie act totally out of character and be selfish. I will thank Shonda for not killing Callie, I mean that means she could potentially come back for the series finale. She just ruined her character a bit before the send off. The send off, which by the way, was fucking horrible. Callie only had about three lines the entire episode, she deserved much more than that. Again that is my opinion but it seems like Twitter agrees.

Both Shonda and Sara put out statements.

Now let me have my moment while I gently weep that Callie is gone, but celebrate that she wasn’t killed off.

@haydenpanettier AND I GETTING A LITTLE “CRAZY” ON SET AT @Nashville_ABC YOU WONT WANT TO MISS THIS……#PATSYCLINE,

Oh hell yeah! I can get behind the guest star. Steven Tyler is absolutely incredible. He is such a nice guy and considering he almost died due to drugs, he has made a serious comeback.

‘Nashville’ is one of my favorite shows and knowing that he is going to be on it makes it that much better. Let’s be real, don’t we all love a good night time soap opera every now and then?

Here’s to hoping this seasons of ‘Nashville’ moves faster than the last.

So ‘Rising Star’ is going to be a new reality singing competition on ABC which premiers on June 22nd and I just saw the first trailer for it. What do I think about it? I don’t even understand it. I mean I guess I do. The singers are preforming in real time and they start off on a stage with a wall surrounding them. Then people vote in real time and if they get enough votes, the wall rises, pretty simple.

What is the point of this show though? It kind of reminds me how in Gladiator when the king would do thumbs up or thumbs down to kill someone or keep them alive. Strange, right?

Also what do Josh Groban, Ludacris, Kesha, and Brad Paisley have to do with any of this? I mean they made it clear that they are not the judges. They say it multiple times through out the little commercial that I posted above. So what do they do? Also what happens to the people that win? Are there more rounds?

So many questions, so few answers! Maybe I will check out the first episode to see what it is about but I don’t think I am going to be about this ‘Rising Star’ life no matter how much I love Ludacris and Kesha. I think that ‘The Voice’ is where it is going to be at for the next few years anyway.

Will you tune into this show?

You know, I really didn’t see this coming, I really didn’t. I completely forgot that they always keep the first person a secret so hell, I thought that I knew all of the people! Surprise, I was wrong! Barbara is all about having Hillary run for President and I think that would be pretty cool. I think that it is time for a woman President just to make sure that everything happened. She is saying that her hardest times were her personal times, losing her parents. She didn’t talk about the whole Bill Clinton getting head in the Oval Office which kind of sucked right? I mean that must have been absolutely terrible for her, she needs to really open up about that shit!

I don’t pay too much attention to politics, I think that our country is fucked no matter what. Anyway, I like the way that Hillary holds herself, she is very professional and I love that. Hillary is a strong woman and it is important to have strong women in the media.