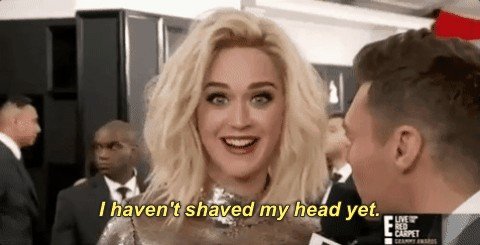 Listen here, I know that there are memes out there about Britney‘s 2007 break down that the media was so kind to follow step by step. People still makes jokes about it but aren’t we past that? It was ten fucking years ago and it was clear that she had an undiagnosed mental illness at the time.

Well Katy Perry was trying to be that weird quirky self that she puts on for the cameras and said that the only thing she hasn’t done is shave her heard and have a public breakdown. After that statement she quickly said that she didn’t want to stir up controversy.

Well bitch you just did. Now you have that Britney army of fans after you.

All that I can say is that Twitter exploded after Katy’s comment because it was kind of uncalled for. Instead of making fun of Britney’s public meltdown, let’s praise her for being able to make such an amazing come back.

Or is it more fun to just shit on people no matter how far they have climbed from rock bottom?

Shame on you Katy Perry, you say your an advocate for mental illness yet here you are making this comment, then admitting that you’re not there to stir up controversy. You know exactly what you’re doing.

Britney has enough trouble putting that behind her, she doesn’t need other singers bringing it up.

There have been so many celebrities out there who have always said that Britney is nothing but humble and kind. She is rarely brought up in controversy ever since that JT mess blew over.

One final thought, don’t say you’re an advocate and then not follow through.

We should expect either an Instagram note apology or a few tweets apologizing because we all know Katy needs to remain her fake persona, the quirky, fun persona.

Let me know what you think of the whole thing by hitting the Facebook or Twitter button below!