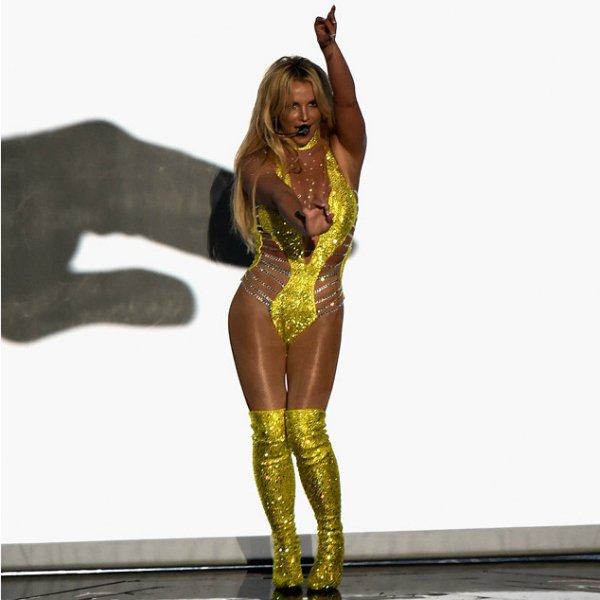 You can say whatever you want about Britney. You can pretend that you didn’t know that Britney has been lip syncing since 2001, you hate on it, whatever. I will say that I was happy with the performance. Am I happy that it was so short? No. Am I happy that Beyonce went on before Brit and tried to steal the show? No. I am happy because Britney, who admits to developing stage fright through out the years came out, danced on her own for the first minute, and killed it. She looked so confident and she just absolutely went out there and did what she was there to do. She entertained.

I have written about it once, I will do it again, we need to leave Britney the hell alone. We get it, people don’t like her for whatever reason. Truthfully other than her issues on 2007, there haven’t been that many bad reports on Britney. Everyone talks about how humble she is and how kind she is, something you don’t hear about often in Hollywood. Back to the stage fright thing, no wonder she developed it. The media loves to rip her apart. They don’t want to talk about how good she looks after having two children, after all that she has been through. No, they want to bash her.

Britney has had two knee surgeries too so stop that with the whole dancing thing, let her be.

I will say, I don’t know if Brit’s heart is in the entertainment world anymore, but she is out there doing it. Just let it happen. She is a living icon, whether you want to believe that or not.

My final though is screw you MTV. You want to make a big deal about Britney being on your show for the first time in 9 years. You want to make it seem like she is going to have some insane performance, but you don’t give her the time to do so? Okay. I understand you’re up Beyonce’s ass but come on? You give her 15 minutes and you give Britney like 6 minutes after basing so much promotion around her being on the show? I see you little fucking sneaks.